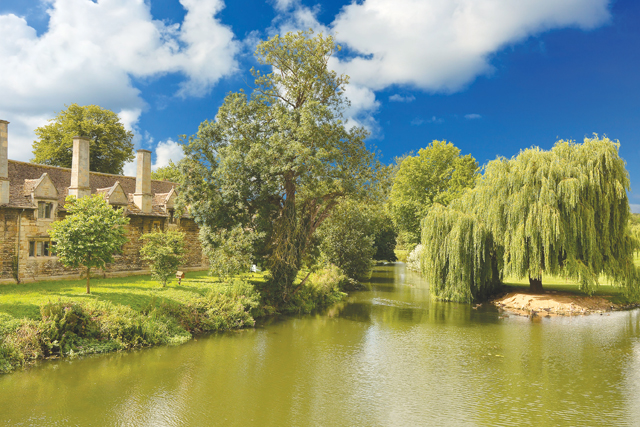 Barely eight months after it was heralded as the UK’s Best Place to Live, it seems that Stamford is seeing the proof that it is on everyone’s radar – from homeseekers to tourists and new entrepreneurs.
Estate agents say there is a real buzz on the property scene, tourism chiefs are reporting rising visitor numbers and new businesses are moving in. At the same time, major investments are underway on the educational and sporting fronts, thanks to important projects winning substantial financial backing.

When it comes to shopping, this is a town which has always been a magnet for new and expanding businesses. As a result there is also a superb mix of family-run, niche businesses and national stores to enjoy.

There is plenty of entertainment on offer too, with the Stamford Arts Centre and Stamford Corn Exchange Theatre leading the way and the town has a number of lively community and artistic groups adding to its unique ambience.

It was in March that Stamford was voted the best place to live in the UK by the Sunday Times – at the same time Grantham (also in South Kesteven) was placed 12th in a Top 20 list of best commuter towns to the capital. So what are the estate agents saying?

“Mortgages are getting easier to come by. We have excellent schools, good amenities and Stamford is a safe and attractive town. People are also prepared to travel some distance to their place of work, whether that be Peterborough, Corby, Northampton or Lincoln.

“We also have few empty shops and we still have a good mix of independent traders adding to the retail experience and people are still coming and spending their money,” added Mr Leech.

The owner of Moores estate agency, Vernon Moore said: “I am glad to say that our Stamford branch has seen an increase in business and the town’s growing profile has brought people in from the south and south east, who have decided that Stamford is definitely worthy of a closer look.

“An example is a retired couple who have downsized by moving from Guildford to Easton-on-the-Hill, just outside of Stamford, after realising they could get a great property and still be within driving distance of family members living in London and York.

“People in London – particularly Greater London – are seeing their houses rise in value. Where they have formerly looked at moving within the Home Counties, they are now searching further north in order to get more for their money.

“They are being attracted by the good schools, the quality of life, the fact that it is now easier to work from home, but also that they can easily commute north or south.”

The South Kesteven district was also named one of the 50 best places to live in the UK, in the 2013 Halifax Quality of Life survey, which explored factors such as residents’ health, life expectancy, earnings, employment, crime rates, weather, traffic and broadband access.

South Kesteven District Council is keen to create vibrant communities where people want to live, work and invest. Council leader, Linda Neal said that in the case of Stamford it means preserving the jewel in the district’s crown, which will continue to thrive as a business centre, whilst still attracting visitors keen to explore the town’s magnificent architecture.

“We are extremely fortunate to have a town with the character and beauty of Stamford within the district. We have always known it’s a fabulous place to live, but this (survey findings) confirms it on a national stage.

“It looks like another of our best kept secrets is out. We shall do all we can to build on that to promote the town.”

On the tourism front individual enquiries for June, July and August at the Stamford Tourist Information Centre rose by at least ten per cent on last year’s and it is now welcoming at least twenty coaches per week, compared to ten last summer. More town maps than ever have also been handed out.

For shopaholics, there is always something new to enjoy, as fresh names move in, joining long-standing independents such as Sinclairs in St Mary’s Street – which is thirty years old next year – Lambs, Rapport, Black Orchid, Colemans and Dawson of Stamford, to name just a few.

As we went to press, more new retailers were preparing to snap up outlets in the town centre and commercial agents were on the brink of signing up tenants for other vacant premises.

People in search of individual gifts will also be interested in the fantastic mix of products made by members of the Stamford Artisans Guild, which range from jewellery to paintings, cakes and preserves.

Guild members show and sell their work at regular fairs and readers are invited to catch up with them at Stamford’s Own Handmade Christmas Market at the Stamford Arts Centre on 1st December.

The town is also about to benefit from investment in educational and sporting facilities, which will benefit young people with learning difficulties, footballers and students who are keener on vocational than academic subjects.

New College in Stamford has won £263,000 to improve facilities for students with learning difficulties and another £1.3m for a project which will make life easier for students who are enthusiastic about vocational subjects.

The Drift Road College is also a partner in a three-way consortium – alongside Stamford Association Football Club and the Burghley House Preservation Trust – and they are working together to develop a £5m sporting and educational complex.

Stamford area parents could also have a wider choice in their children’s secondary education from September 2015, if Stamford Free School campaigners are successful in an application which is being submitted to the Department for Education in January.

It seems that Stamford is somewhere that has something to offer people of all ages, thanks to its great shopping, range of services, community spirit and lively events.

“Any vacant shops that we have are quickly taken up. We are really blessed in that respect, and our independent and niche outlets are key to our uniqueness.

“Events coming up include the Stamford Georgian Festival (27th to 29th September) which will celebrate the town’s architecture and heritage and, on 14th November, the town will applaud the Homecoming of No 3 Squadron, whose members will march through the town, following their latest tour of duty.

“Stamford is also celebrating its traditional Christmas Festival on Sunday, 1st December, where people can enjoy a seasonal market combined with the switching-on of the town’s lights,” added Mrs Stuart-Mogg.

NEW SCHOOL CAMPAIGN
Campaigners driving to get a new school for Stamford – which could become a reality in September 2015 – are thrilled with the support they have received from families living in and near the town.

Stamford Free School Group only launched its campaign for a new secondary school (with a sixth form) in March but, within two months of starting to get the word out, parents had signed up more than 1,000 children.

Now, while that figure continues to rise, members of the school Proposer Group are busy drawing up the formal application for the school – which has to be submitted to the Department for Education (DfE).

Free schools are directly funded by the DfE and are independent from local authority control, although Stamford is bordered by four different councils and campaigners have so far shared their plans with Lincolnshire and Rutland County Councils.

Parent member of the Proposer Group, Daniel Evans said: “Two-thirds of parents came to our website via Facebook, although we also had a big article in the local newspaper and we hold various events.

“We asked parents interested in the school to give us their children’s names, ages and their home postcode. A lot of them are from Stamford, but we also have support from people living in the surrounding villages.

“I think we all instinctively believed there would be support but we are definitely encouraged by the response,” said Mr Evans.

Applying for DfE approval involves a rigorous process, whereby campaigners have to prove they have the capacity to open a school, but group members include an experienced ex-headteacher and a solicitor.

“There are three windows of opportunity when we can apply to the DfE – January, September and May – and we are submitting our application in January,” said Mr Evans.

“The Education Funding Authority, which is part of the DfE, has funds set aside for 180 new schools next year and our goal is to be one of them. We could hear the outcome of our application by April. If successful our first intake of students would be in September 2015.”