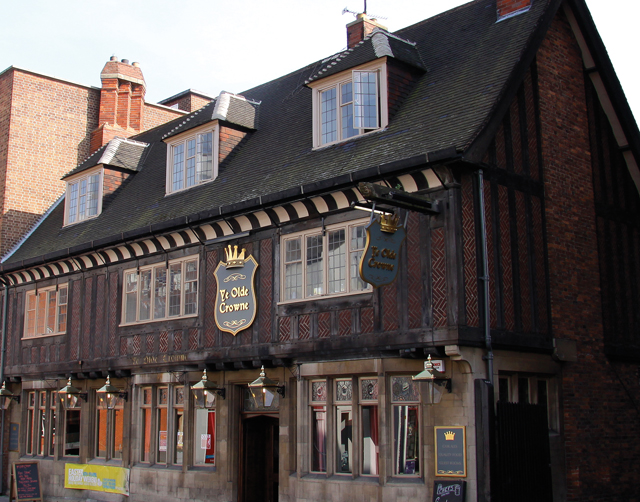 Ye Olde Crowne public house in Lincoln is a familiar feature of the city centre, and has a fascinating history that illustrates the influence one property can have on a street, and how fascinating the investigation of a building’s history can be.
The building presently situated on what is today Clasketgate is a 1930s construction that replaced a building with a history traceable back to 1747. The Lincolnshire Archives holds deeds, maps and other documents that show the changing use of the building, and how that use impacted on the geography of Lincoln.

Deeds dating from November 1747 show the sale of a ‘…messuage or tenement and yard or garden and stable…’ on St Lawrence Lane to William Colton, butcher of Lincoln. Terms like ‘messuage’ can be easily deciphered using books available in our Search Room; a ‘messuage’ being a legal term for a dwelling house, with its outbuildings and land. William Colton was obviously expanding his business, as when the property was again sold in 1773, it also incorporated a slaughterhouse, and is described as being on ‘Butchery Lane’. It is therefore highly likely that William Colton’s addition of a slaughterhouse changed the name of the street from St Lawrence Lane to Butchery Lane. The presence of a butchery at the site of what is today Aquis House next to the Crown continued into the mid-twentieth century.

In addition to deeds, a variety of documents can be used to trace the history of a building. If the names of any individuals associated with the property are known, wills and other probate material can describe the buildings, and give colour by indicating social status and family relationships. In 1796 Mr Samuel Shuttleworth, innkeeper, took possession of the property, which was then sold following his death in 1802. Mr Shuttleworth’s will describes it as an inn ‘…known by the name or sign of the Crown…’, and leaves it to his wife Ann. Therefore, the site has over two hundred years of history as a public house. It would seem Mr Shuttleworth was a successful innkeeper and a man of substantial means, leaving his children and wife well provided for, stipulating that his wife should sell the Crown and live on the proceeds of stocks and securities purchased.

Historical Trade Directories, which are the ‘Yellow Pages’ of their day, are useful for identifying the historical use of a building and associated people. The University of Leicester website www.historicaldirectories.org provides a searchable set of county and city directories dating from the nineteenth century. The 1856 White’s directory shows that the ‘…sign of the the Crown…’ is now known as the ‘Old Crown’, and the proprietor is Richard Hunt. Mr Hunt was still in charge in 1868, and the directories can help find the occupants of a property on the census.

At Lincolnshire Archives the census can be searched for free on www.ancestry.co.uk. In 1901, James W Pogson was resident at the Old Crown Inn, with his wife Agnes and four servants. Mr Pogson is thirty-six years of age and described as a licensed victualler (innkeeper who supplies meals), employed on his own account. In 1911, Mr Albert Spray of Southwell took over, and lived with his wife Ellen and son James Albert.

For the house historian, the Ordnance Survey maps are a great starting point, as they are easily cross-referenced with modern maps. Historical Ordnance Survey maps can be found on Lincolnshire County Council’s new website, Lincs to the Past (www.lincstothepast.com). This website contains over half a million images of parish records, museum objects, maps and photographs – copies of which can be purchased. The site enables the catalogues of the county’s archives, museums, local studies libraries and Tennyson Research Centre to be searched. Online exhibitions and learning resources are also available covering the whole of Lincolnshire and its rich and varied history.

The 1910 Finance Act, otherwise known as Lloyd George’s ‘Doomsday’ survey, constituted the first full and detailed survey of land ownership in the United Kingdom. The paperwork generated forms a snapshot of Edwardian Britain. By this time the Crown had passed into the ownership of James Hole and Company, brewers of Newark, and was valued at £3000. Particular to premises that have been licensed, constabulary records can shed light on the business of a hostelry. Between 1949 and 1969 the Crown had twelve proprietors, a market day opening extension and was granted a gaming license in 1967.

Today’s Ye Olde Crowne is a mock-Tudor building of the late 1930s, designed by architectural firm Traylen & Lenton for James Hole and Co. Photographs taken during the early part of the twentieth century included with the plans drawn up by the architects show the Crown as it was before being rebuilt. Comparison of the photographs and plans shows that the architects have incorporated elements of the original building in the new one; three dormer windows seen on the photographs are seen on today’s Crown. The plans show the Crowne was built with a tap room, public bar, saloon bar and smoke room; this layout reflects some interesting social aspects of the public house. The saloon or lounge was regarded as a more ‘middle class’ room, and often hosted entertainments. The tap room was the preserve of the working man, and was a refuge where men could come in their work attire. The smoke room, or ‘snug’, offered a secluded drinking space for those seeking privacy, with drinks sometimes costing more.

Lincolnshire Archives is open 10am – 4pm Tuesday to Saturday, and admission is by appointment and valid readers ticket. Please call on 01522 782040 to arrange a visit. We have prepared materials including a flowchart and guide to our sources to help the house historian, and staff are always available to help.