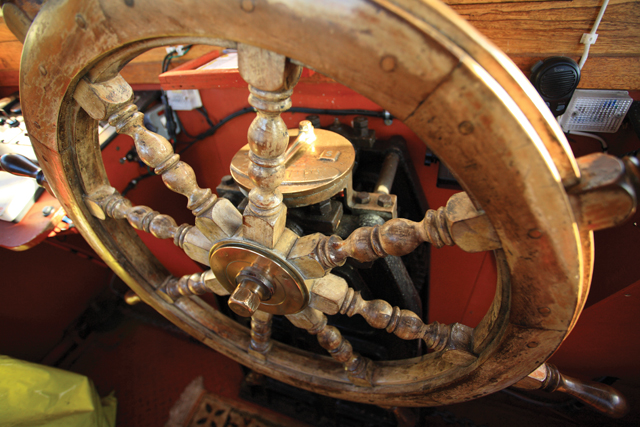 With its soaring mast and fluttering red pennant, the super sloop Spider T is a familiar sight at Keadby Lock. When skipper Mal Nicholson took it on, however, it was practically a sunken hulk, holding three feet of water. He knew it was something special though: “It was very Brunelian, that is to say, it was over engineered in the same way that Brunel built things.”
In so doing, he salvaged part of our maritime heritage that was almost lost forever.

Over the years he has transformed it into luxurious Edwardian-style living quarters. Asked how long it took to renovate, he replied: “Well, so far fifteen years.”

It is definitely a work in progress.

The Spider T was built in New Holland in 1926 at the Warren family shipyard; the sloop having been designed by Frederick Warren. Not only was the Spider T one of the last sail-powered cargo vessels to be built in Europe, it was the largest sloop built to that specification and launched as a ship – being a foot deeper than her sister ship, Zenitha.

Mal is an ardent champion of the old ship-building and maritime traditions; he has even taught himself to navigate by the stars. He and a team of craftsmen used the white-hot rivet technique to repair sections of steel plate on the hull; a system which died out over fifty years ago.

The sloop uses wooden teardrop deadeyes which hark back to the Vikings. These work as rudimentary shock absorbers by cleverly distributing the energy of stormy seas down through the rigging and into the hull. The great barrel winch situated in the prow is also built on time-honoured principles; even with over 100 tons of cargo on board it is able to withstand the notoriously fast tides of the River Humber.

Sloops were developed from eighteenth-century keels designed to cope with the shoal-riddled waters of the mighty river – one fifth of the country’s fresh water is drained off through the estuary. They would deliver bulk cargoes between the Humber ports such as farm produce from Lincolnshire, phosphates from Hull, cement and chalkstone from Barton-upon-Humber and South Ferriby, as well as delivering oilseed rape to Yarborough Mills in Brigg.

The Spider T was used to carry bricks around the river and along the coast for Foster’s Brickyard at Barrow Haven, working until 1972. It was last fully rigged in 1939.

The super sloop attracts both a regional and a global following; fans in Canada and New Zealand make models and write articles, Tall Ships and Traditional Sailing Ships in California know of her; there is even a huge Chinese contingent. The website – http://www.spidert.co.uk – attracts between 10,000 and 20,000 hits a month. It was ranked Flagship of the Year by National Historic Ships or, as Mal puts it: “I hear from people from Iceland to Polynesia.”

He was also honoured to take part in the Diamond Jubilee River Pageant, which was fitting as the sloop was launched in the year of the Queen’s birth.

Mal said: “That was very special. I was woken at 5am by a TV crew and I did thirty-five interviews that day with the BBC World Service, Sky TV, ITV, as well as others from abroad.”

He has twice undertaken the 700-mile trip to Arbroath in order to take part in the annual Seafest; the last time was to celebrate the 200th anniversary of the Bell Rock Lighthouse.

Mal is starting a training programme offering disadvantaged children a whole new experience, relating to the sea and historic ships, as well as being the standard bearer for the Sailors’ Children’s Society.

As the Spider T is privately owned, Mal receives no financial assistance, so costs are an ongoing challenge. In order to raise funds for its upkeep the Spider T is open to the public. Mal also throws onboard dinners for the Old Maritime Secret Supper Club, which includes guests from the Humber Keel and Sloop Preservation Society and the Humber Yawl Club, as well as giving talks on anything from the Spider T to classic Ferraris – Italian motor cars being a speciality.

There is a busy year ahead, with plans to sail up the east coast, as well as taking part in Seafarers Awareness Week. In other words: work in progress.