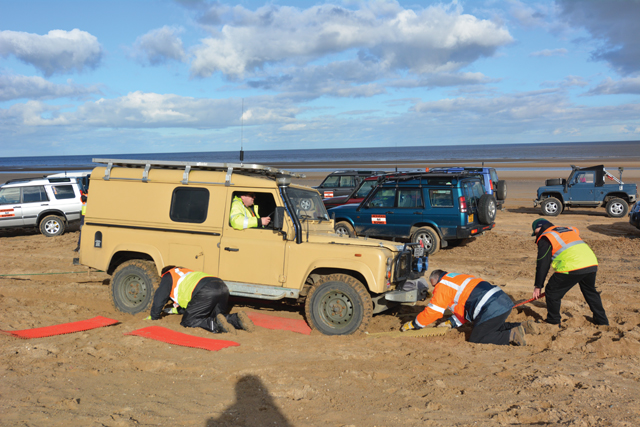 The volunteers of Lincolnshire 4×4 Response

Four-wheeled-drive vehicles are often the workhorse of choice for farmers, caravan owners, landscape gardeners and people living in remote and isolated areas but they are also preferred by many who simply feel safer behind the wheel of a 4×4 vehicle.
It’s a feeling borne out by fact, according to the Transport Research Laboratory, who found that 4×4-vehicle owners are thirty per cent less likely to be involved in an accident than drivers of any other car.

Whatever the reason or preference for ownership, some 4×4 drivers in the county have joined the volunteer group Lincolnshire 4×4 Response, to use their vehicles to benefit the wider community. The group is part of a national organisation, 4×4 Response UK, representing thirty-two groups in many of the counties of Great Britain from the Hebrides to the Isle of Wight.

The Lincolnshire group, comprising around sixty members, operates a system of deployment designed to aid the Emergency Services, Health Authorities, Meals on Wheels and registered charities such as Marie Curie and Macmillan nurses, during times of severe weather. In the past, they have delivered many hot meals, rescued snowbound cars and transported health workers to their patients in conditions unsafe for conventional vehicles.

However, as Lincolnshire 4×4 Response chairman Steve Goldsbrough is quick to point out: “We don’t respond to calls directly from members of the public. We provide assistance in the community whenever we can, but only when we’re officially deployed in response to calls from authorities, service organisations and charities registered with us.”

Official deployment, on a different scale, is also a distinct possibility through the group’s active membership of the county’s emergency planning structure. Recent exercises with emergency planners have included scenarios involving east coast flooding, railway disasters and village evacuation in emergency conditions. According to Steve, assistance in such emergencies fulfils the core aim of the group to provide go-anywhere transport when it is needed most.

During the flooding in the Somerset levels in 2014, Wessex 4×4 Response and their counterparts in neighbouring counties were deployed to assist the emergency services for eight weeks, twenty-four hours a day, covering around 19,000 miles. More recently, in Cumbria, North West 4×4 Response and Lothian 4×4 Response toiled day and night to assist the relief agencies in the region. These are extreme examples, far from the norm, but they demonstrate the commitment, networking and capabilities of the county membership of 4×4 Response UK.

Closer to home, Guy Roscoe and Bill Evans of Lincolnshire 4×4 Response recalled their deployments in Lincolnshire last winter. Guy helped a Marie Curie nurse to reach her patients in the county during a spell of heavy snow during Christmas 2014. He had to drive his Land Rover through deep snow from Harmston to Lincoln, descending Canwick Hill which severely tested the vehicle and its winter tyres.

“There must have been four or five cars abandoned at the bottom of the hill having given up trying to ascend. At Lincolnshire 4×4 Response we train on the soft sand of Mablethorpe Beach and in a number of quarries around the county. This helps us to explore both our own and our vehicles’ limitations in a controlled environment. All of this experience is transferable to any response situation we may ﬁnd ourselves in.

“I found my way to the nurse’s house and got her to the hospice, only to ﬁnd the day shift was stuck there with their cars snowed in. The next job was to get them all home as they were due back on shift in less than twelve hours. We travelled the breadth of the county taking in Holton-le-Clay, Louth, Mablethorpe and what seemed like everywhere in between. I can’t praise the Marie Curie nurses enough. They have a superb ability to provide ﬁrst rate palliative care to their patients and their families in what I can only imagine are the hardest times of their lives. Nothing was too much for them.”

It’s no surprise that the Marie Curie nurses have a similar view of the dedication and care that Guy showed towards them, on behalf of Lincolnshire 4×4 Response.

Bill Evans’s story began when he was deployed in January 2015, to take the father of a child to the Paediatric Intensive Care Unit at Sheffield Children’s Hospital in response to a call from Macmillan nurses. Bill found it difficult to find the address because it was on a Lincolnshire caravan site, without signage, that had closed for the winter. It was only due to Bill’s persistence that he finally found his passenger.

He recalls: “The gentleman could speak very little English and due to the nature of the journey the conversation was understandably minimal and subdued, but there was no doubting the sincerity of his gratitude for transporting him safely to Sheffield. Due to the weather conditions, it took three hours to reach Sheffield and a further three to return home.”

Bill felt that the call-out went well despite the early difficulties and the adverse weather conditions and was pleased to have made a positive difference to the lives of those involved, at a time of greatest need.

Membership costs £25 per year and training, provided by experienced Responders, ranges from the use of trailers to traction aids of vehicles, vehicle recovery, and green laning. Drivers are reimbursed for fuel on call-outs and normal insurance covers the group’s activities which are classed as voluntary work.

Meetings are held once per month at three locations spread around the county to give members a chance to meet, exchange views and keep up to date with what is happening.