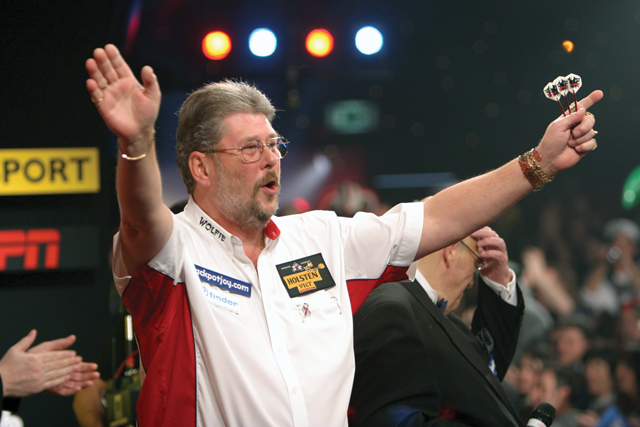 The Wolf Man is still hungry

Having firmly secured his place in the darts hall of fame after three decades in the sport, Martin ‘Wolfie’ Adams admits he actually came into the game almost by accident, but since throwing his first arrow he’s never looked back.
The fifty-six-year-old, who hails from Deeping St James, has an impressive list of achievements to his name since turning professional in 1995, including three world championship titles and three Masters wins.

Captain of the England team, he’s also been named sports personality of the year by several organisations and is a two-time achiever of the magic nine-dart 501 score. Even with all this under his belt, he is still hungry to add more accolades to his resume.

It’s hard to believe the former IT technician’s foray into the world of darts began by chance, some thirty years ago, when a new neighbour in Milton Keynes asked him to help ‘christen’ his dart board.

“His name was Terry Keep and he asked me to come along and play, which I duly did and then he took me along to play at the local pub and it went from there really,” recalled Mr Adams.

“I was just guided by other people who told me I was good. I played for the pub team, and then moved on to Super League and then county level. I started talking to more people and asking questions and from county I went up to international level; it was a long process; it was one step at a time and the international platform provided the stepping stone to the professional ranks, and that’s where I am now – at the top of the tree.

“My first 180 came when I was in Milton Keynes,” he added. “It was a special moment, but each one after has been too. It’s a funny thing though, it either means you’ve done really well to catch up your opponent or it means they’re chasing you now!”

One of the top seeds in the world, Mr Adams acknowledges players at his level need a certain degree of natural ability, but must also remain disciplined and willing to practice.

“When I’m doing exhibitions, I’m playing all day, but at other times I’m putting in at least two or three hours a day – that’s all I do, but it works for me. You have to be dedicated though and that means making a lot of sacrifices along the way.

“When I first started there weren’t the youth structures there are today – the sport was just played in pubs and clubs. But being involved at county and international level means you get to work with the younger players, encourage them and share your skills, and it’s great to watch them grow.”

Mr Adams’ career soon progressed, as he represented first his county (he now plays for Cambridgeshire) and then his country.

“I won a few small things,” he said. “It’s getting that first win under your belt and proving to yourself that you can do it. It was 1994 when it all took off, when I won the British Open.

“The following year I was in the team for the World Cup, we won all the gold medals which had never been done before. Then in the next couple of years there was the European Cup and other ranked events all over the place.

“But I had to wait until 2007 for my first world title – that took me fourteen years to get. It all comes down to who can be the best player on the day; one day you can play really well but the next day you can be really awful.”

Despite being a permanent fixture on the world stage, Mr Adams still competes for local teams, regularly representing the Deeping Sports Club and Deeping Boundary Club.

“All the players know me around there and in the leagues, so it’s not too much of a surprise now when I roll up for the games,” he said.

Playing darts professionally has opened up all sorts of opportunities for the dad of two, that might not otherwise have come his way, including travel. Thanks to his international status he’s been to Australia, Malaysia and South Africa, while a trip to Canada is also pending.

Last year he was privileged to take part in the Olympic Torch celebrations in Oakham and he’s also enjoyed meeting other celebrities through his work – in particular sharing a table with Sir John Mills at an anniversary dinner.

The sportsman moved his family, including sons Warren and Darren, to Lincolnshire back in 1985, when his job in the IT department for Lloyds bank brought him to Peterborough.

It would be easy to assume that this working background would prove helpful in his current career, given the quick mental arithmetic players undertake when working out the scores they need to finish their 501 total as quickly as possible, but this he says, is not necessarily true.

“It’s like anything,” he said. “There’s a knack to it. You can learn all the finishes, just like learning your ABCs, or your times tables at school. There are lots of different strategies, but it helps if you know them and don’t have to think about them too much, you just do them automatically – so you don’t need to be a great mathematician.”

Made redundant a decade after moving to the Fens, Mr Adams decided to stay in the area, which he describes as ideally located for access to the major routes, which he uses to travel all over the country for games, exhibitions and trade shows.

Sponsored by Finder Relays, his sporting nickname ‘Wolfie’ was started by a fellow player at county level who began calling him ‘Wolf Man’, which was later shortened. Thanks to this moniker his walk-on music before a game is the classic 80s Duran Duran track ‘Hungry Like The Wolf’ – pretty apt, since he tells me he’s still as keen for sporting success, just as much as when he first started playing professionally.

So what’s next for our master of the arrows? Well he’s been drawn against Jimmy Hendricks in the first round of the 2013 World Professional Darts Championships at Lakeside between 5th and 13th January, and although he’s seeded number two in the tournament I wouldn’t bet against him retaining his crown.

* Follow www.wolfie-darts.com to keep up to date with Mr Adams’ news.