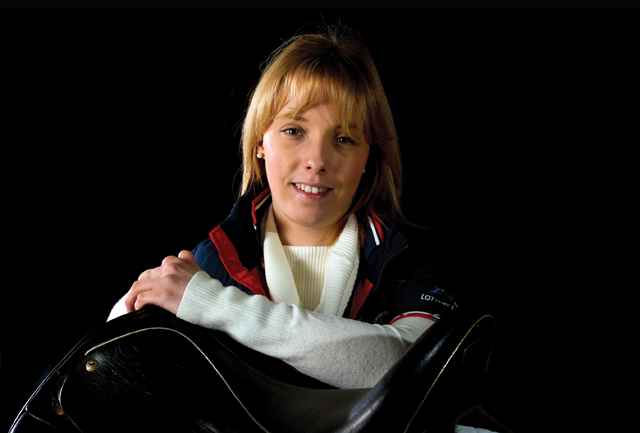 Timed to be at the top of their game

The London 2012 Paralympic Games begin on 29th August. Steve Gibbs interviews two county Paralympians eager to grasp the chance to turn their dedication and hard work into Games glory.
DRESSAGE RIDER – SOPHIE WELLS
As if being a double World Champion by the age of twenty-two wasn’t enough, one of the favourites for Paralympic success this summer has her sights set on making an ever greater impact in her sport.
Doddington’s Sophie Wells has already become the first disabled rider to compete simultaneously in Para-equestrian and able-bodied teams, and hopes one day to qualify for the GB Olympic team.

“Whether that’s a realistic aim is a different matter,” she said rather modestly. “I would have to be very lucky with a horse or win the lottery! To do something that hadn’t been done before was special, and I wanted to prove that para-riders can do it. I was very proud.”

Wells missed out on the 2008 Paralympics following an injury to her horse, Touchdown; an event which has not only reinforced her phlegmatic outlook on life but also strengthened the unique relationship with her equine partners.

“It has added motivation, but it has also added a sense of reality. I don’t take anything for granted with them, I just take one day at a time. I love animals and horses, and the connection you have with such a big animal that cannot communicate by talking gives you a special bond.

“They are animals with their own minds and own moods. They can get up one day, like us, and be in a bad mood,” she said, “but it is down to the rider to notice and change that. Horses have a lot of trust in their rider which is important.”

As with many Paralympians, Wells began horse riding as part of her treatment, for amniotic band syndrome, which restricts the use of her hands and lower legs. Despite an allergy to horses, her burgeoning career appears, to outsiders, as something of a whirlwind.

“It has just progressed naturally,” she explained. “I’m lucky I got the opportunity to ride a horse like Pinocchio (who Wells hopes will join her in London) and he has taught me so much and taken me so far, so a lot is credited to him and his owner, Jackie Walker.”

Also crediting coach, Angela Weiss with much of her own success, Sophie’s ambitions for London 2012 are typically self-effacing – “keep my horses fit and healthy, and show them at the best of their ability” – but when she describes the qualities required to become an Olympic dressage rider – “perfectionist, critical, determined, dedicated, patient” – you realise there is more to Wells than she chooses to reveal.

Both her past record and current form, in winning two golds at July’s Hartpury Festival of Dressage, suggest that a medal is easily within her grasp, even if she wouldn’t admit it.

“It’s exciting that such a big sporting event is coming to our country and we can be involved in it, and make us proud to be British,” she said enthusiastically. “But you can’t control other horses and riders’ performances, or the judges. We work hard every day, and do the best we can, but I do it for the love of my horses primarily.”

FREESTYLE SWIMMER – ROB WELBOURN
On the verge of reaching the pinnacle of their careers, and making amazing feats of human endeavour seem like just another day at the office, it’s reassuring to know that even world-class athletes crave the occasional home comfort.

“No-one enjoys getting up at half-past five in the morning and going swimming, do they?” said four-time Paralympic medallist Rob Welbourn, safe in the knowledge that he would receive no argument. “It’s not a natural thing to do. Throughout the winter, when it’s cold and dark and wet, it is pretty nasty at times.”

About to compete at his third Games, where he will be looking to upgrade two 400-metre freestyle silvers into a first individual Paralympic gold medal, Welbourn is at least familiar with the rewards such sacrifices can bring.

“When you’re stood on that podium at a major meeting with a medal around your neck, that’s when you realise ‘this is what I do it for’,” said the man with nineteen international honours to his name. “All of those mornings where you really don’t want to do it are not significant any more. You just forget about them.”

Still, though, the twenty-five-year-old from Deeping St James, who began his career at the village’s swimming club, is philosophical enough to know that four years of hard work can still be in vain.

He said: “It’s very difficult to go into a Games and say ‘I’m going to do this’, or ‘I want to do that’. Training has been going really well, and I just focus on myself. I could spend all night, or all year, worrying about what my competitors are doing but that’s not going to change anything.

“As long as I come out of that pool at the end of the race and I can honestly say I couldn’t have gone any faster, then I will be happy. I will be looking for personal best times for me, and if that’s enough then fantastic. If it’s not enough I’ll be bitterly disappointed, but at least I’ll be able to say fair play to whoever had a fantastic race.”

With psychology an increasingly important part of an athlete’s armoury, channelling the fervour of a home crowd can provide a vital boost.

“There is potential to feel the pressure but I think it’s something I’ve always dealt with quite well,” said Welbourn. “Being able to take any situation and turn that into something you can use, to focus it into a positive energy and use it to your benefit, is something you need to be able to do.”

Fortunately for Team GB, interest in Paralympic competition is at record levels, and a passionate, partisan atmosphere could be key if our swimmers are to match or even better their 2008 haul of forty-one medals.

Rob added: “Beijing was a fantastic achievement but everyone has really upped their game. I met up with members of the relay squad in Manchester recently and everyone was so up for it and training really hard. The Paralympics has grown dramatically over the last few years.”

“There are some amazing athletes within Paralympic sport, and some of the obstacles that they’ve had to overcome, to achieve what they have, is just unbelievable. To be at the top of your game in the Paralympics you have to put in as much work as you do to be at the top of the Olympics.

“If I said to you that somebody with one arm will swim 100 metres in fifty-five seconds, you just wouldn’t believe it. It’s ridiculous how fast they go.”

Overcoming those misconceptions and even a degree of prejudice is a necessary by-product of sporting success, on local and national levels, and Welbourn is not about to forget his roots.

“Anyone at the Paralympics has followed their dream, and there’s no reason why anybody else, whether it be in sport or education or their career, shouldn’t do the same. If I was ever able to inspire even one person to believe that they could do it, that would be something I’d be really proud of.

“I started at local clubs just as a bit of fun, a bit of fitness, and it took hold. Since then I’ve grasped every opportunity put my way. I wouldn’t say it was easy, but if you’ve got the determination to do it then the opportunities are definitely there.”