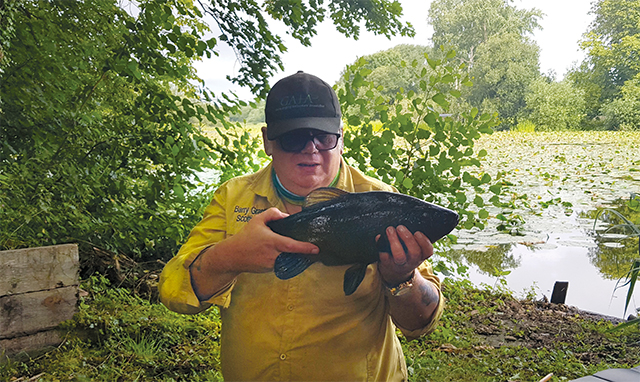 The name for the fish comes from the French ‘tenche’, itself derived from the Latin, ‘tinca’. Hence Tinca tinca.

The tench is an easy fish to identify even for the novice. It has round shaped fins, a tail fin that is almost straight – not the normal V-shape – small orange rimmed eyes and very small scales. They vary in colour from an olive yellowish green to a dark greenish black.

The tench is mainly a summer fish. During the winter they are rarely caught as they tend to bury themselves in the soft mud at the bottom of a lake or river using their powerful fins to cover themselves in the mud. Here they lie dormant until the waters warm in the summer months.

The tench has a reputation for being a doctor fish. It was thought by many of the angling writers of yesteryear that the slime that covers the fish has the power to heal not only fish but certain ailments of mankind.

These old writers used to say fish would gather around the tench and benefit from close contact. They also claimed that the pike, a predator of all fish, would not eat doctor tench. I think it more probable that the tench are mainly at the bottom of the lake in the mud hidden away, not swimming around in open water like the roach and other species. Personally I have not come across any evidence to suggest Tinca tinca is a doctor fish.

Of all freshwater fish in the British Isles the tench is the easiest when it comes to determining sex. You can tell this by looking at the ventral fins. These are the fins on the belly of the fish halfway along the body. On a male tench the fin is large and spoon-like; the female more slender and dainty.

Although coarse fishing is allowed on landlocked still waters I think of 16th June as the start of the coarse fishing season. On the 16th I love to be on my favourite estate lake fishing for tench. There are many ways of fishing for the tench. I prefer to use the old traditional methods used in the 50s and 60s.

The rods I use are all handmade by myself. For the shallow lakes and rivers I use a two-piece split bamboo rod 10ft long and for float fishing the deeper waters, a three-piece 12ft split bamboo rod; the reel, a 1960s fixed spool reel or centrepin; a triangular or pear shaped landing net, again made by myself. The floats would be very simple, made from secondary swan or goose feathers and peacock tail feathers.

I am lucky to have known some great tench anglers: the late Fred J Taylor and Lincolnshire anglers, the late Maurice Ingham and John Ellis. John was secretary of the Tenchfishers, founded in the 50s. The members of that club kept in contact with a rotary letter. Many of my fishing methods are those that were developed by members of the Tenchfishers club.

Tench at times can be finicky feeders. They will play around with your bait and you will see your float bobbing around and moving about in circles without the fish actually taking your bait. When the tench is in this sort of mood, I like to use a method developed by Fred J Taylor – the lift method.

The lift method is a very simple setup. It is a rig that makes the float react as soon as the tench sucks the bait in. I use a piece of peacock quill about 6in long attached at the bottom only with a rubber band. I use one swan shot for the weight and this is pinched on the line about two to three inches from the hook and bait. The peacock quill is set over depth so the line does not go vertical from the bait.

After casting out, the rod is put in two rests and the line drawn taut until the quill cocks. The minute a tench mouths the bait, it lifts the float and it lies flat on the water’s surface. As soon as this happens, the rod is lifted and the fish is hooked.

In certain conditions the method can be scaled down. For instance, two inches of quill and one AA weight.

The reason I use a rubber band to fix float to line and not a wire ring is that when fishing for tench you are mostly fishing near dense weed. If the hooked fish manages to get in the weeds, the float will come off and it helps to avoid getting caught up.

There are many baits that can be used: bread flake, red worm, lob worm, sweetcorn or pink maggot, but my favourite bait is swan muscle. These are easily collected from the bed of the lake.

So get yourself out on 16th June and fish for tench. As well as the estate lakes and fenland drains, Lincoln and District Angling Association has some good tench fishing on its waters. See LDAA’s website for details – www.lincolnagling.org

Do not forget to make sure you hold a current rod licence before fishing.