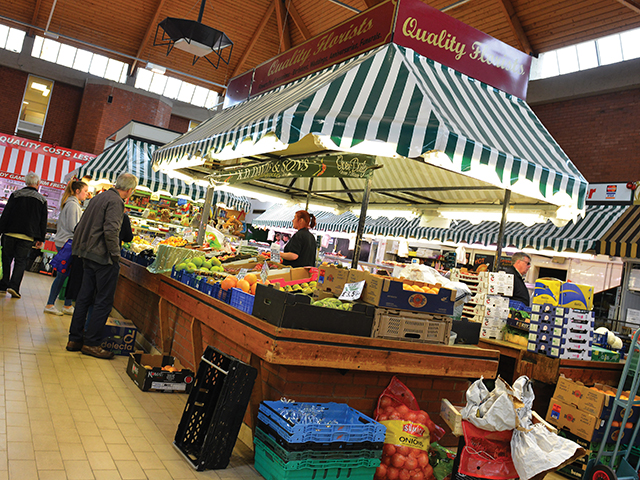 Improvements to local amenities and the expansion of businesses are giving a boost to the growing communities of North and South Hykeham, writes Julie Sayed.

A community Hub in North Hykeham is proving to be a valuable asset in a part of the town that has seen extensive housing development. It is especially welcome in an area that has faced criticism for not having sufficient amenities to support the level of development that has taken place.

The Community Hub in Valerian Place was officially handed over in 2017 and consists of two community rooms separated by a screen which can be drawn back to create one larger room. There are two small office facilities/reading rooms, a kitchen area and sports area with four full-sized changing rooms, each with shower and toilet provision.

North Hykeham Town Council deputy clerk Sandra Green said: “Since the closure of the County Council-run library in Middle Street, we have been able to provide a selection of library services at the Hub. This is run by the Town Council and by a team of volunteers.

“Although it is a community-led library it has a very good selection of books and it is proving to be hugely popular with townspeople. Other community groups use the facility and it is hoped that over time we will be able to increase provision there.”

At present the library only has limited opening hours: Monday, Tuesday and Thursday from 4pm to 6pm and on a Saturday morning from 9am to 1pm.

Another focal point of the town to return this year are the popular music concerts held on the Village Green throughout the summer months. On occasional Sundays in June, July, August and September the Town Council hosts live events, usually with two different bands playing on each occasion.

These play host to a variety of musical genres from pop to blues and people are encouraged to go along, take a picnic and enjoy an afternoon of entertainment in the warm sunshine. There are usually food sellers and play facilities for children too, so you can enjoy the afternoon in full.

“No dates have yet been firmed up for the concerts but they are advertised around the town in advance,” said Sandra.

The Terry O’Toole Theatre, meanwhile, continues to attract visitors to the town. The arts venue, which forms part of North Kesteven School, was named after the former headmaster, whose dream it was to open a theatre venue in the town.

Forthcoming events include Angel Heart Theatre’s puppet show Snow White: The Return of the Little Things on 16th March and a Showcase of British Country Music on 23rd March.

All the schools in the Hykeham area boast excellent reputations and are just one of the reasons families move to the area.

As well as the North Kesteven School, North Hykeham, there is also the Robert Pattinson Academy for senior students and Ling Moor, Fosseway, All Saints and Manor Farm Primary schools for younger pupils.

North Hykeham has grown considerably over the years, from its location mainly around the Village Green to the larger urban development that it has become.

Due to its individual growth spurts over the years, shops and businesses have sprung up in three main areas – at The Forum, around the Village Green and at the Crossroads.

At The Forum shopping centre a new independent butchers shop Forum Quality Meats has recently opened. This is creating quite a buzz in the town and it adds to the list of easily accessible amenities that the centre precinct offers, which also include a post office, bank, Tesco Express, dry cleaners and a highly popular coffee shop.

In fact, locals in Hykeham are spoilt for choice in terms of shops and businesses and this means the town can be more or less self-sufficient.

North Hykeham is also home to a large number of commercial and light industrial businesses with the majority of these situated in the Station Road area of the town.

The Railway Station is also located here and the expansion of its car parking facilities have been greatly appreciated by rail users.

The rapid expansion of housing in North Hykeham means that parts of the town now butt up close to its neighbour South Hykeham. South Hykeham is much smaller by comparison and is more spread out with the area around the green and the Grade II listed church of St Michael retaining very much a village feel. It has its own primary school but few of the facilities of its larger neighbour.

A lot of commercial villages have been established in South Hykeham, particularly in the area close to the A46 bypass. Here there are a cluster of garages, fast food outlets, pubs and even a hotel and spa.

One of the earliest businesses to become established in the area was Pennells Garden Centre, which today is run by Richard Pennell. Over the years the garden centre has diversified greatly and today less emphasis is placed on the plant side of the venture.

“Of course, plant sales and garden furniture and equipment remain part of the core business but over the years we have diversified with the addition of a butchers and food hall,” said Mr Pennell.

“We also offer leading labels’ fashion wear, shoes and our extensive restaurant has always proved to be a popular attraction. Over the festive season our Christmas display attracted large numbers and it is this diverse offer that we will continue to deliver.”

Pennells also have a Garden Centre at Cleethorpes and last year it took over the Four Seasons Garden Centre, south of Sleaford.

“We have rebranded the new venture Pennells Four Seasons Garden Centre and Farm and haven’t really made any major changes to what was already a very well run business. We think this enhances our offer and we are delighted to add it to our stable of businesses.”

As to future changes, Mr Pennell says they are taking a cautious approach until the current business climate becomes clearer.

BLOOMING GOOD STUFF
Spring is here and what could be better than refreshing elderflower cordial, served in an ice cool glass? Made with freshly picked blooms and infused with natural lemon juice, there’s nothing more delicious on a warm day in the garden.

Belvoir Fruit Farms in Bottesford, near Grantham, has been infusing its famed elderflower cordial for decades, based on a beloved family recipe.

Pev Manners is managing director of the farm, but it is with his mum, Lady Mary Manners, that the story really begins.

“There was always a jug on the kitchen table when I was growing up, so it’s a taste of home for me,” says Pev.

The cordial’s fresh delicate flavour was adored by close friends and family. In 1984, this admiration gave Mary’s husband and Pev’s father, Lord John Manners, the idea to start selling it to the public. And 35 years later, it’s being stocked and sold across the country.

It’s still a simple combination with just sugar, water, fresh elderflowers, real pressed lemon juice and citric acid. The only change is that rather than infusing the elderflowers in china bowls on the kitchen table, they are steeped in large stainless-steel vats in a specially built ‘infusing room’. The recipe, however, has remained the same and Pev believes that’s why it has flourished.

“It’s all about the simplicity of the recipes. We use real fruit juice and real flowers,” he explained.

The elderflowers are harvested from the family farm and the month-long harvest normally starts at the end of May, but the weather plays its part. A sunny spring and enough rain to keep the bushes watered but not waterlogged is perfect for plenty of blossom.

From the Manners’ dinner table to kitchen cupboards across the country, the delightful drink has retained its great taste and natural flavour.