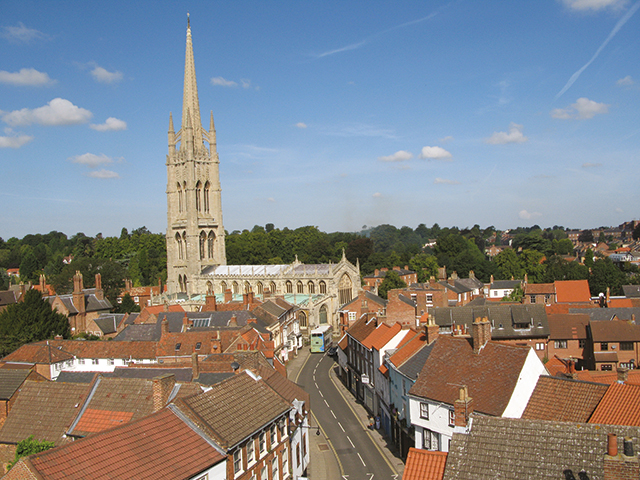 Louth is right at the heart of the Wolds and is determined to become an authentic food town and complete shopping experience.
Action is being stepped up to raise a county market town’s profile and boost its economic fortunes.

The Louth Town Partnership, which is made up of representatives from shops, other businesses, community and charity groups, is encouraging more traders and individuals to get on board its drive to make this bustling Wolds’ destination more successful.

Encouraged by town centre manager, Mark Barnes, who was appointed by East Lindsey District Council last year, the Partnership is determined to make Louth the natural choice for shoppers and visitors from a wide catchment area.

And Mr Barnes is now urging everyone with Louth’s interests at heart, to feed him with as much information as possible for a bright and breezy new website.

The idea is that this will act as a focal point and an online forum where people can share information and news about events and also ‘debate’ topics, such as proposed developments, which could have a major impact on the town and its traders.

While this project gathers pace, members of the Partnership’s Food and Drink Group are hard at work, putting the finishing touches to plans for the town’s Victorian Fayre on October 31.

Then it will be time for this popular market town, which prides itself on offering something different and quality service, to gear up for its traditional Christmas festivities. The town’s Christmas Market takes place on December 5.

Mr Barnes said: “Businesses, community groups and residents all want to see the town become self-sufficient. Now, if shop units become empty or there are particular issues affecting Louth which need addressing, the community – through the partnership – can have its say.

“The new website will be dedicated to the town and its immediate area. The Partnership plans to showcase every aspect of Louth to visitors and also potential investors, as well as reminding local people what a great town it is.

“It will feature sections on what it is like to live in and visit the town, events and meetings, sport and leisure, shopping, the Food Town initiative, businesses and jobs, as well as blogs and forums,” said Mr Barnes.

“An important aspect will be the promotion of Louth as a business and lifestyle choice, so that we, as a community, can target the businesses that we think fit the town and enhance what is already here.”

Mr Barnes said a key aim is to allow people who live and work locally to make decisions about how they want their town to look and function in the years ahead.

Mr Barnes acknowledged that the Partnership is ‘new’ but he added that it is vital that everyone works together for success, rather than get left behind.

“It is hoped that the whole town will become involved and offer information as well as debate. At last, everyone can be involved with the Partnership and the wider community without even having to leave home, but first I need help from everyone with finding content.”

Mr Barnes wants to gather information about schools, clubs, community groups, special interests, local heritage sports groups and clubs, living in the town if you have disabilities and much more.

“Basically, if you live, work, learn and visit Louth, you have information that we need,” said Mr Barnes.

Members of the free-to-join Louth Business Group will also have details about their enterprises included in an on-line directory, at no cost – and be able to contact each other and network via a secure forum.

The Partnership will also continually want up to date information about what is going on in the town.

Mark Barnes is appealing for information to be sent to him as soon as possible preferably by email to mark.barnes@e-lindsey.gov.uk or he can be contacted on 07917 628149.

Louth has a population of about 17,000 people and a very diverse mix of shops, including long-standing names, such as Eve & Ranshaw, Luck’s of Louth and Peter Rhodes. Many traders have carved an excellent
name for themselves by concentrating solely on foodstuffs.

“In fact, all the traditional Lincolnshire favourites, sausages, haslet, chine, plum bread, are made and sold in Louth, virtually all from local ingredients,” he said.

Among names which immediately spring to mind are Meridian Meats, The Cheese Shop, Lakings of Louth (butchers) along with the baker Pocklington’s.

“Our aim is to put Louth firmly on the map not only as an authentic food town, but also has a complete shopping experience. We are fortunate in that so many of the traditional family businesses here are still well-supported by the people of Louth and its network of surrounding villages,” said Mr Neville.

Sarah Harris runs Forbes in Eastgate, which sells both womenswear and menswear. She is one of the business representatives on the Louth Town Partnership.

“Louth is a fabulous place. I actually think that people who are here, whether residents or in business, actually don’t realise how great it is.

“Having lived elsewhere, I can tell you it is almost unique with its variety of independent shops.

“It is a great place, but there is a need for people to realise that the world is changing and we need to move with the times. I feel there is a lot of potential here if everyone works together,” she said.

Sarah believes that the Partnership can make a real difference and that it will quickly gather momentum.

VICTORIAN FAYRE ON THE CARDS
Less than six months after its formation, the town’s Food and Drink Group is really making its mark on the town.

Group chair Patrick Neville said: “A Harvest supper was held in St James’ Church in the first week of September, to showcase every aspect of the town’s food production and diversity, and it attracted more than 300 people.

“Our Victorian themed fair takes place on October 31 and we hope it will be a winner for locals and visitors alike.

“We are asking people to dress up in Victorian costumes and create a period atmosphere in the town centre and we want to replicate the sort of entertainment that people enjoyed before there was television and mobile phones.”

The Fayre will feature around 50 stalls, selling everything from speciality foods to bric-a-brac. Entertainment will include Punch & Judy, a fortune teller and a fairground organ.

ON THE BALL…
It is not often that we feature football in Lincolnshire Life but Louth Town Football Club hardly ever seems to be out of the headlines. The ambitious plans for the club include achieving League status alongside Lincoln City but for the local community there are even more beneficial plans since the club is currently forming an academy to provide football at all levels from under-8s to senior, for women and girls and also for those who come under the category of special needs.

Club Development Consultant Bernard Bale explained: “The club has a great deal of ambition but these are realistic ambitions and will benefit anyone who has an interest in playing football at all levels either for fun or as a potential career or anyone wishing to coach, manage or simply watch. Once we have reached the full level of this scheme it will prove to be of massive benefit to the town and once we reached the Football League it will also provide quite a boost for the local economy.

“We are also interested in talking to organisers of other sports in the area to be able to help them wherever possible whether they play rugby, ride horses, play bowls or swim. We can all help each other.”

DID YOU KNOW?
Did you know that public hangings once took place in Louth’s market place? Many miscreants met their end at the end of a rope in public ceremonies which attracted quite large crowds. Of course in those days they were not overlooked by bargain stores and charity shops and life is so different now. But, when you wander through the little maze of stalls in the market square itself don’t forget to duck in case your head should brush against a foot that was once suspended there.

LIONS AT LARGE
Big-hearted Lions are still roaming around Louth, where they have raised more than £10,000 to help good causes.

This year, Louth & District Lions Club members are celebrating 42 years of serving the local community – and they are delighted at the support they continue to receive from people for their many events and activities.

But member Colin Wooding said: “We don’t just fundraise or put on various events. We try and assist with local community projects.

“We regularly supply drivers to the local Gateway Club, have support local families in need, practically and financially, and have taken guests to the Louth Playgoers’ pantomime and musical each year.“

At the moment the Lions, together with Louth Rotary and Round Table are working On the popular Louth Bonfire, which this year is due to take place on Saturday, November 6, at the town’s Deighton Close Field.

“Our thanks go to the local farmers who provide us with the opportunity of a safe Environment for this display,” said Mr Wooding.

The Lions’ Christmas Market (December 5), is one of the group’s biggest events and seems to be growing year-on-year.

“Local craft and produce stalls fill the whole of the town centre, and there is entertainment throughout the day,” added MrWooding.

All this comes on top of an already busy year. The Lions, once again, staged its highly successful Tractor Road Run in June, in conjunction with the Grainthorpe Playing Field Committee.

July saw the Lions team-up with Louth Round Table to organise a tournament at the Louth Golf Club, which raised money for several local charities.

And Louth Lions has continued to support the local Community Larder project, which supplies food boxes to local needy people, on a referral basis. The group has done this with the support of Louth residents and the Lincolnshire Cooperative Society.