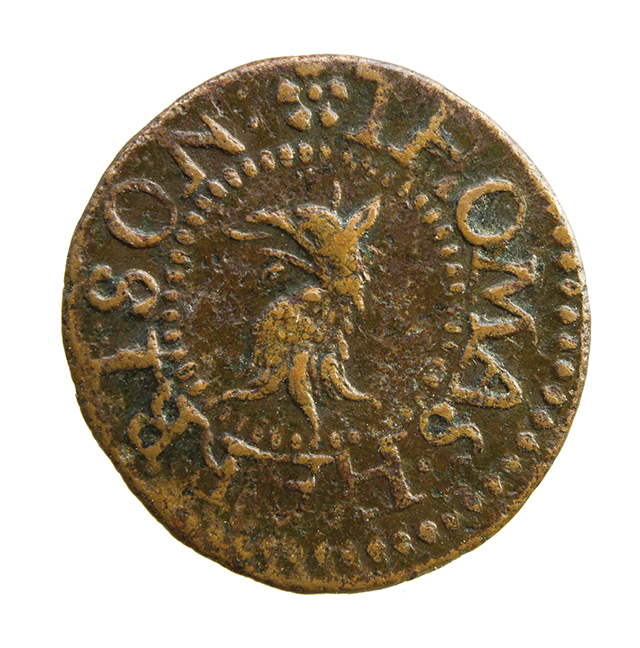 Traders’ Tokens A is for Alford

This month we launch a new series by Colin Smale which traces the history of 17th-century currency in Lincolnshire.
They were mostly made of copper but some were made of brass. If the trader fancied having a heart-shaped token, or a diamond shaped one, these could be custom made…

If you could have a coin struck for your business, what design would you have? A quiet, humble man such as John Browne of Boston (more of him in the next issue) might have a simple name, date and location but an extrovert such as Richard Barber of Gainsborough went the ‘full nine yards’ standing astride some kind of dragon with a bow in one hand and an arrow in the other and wearing some kind of suit of armour. Each one of these little coins is a unique snapshot of the person.

The small market town of Alford has only one known token, that of Thomas Harrison. In 1669 Harrison was governor of Alford free grammar school and churchwarden.

Thomas’ trade token depicts a wild looking griffin on one side and ‘Mercer • In • Alford’ on the other, with his initials ‘TH’ in the centre. So why did our Thomas decide on a griffin as the centrepiece of his coin? What was he trying to tell us about himself? The legendary griffin with body, tail and back legs of a lion, head and wings of an eagle shares its name with a type of hunting dog (Griffon), still used today. So, did our erstwhile governor of Alford free grammar school like to hunt? Well, when casting an eye over the other 200-plus tokens it seems clear that their chosen pastime or ‘warrior dreams’ were normally the chosen centrepiece for the coin.

There were other Alford traders but their tokens are not known. (Unless you have one in your button tin.)