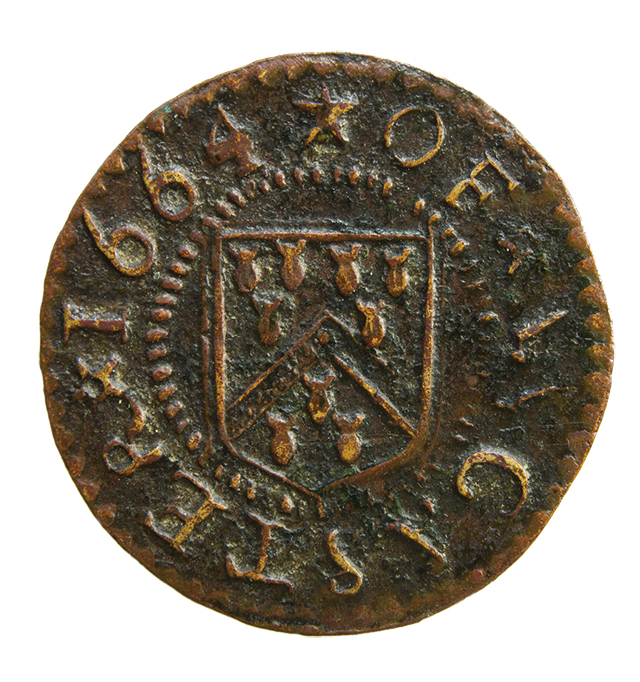 Traders’ Tokens A is for Ancaster

This series by Colin Smale traces the history of 17th-century currency in Lincolnshire.
It appears from records that the first market in Ancaster began way back in 1203 and there is still a flourishing market there every Wednesday between June and October.

Once the Romans had settled in with their unrivalled ability for road building, Ancaster was always going to benefit trade-wise because it sat alongside the now famous Ermine Street, main arterial highway for the Romans from London to South Ferriby, over the Humber to Brough and on to York.

So, looking back about 350 years when traders struck their own coins, Ancaster had struck only two; one was from John Drake and the other John Schochey.

Very little is known of John Drake except he was the son of Joseph Drake, baptised on the 14th September 1630 at Grantham and sadly, the only known coin of his, a farthing, is so badly corroded that we cannot glean any clues as to his occupation.

The trader’s token of John Schochey, however, is a very fine farthing with plenty of detail. As you can see, on one side is a fleur-de-lis with his name around the outside. On the other side of the coin you can see ‘OF ANCASTER 1664’, with a shield of the grocers’ arms in the centre.

So, our John was a grocer (mercer). You see how interesting these rare coins are. We can glean all kinds of information from them, unlike a normal farthing or shilling, etc, which tell us nothing about the folk of the time. John was nominated to be a member of Parliament in 1656.

He married a Patience and they had two daughters but only one name can be found, that of Katherine Shochee who was baptised on 30th July 1661 at Ancaster.

ANCASTER
Ancaster, so named after the Danelaw charter in 1196 where it was named ‘Anecastre’ which means ‘The Roman fort of Anna’. That Roman fort, built over an existing settlement site of our very own local Celtic tribe of the Corieltauvi grew and developed over the centuries into the market town we know today.