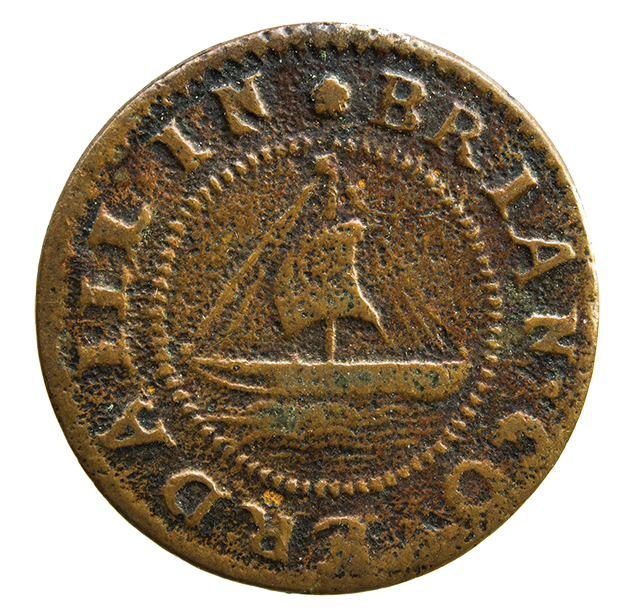 Traders’ Tokens B is for Barrow & Barton

In the 17th century, Barton had five tokens associated with it, while Barrow had just one.

The two villages are only 2.5 miles apart. In 1086 when the Domesday book was penned they were already thriving communities having a ferry across the Humber, a couple of mills and a market, so there was quite a lot of trading here already.

Brian Coverdaill of Barrow had a very interesting and nostalgic looking token issued to him in the form of a sailing ship. Some think he might have been a fisherman but this looks like a craft that carried freight and passengers, possibly sailing out of Barrow to Barton and no doubt across to Hull. The first ferry from Barton to Hull began in 1315 and this opened up trade links between London and York. Brian Coverdaill’s sailing ship was perfectly placed to take advantage of all this trade.

Brian was a ‘yeoman’, in other words a man who was free and not a servant, and who owned and worked on his own land – or possibly in this case, his own shipping business. His wife’s name was Joan and they had three sons – Lazarus, Josiah and Brian. Brian Coverdaill (the father) died in 1679 and a copy of his will survives (LCC/1679/635 and inventory ref. I 180(2)/588).

Barton Upon Humber seems to have always been an exceptionally busy trading port, shrewdly situated as it is at the top of the main arterial Roman road from the south of England via Horncastle to Barton/South Ferriby. Aside from what the local shops could supply, there would have been fishermen (fish) and drovers (fresh meat).

Traders heading north into Yorkshire needed to cross the Humber but of course time and tide controlled this movement and so if you were canny enough to own an inn there you had a very good steady income. George Kidson was an innkeeper at Barton on Humber. He had three tokens struck, a halfpenny and two types of farthing.

All his tokens depict a swan in various guises and the lettering around the edge seems to be saying ‘George Kidson at the swan in Barton’. So, it’s safe to assume that our George was able to take advantage of all that passing trade at his Swan Inn.

George married Elizabeth and they had five children.

An inscription on one of the bells in St Mary’s church Barton reads ‘George Kidson. Thomas Feraris. Wardens. 1666’.

There are three more traders’ tokens associated with Barton: those of Richard Woore, a grocer, Hugh Long and George Brown. I only have a photograph of Richard Woore’s, a halfpenny. Within the beaded circle there is the shield of the grocer’s arms which identifies his trade. Richard married Suzanna Wilkinson on 14th June 1666 and they had two children. Richard died on 8th October 1704. His inventory survives: see ref INV/198/68.