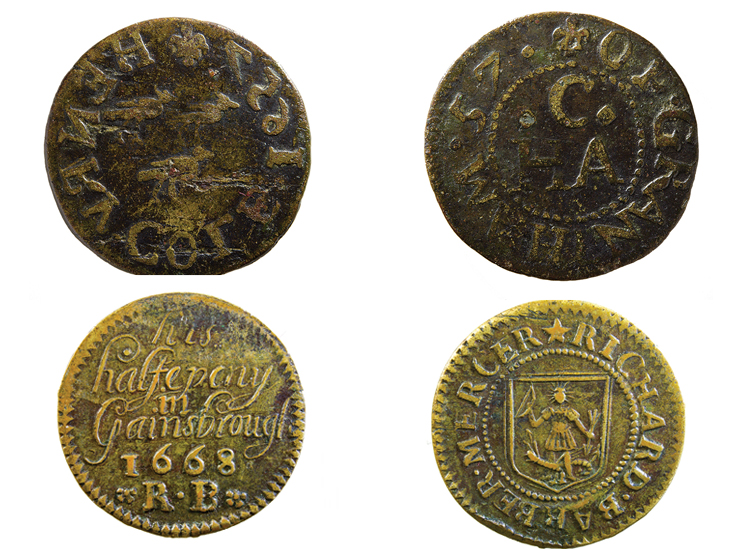 Colin Smale continues to trace the history of 17th century traders’ tokens in Lincolnshire. Compared to everyday coinage, traders’ tokens are quite rare, as they were only in circulation from 1656 to 1672.
As you will be aware by now, a tradesman could put whatever they wanted on their tokens. I mentioned in an earlier article that some were simple legends, such as we saw with Elizabeth Colls’ token in the March issue, where she merely had her initials on one side and the date on the other. Thomas Harrison (August 2019 issue) however chose a fearsome looking griffin on his coin and it seems he did that because he could!

This month we look at Richard Barber’s halfpenny, the only coin he had struck. What a busy image we see on the legend of this particular coin. He looks like a ‘macho man’ complete with bow, arrow and riding some kind of fearsome mythical creature. Was he hallucinating or having dreams of being some kind of a warrior? That’s what I thought when I first saw this one.

Our Richard was in fact a medicine man, an apothecary, and this is one of the many styles of the apothecaries’ coat of arms. The ‘warrior’ in this scene is actually Apollo, the god of healing, and he is overpowering the dragon of disease represented here by this wyvern. Pity, I rather liked the warrior idea.

But there is an element of history mystery here because this token has the word ‘mercer’ after his name (someone who traded in cloth and dry commodities), but then we see the symbol of an apothecary in the centre of the coin, so what is going on here?

Well, this is one of those times when we have to make an educated guess. He might well have had a shop that sold linen and dry goods – but perhaps was also the place to go for medicines. Maybe he was the pharmacist and his wife, Mary, dealt with the non-medical trade?

Richard and Mary were married in Gainsborough in 1669, this coin was struck in 1668, and so maybe she saw in him a successful businessman and thought, “He’s for me”!

The record states Richard Barber, mercer, was buried in Gainsborough on 29th July 1673. Longevity seems to have been rare in those days.

Moving over to Grantham, I have chosen the token of Henry Cole, chandler. Henry had this one token struck for him, a farthing depicting three doves (according to the records these are doves). Henry married one Anne Kenyon on 27th August 1640.

So why doves? We are not told, but these doves may well be pigeons. Some men have always liked a gamble and pigeon racing is reputed to have begun as far back as 220 AD. Just saying!

Henry was buried on 23rd June 1684, aged 65, so one of the lucky ones regarding longevity in those days.

Under the letter G, tokens were also struck for Grimsby and Glentham.