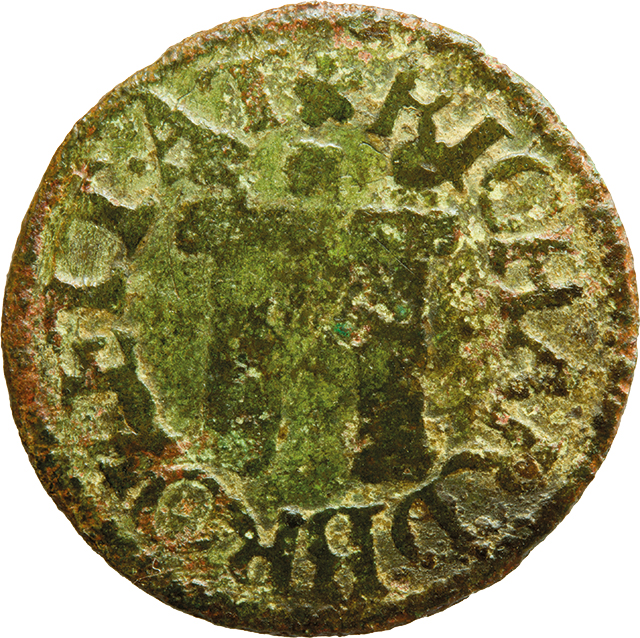 This series by Colin Smale traces the history of 17th-century currency in Lincolnshire. This month the focus is on Bolingbroke and Boston.
BOLINGBROKE
In the Domesday Book the old Saxon village of Bolingbroke was called ‘Bolingborg’. Bolingbroke may have been a misreading of ‘Bolingborg’ meaning ‘Bolla’s Hill’. Bolla was a local Celtic tribal leader. So, be it Bolinghill or Bolingbroke, this is where the Norman castle was built in 1096 and in 1367 where no less a person than Henry IV was born. The irregular pulsations of history brought the castle to its demise in 1643 at the siege of the Battle of Winceby.

Bolingbroke had only two traders who struck tokens. I wish to describe the more interesting among them. Do you know what Bolingbroke castle looked like? I cannot find even a rough sketch but these traders’ tokens, little snapshots of the day, do give us a glimpse of what it looked like as seen on Richard Brokett’s farthing.

Brokett had three tokens struck in his name, they were all farthings but Richard must have admired the local castle as he had an image of it recorded on his token which gives us a unique ‘sketch’ of what it looked like, contrasting with the sad remains we see today.

His coin (castle side) reads from top right ‘RICHARD BROKETT•AT’ and on the other side, ‘BVLLINGBROOKCASTLE’.

Richard (a mercer/grocer) and Elizabeth, his wife, reveal the precarious balance between life and death in those times. Although they were blessed with children, few of them survived infancy.

Mary, their first daughter, was baptised on 21st October 1670 and buried exactly one month later on 21st November.

Almost nothing is known about John Garthwaite of Bolingbroke who leaves only a shadow on Lincolnshire history. He was a grocer and was buried on 22nd January 1673 at Bolingbroke and had two tokens struck which were farthings.

BOSTON
Now we come to Boston, a much larger town with 29 tokens (up to now). There is only space to include one Boston trader this month, John Brassey. John married a Mary, they had two sons, William and Daniel. William appears to have survived infancy but Daniel only survived ten months.

John Brassey decided to break with tradition and go for an octagonal coin, just because you could!

He was a goldsmith and this is probably why his token was made not of the traditional copper but of brass, presumably to reflect his glittering trade (brass does shine up well, as we know).

He also decided to have the lettering on the coin look handwritten and so, yes, John was clearly an individual and he wanted to reflect this in the design of his own personal token. His token reads: ‘JOHN BRASSEY OF BOSTON HIS HALFE PENY’. On the reverse is a shield with a goose in the top left-hand corner and a ribbon of what looks like water across
the middle. Plenty of wild geese in the Boston area in those days, perhaps he was partial to a bit of wildfowling?