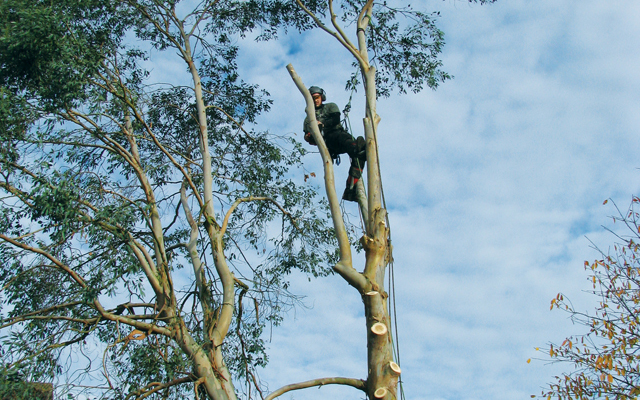 When Jean and Ken Rush found someone to cut down their eucalyptus tree, they were amazed to discover how works of art can be fashioned from a tree trunk.
Darren Rush (no relation) was born and bred in Boston, and works as a tree surgeon all over Lincolnshire. “I didn’t have a clue what I wanted to do when I left school,” Darren told me, “and I took a job where I was inside all the time, which drove me nuts. I went to the Job Centre one day and saw a vacancy for a tree surgeon. I didn’t have a clue what it was about, but I took the job and started as a groundsman, learning the skills and literally working my way up. The highest I’ve ever been up a tree is around 120 feet.”

He spent two years in Australia (where incidentally they have fire lookouts for trees) and travelled all over the country on a working holiday, including Darwin where he enjoyed climbing up the coconut trees. By comparison our eucalyptus, at forty-five feet, was only a ‘tiddler’, although it overshadowed the next door garden and had to go. When we bought the house in 1991, the eucalyptus was brought home from the garden centre in the car in a small pot; we had no idea how fast it would grow!

Talking to Darren, we were intrigued by his interest in making beautiful sculptures from the byproducts of his work. How did this come about?

He said: “Most tree surgeons have a go at it. You have a chainsaw and a bit of spare time and a bit of wood. Everyone carves. The first thing is a mushroom, as a starting point. You do a few of those, and then as you progress you get better and better. I like to do big sculptures such as eagles.

“The size of the sculpture is of course dependent on how large a piece of wood you can use. With the help of two or three men I can probably lift a six-foot piece, which would be about 1.5 to two feet across. It can take anything from a couple of days, depending how far one goes with a carving. It’s a neverending story.

“Hardwood is good for carving, but personally I prefer pine. It has a nice grain, it’s easy, it’s soft when it’s wet. The first stage is blocking it out; I take the chainsaw and block the piece of wood down to the actual figure. The second stage is using a chainsaw carving bar, which is much smaller, for more detail. After the carving comes the sanding, and the next stage is the finish, where it’s all varnished, which picks the grain out, and sealed. This brings up a high gloss, then the piece can be kept indoors or stood outside, and after a couple of years it might need another coat of varnish.

“There are two or three different grades in chainsaw carving. A basic carving will stand in someone’s garden and nobody will touch it. It’s not been sanded or anything. The next grade will involve burning; this blackens it, for instance to define the feathers and wings on the eagles I burn it with a gas burner.”

People often ask Darren to create a sculpture on the site where a tree stands: “If somebody has a 200 to 300-year-old tree and want to remember it, I can turn it into a work of art. The tree is sealed and I cut so deep with my carving that it shouldn’t grow back. My trouble is I struggle to make time for this work as there is always so much tree surgery needed all over the county,” he said.

Darren does find time to give demonstrations at a number of craft fairs. For over ten years he has been going to Revesby Country Fair, and he also attends the Newark and Notts County Show.

He said: “At Revesby we are asked to go into the main ring in front of the crowd, and we have a speed carving competition where three or four of us are carving. We each have a block of wood which is not touched, it’s just a cut off piece of wood. We have a twenty-minute speed carving competition, starting from scratch. Then the crowd judge who has done the best carving, and we auction it and give the proceeds to charity.

“We have also had a speed carving competition in our own display area two or three times. It brings the crowd in and the carvings are auctioned for charity. We raise money for various good causes, but the most frequent is the Air Ambulance. That’s a good idea, as in our job we may need it one day!”

Darren has been a tree surgeon for twenty years, since he was seventeen, and has had his own business, Greenscape Treesafe, for about ten years, employing four people including himself working in two gangs of two. His equipment includes a cherrypicker (a rather scary looking aerial platform) and we wondered whether anyone ever developed a fear of heights. “A few years ago I knew a guy who got a few yards off the ground on a cherrypicker and started turning green and had to go down,” said Darren.

Not for the faint hearted, then. But with such a beautiful end product tree surgery can surely be regarded as an art.