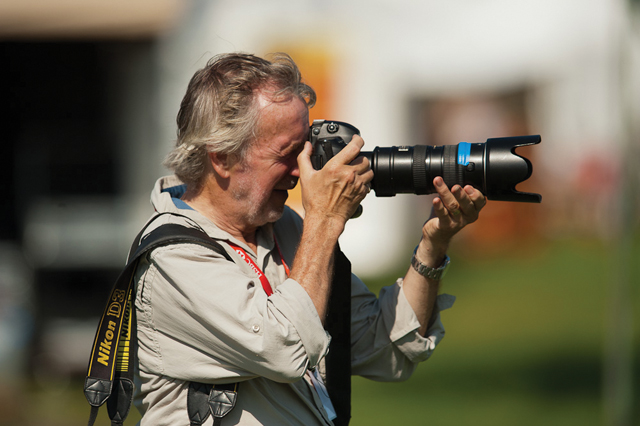 Osbournby-based Trevor Meeks, head photography steward at the Land Rover Burghley Horse Trials, has worked in the photojournalism industry for over 50 years.
With a career that has gone through more than one metamorphosis, Trevor’s experience behind the lens is something that most budding photographers can only dream of – and he’s not hanging up his camera any time soon.

Growing up in West Ham in the 1960s and leaving school with few qualifications but a thirst for photography, Trevor first cut his teeth at the Press Association’s (PA) new photographic desk as a messenger boy, hand-delivering photographs to every national paper in Fleet Street. From this position he worked his way up the career ladder to the PA’s darkroom, processing and printing the day’s most newsworthy black and white photographs ready for delivery.

One of Trevor’s more memorable darkroom experiences was his first visit to Burghley Horse Trials in the early 1970s. As part of the PA team, developing and distributing photographs on site, Trevor spent most of the three-day competition inside a mobile darkroom erected for the event. He did, however, have a chance to flex his photographic skills and captured an image of HRH Princess Anne competing in his lunch break – Trevor’s first eventing photograph. Little did Trevor know that it would be twenty years until his next one!

After a few years at PA, Trevor wasn’t satisfied with just developing photographs and decided to take matters into his own hands.

He explained: “Due to the strength of the unions at that time, it was very hard to cross over from being a developer to a photographer. There was simply not the option to be promoted, although it was an obvious next step in the career path. So I decided to start doing photography as a hobby in my spare time – but I knew I had to find a niche subject to get published.”

Trevor’s niche turned out to be motorcycle photography. His skill behind the camera proved beyond all doubt his right to be a professional photographer, leading to the next twenty years being successfully spent travelling the country capturing road racing, scrambling and speedway as a freelancer.

The equestrian chapter of Trevor’s career – which has seen him photograph Burghley every year for the last quarter of a century – didn’t begin until his early forties, when itchy feet led Trevor five minutes down the road from his Cuffley home to the Enfield Chace Point-to-Point. His collection of photographs were so strong that Barnet Press snapped them up:

“I had a great set of pictures from the day – of the dogs, the horses, spectators – together I felt they captured the event’s atmosphere,” said Trevor. “I didn’t want these photos to go to waste, so I went into my local newsagent and just looked for other publications that could be interested. I spotted Horse & Hound and the rest, as they say, is history.”

Trevor took his images to the Horse & Hound picture editor who, after some gentle persuasion, employed Trevor to capture the Horse of the Year Show.

“I knew I had to stand out from the crowd of other equestrian photographers at HOYS if I wanted to be employed by Horse & Hound again, so I just looked at where all the other photographers were standing and went in the total opposite direction. From my motorsport experience this meant I could offer different pictures from all the others – even though my equestrian knowledge was still pretty basic.

“One of the best things about photography is that you are your own boss – although this does come with added pressure. At the end of the day it’s down to you, and you alone, to get that shot that publications will snap up. You either make it work or you don’t – and you can’t blame anyone else!”

Trevor’s judgment to go against the norm led to a contract with Horse & Hound for over twenty-five years which included covering six Olympic Games and World Equestrian Games (WEG) respectively, and an annual appointment at the Land Rover Burghley Horse Trials as a press photographer.

Nowadays Trevor, who moved with his wife Brenda from Cottesmore, Rutland to Osbournby ten years ago, can be found working alongside well-known equestrian photographers such as Kit Houghton representing the top events in the country and providing images for international, national and regional media.

With Kit posted at WEG in Normandy, France, over the Land Rover Burghley weekend this year, Trevor stepped up to role of head photography steward for the first time.

“I’ve always enjoyed Burghley Horse Trials.” said Trevor. “It’s pretty relaxed compared to other events and always has a really good buzz about it with the crowds and beautiful grounds. I’ve been fortunate to work with two great event directors over the last twenty-five years – Bill Henson and Liz Inman – both of whom bring a sense of calm assurance and don’t mind getting stuck in! This reflects on the atmosphere of the event as a whole.

“The biggest challenge at Burghley from a head photography steward perspective is making sure that the photographers behave themselves – and on the whole they do. They respect the competition in general and know the ropes on how to keep both themselves and the competing horses and riders safe. There’s always the odd rogue photographer that ends up where they shouldn’t – but they soon get told to move!

“From a photographer’s perspective at Burghley, the major challenge that we face is making sure that the horses are shown at their best. Although it sounds so simple, the hazards on the course are there specifically to test the horses so they don’t always jump correctly over the fences. If the horse jumps in an odd way, the photo looks odd and doesn’t make the horse look good. We have to be ready at any moment to capture that perfect shot.

“You also have to occasionally remove any emotional connection that you might have with the sport. For example, watching a horse fall in competition is a shocking moment for anyone, but it is a photographer’s job to record that on camera, no matter what you’re feeling. You will not be doing your job if you haven’t photographed the fall sequence – it is then the newspaper editor’s responsibility to decide whether any pictures are published or not. As long as you are not intrusive, it has to be captured – it’s the nature of the job.”

So what keeps Trevor going after fifty years in the tough world of photojournalism? Apparently it’s all down to diversity: “There are so many different competitions and events within the equestrian world” said Trevor. “One week I can be at Royal Ascot, then at the polo on Sunday, before heading out to the Lincoln County Show the following week. In between that I can be doing some feature photography with a rider in their yard – it’s never the same job day in day out.

“This diversity also has to relate to me as a professional photographer too. Just about anyone can take pictures nowadays with good, quality cameras so my advice to any new budding photographer is to find your own niche in the market. Try and do something different from all the other photographers – be creative and don’t go along with the crowd. Oh, and don’t expect to earn a lot of money!”