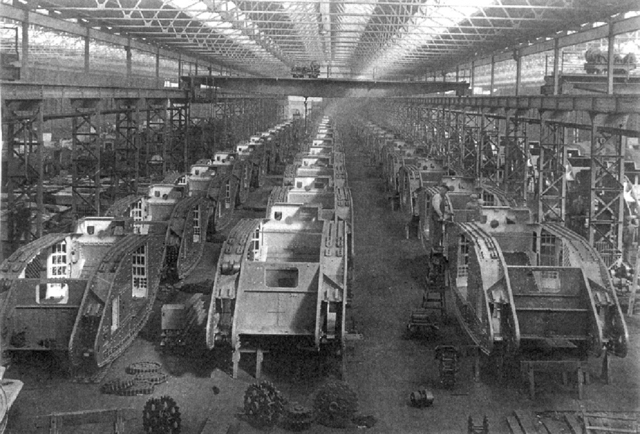 Tribute to the tank

If all goes according to plan there should be a new landmark in Lincoln next year, a memorial to the city’s engineering heritage sited on the Tritton Road roundabout.
The traffic island is located close to the site of the old William Foster and Co works which was the birthplace of the world’s first military tank. The Lincoln Tank Memorial will be a 2D scale model of the Mark I tank which rolled off the production line on Firth Road in mid-1916. Thirty-two of the machines were engaged on the battlefield for the first time on 15th September of that year at the Battle of the Somme.

The tank (its name, an abbreviation of ‘water tank’, production line workers adopted from the purposely misleading description of prototypes as ‘water carriers for Mesopotania’) was a desperately sought answer to the entrenched warfare of World War One. Commissioned by Winston Churchill, then First Lord of the Admiralty and head of the Admiralty Landships Committee, the tank was designed to overcome the dominance of machine gun fire, the moonscape terrain, mud and maze of open trenches. The Mark I tank still needed infantry support and was far from the more agile, manoeuvrable and heavily armoured models built by World War Two but its debut in the theatre of war undoubtedly broke the stalemate of the Anglo-German conflict, brought the war to a swifter end and ceased the terrible loss of life.

The design of the Mark I was a collaboration between what had historically been an agricultural machinery company, William Foster and Co – led by its tenacious and experienced managing director Sir William Tritton – Walter Wilson, a freelance engineer who had been developing armoured cars, and William Rigby, Foster’s gifted draughtsman who produced fast and accurate plans for the machine. The tank made in 1916 harnessed all their years of experience and engineering knowledge garnered from earlier attempted models such as the Tritton Trench Crosser, The Number 1 Lincoln Machine and its immediate forerunner, ‘Little Willie’.

Tritton, Rigby and Wilson’s contribution will be acknowledged, along with that of the local, male and female, production line workers, by silhouetted figures of the era alongside the tank.

An original World War I Mark IV tank can still be seen at the Museum of Lincolnshire Life on Burton Road, Lincoln and the idea for a memorial to one of the city’s greatest engineering achievements has been around for several years, but the impending centenary of the start of WWI has proved the spur to have it in place during 2014.

Joe Cooke (chairman) and his wife, Julie (secretary) along with other members of the Lincolnshire Tank Memorial Committee have been commissioning designs, fund raising, applying for planning permission and enlisting local support.

“Mike Credland produced the original design for the memorial,” explained Joe, “which will be made from a weathering material called Corten steel. This should age to an attractive patina which is easy to maintain. The surrounding figures will be painted black in contrast with the whole design standing on a stone base.”

There has been plenty of support from local councillors but specialist planning support has been given by Globe Consultants of Lincoln. Estimates expect the project to cost £30,000 and although there have been enough donations to commence the project the committee would be delighted to hear from other local engineering, construction, landscaping or fabrication firms who might be able to help.

The appeal has also uncovered stories from families whose relatives worked at William Foster and Co and the appeals website features some of their stories. Pennells Garden Centre and Nurseries have already pledged their support, as Sir William Tritton was the great uncle of the current owner. Other supporters are Lindum Group, Running Imp, James Dawson’s, the Showman’s Guild, the City of Lincoln Shrievality amongst other organisations and private individuals who have donated. A large donation has recently been made by international gaming company World of Tanks.

“We have this pedigree of engineering in our city, which may not be as abundant as during and just after the WWII,” continued Joe, “but many companies owe their skills and expertise to this heritage and engineering is giving us a bright future too. I hope that the memorial will be a tribute to that industry.”

The Lincoln Tank Memorial Committee website can be found at www.lincolntankmemorial.co.uk

THE BEECHEY BOYS
Many Lincolnshire families suffered the loss of husbands, sons, brothers and fathers during the 1914-1918 war but for one county mother it meant the loss of five of her eight sons.

Amy Beechey was the widow of Reverend Prince William Thomas Beechey, who had been Rector of Friesthorpe with Snarford until his death from cancer, after which the family moved to Lincoln.

Amy had fourteen children but by 1918 only three of her sons had survived the conflict. Presented to King George V in 1918, she was honoured for her great sacrifice but Amy is said to have responded to Queen Mary: “It was no sacrifice, Ma’am. I did not give them willingly.”

Amy Beechey died in 1936 and is buried in Lincoln’s Newport Cemetery. More information about the Beechey Boys can be found at: www.thelincolnshireregiment.org