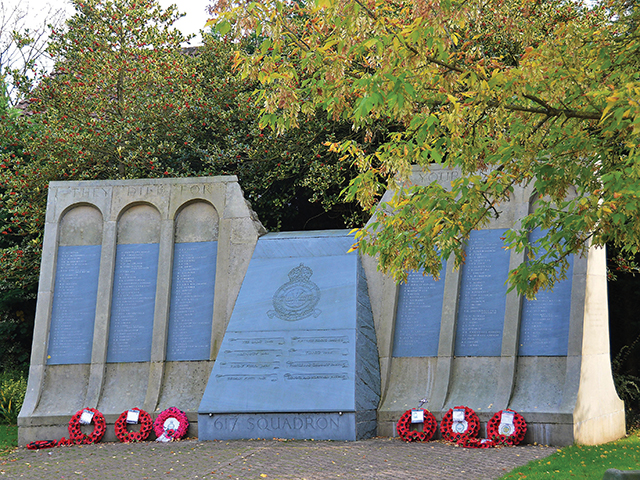 In spite of the restrictions put in place to ensure the safety of residents in Woodhall Spa, volunteers and businesses are continuing to make a positive impact.

Popular 1940s vocalist ‘Miss Sarah-Jane’ entertained locals and care home residents on VE Day when she walked the streets of Woodhall Spa with a PA system singing a selection of vintage classics.

“VE weekend was set to be the busiest period of my singing career, but with all my performances cancelled, I decided that I needed to do something,” explains Sarah-Jane, who has been a professional singer since 2011.

“I had the equipment, the know-how and the time and knew that the residents and the staff in the local care homes needed a boost of morale. After contacting the care homes previously, I decided I would walk a route that meant I could give a performance to each care home without breaching any rules and I was hoping that the village would also support me along the route, which they did. Not only was I met by the smiling faces of the care home residents and staff through the windows, but also by the local community singing and dancing from nearby properties.

“The buzz and the positivity around Woodhall that day was infectious, old and young were brought together and it’s a memory that will remain with me forever.”

Sarah-Jane, who wore her reproduction Women’s Auxiliary Air Force uniform, which was specially made for her by tailors at RAF Cranwell, began her morning performance at Heatherlea House, singing the theme tune from Dad’s Army, before arriving at Westerley care home where she sang ‘Wish Me Luck As You Wave Me Goodbye’, marching down the Broadway to ‘Sing As We Go’, arriving at Russell Green singing ‘It’s A Long Way To Tipperary’, departing Eastwood Lodge to ‘We’ll Meet Again’ and giving a performance of ‘Land Of Hope And Glory’ all the way down Tor-O-Moor Road.

“The music and big band sound makes me smile every time,” says Sarah-Jane. “The lyrics held such meaning of hope and joy and the listeners held on to every word to help get them through the troubling times. I have a repertoire of more than 100 songs, however remembering the lyrics is easy when they’re such a joy to perform.”

Sarah-Jane has recorded two CDs, Blue Skies and Stardust, which are available to purchase. She also offers a 15-minute personalised performance in the form of a Sing-O-Gram, perfect as a birthday gift or keep well message. The performance is videoed and includes a private link to where it can be viewed. For more information visit www.the1940svocalist.co.uk

JUBILEE PARK THINKS POSITIVE
Since March, when Jubilee Park announced the closure of its facilities due to lockdown, the park has been helping to boost morale by posting a series of positive messages on a board displayed in the bandstand.

The selection of feelgood quotes such as ‘Difficult journeys often lead to beautiful destinations’ were inspired by park manager Joe Stanhope, who wanted to give people something to smile about in these difficult times.

“The feedback has been universally positive and we’re delighted to have been able to lift people’s spirits as they walk through the park on their daily exercise,” explains Amarylis Midgley. “There has been a steady trickle of visitors each day, mostly using the park as part of their exercise regime. Although we would have loved more people to see our lovely park come back to life after the winter, we appreciate the way it has been used responsibly.”

The park which features a children’s playground and popular caravan/camping site, both temporarily closed, had also only recently opened a state-of-the-art gym. Several improvements and upgrades to facilities have also been made, including a complete refurbishment of the changing rooms, showers, toilets and reception area, as well as colourful outside lido-style cubicles for users of the heated outdoor pool – the biggest investment in the buildings for more than 40 years.

“We are looking forward to welcoming everyone back to share our amazing new facilities,” says Amarylis. “Regarding future events, we can’t say what will be going ahead from our original planned programme as we don’t yet know what government guidelines will be. However, we hope that some of our later schedule, such as the Last Night of the Proms in September and some of the open-air films, may still take place.

“We are also looking at ideas for new events – again subject to government guidelines – so that our many visitors and the local community will have something extra to look forward to when all this is over.”

VOLUNTEERS TEAM UP TO HELP COMMUNITY
Within just days of the coronavirus lockdown, organisers of the Woodhall Spa & Kirkby on Bain Coronavirus Community Support were quick to respond with many local volunteers offering help.

“A socially distanced meeting was held at the Woodhall Spa Football Club the weekend before the lockdown to decide what we could do to help,” explains Debbie Bollard, who chairs the group.

“We discussed what we wanted to achieve, including how to get the word out about our support service to as many residents as possible. Our primary aim was to help those who were isolated and vulnerable by providing a shopping and prescription collection service, which we needed to get up and running as quickly as possible.

“From that meeting a committee organically grew; we are a mixed bunch working on behalf of the Parish Council under the stewardship of Councillor Craig Leyland. Among us are a football coach, a respiratory physiologist at the Pilgrim Hospital, a pilot on maternity leave, a white van man, a care assistant, a student, a social worker and me running my own consultancy business from home.

“The week after that first meeting we arranged for around 35 volunteers to deliver more than 3,000 leaflets to homes in and around Woodhall and Kirkby on Bain, with the assistance of plenty of hand sanitiser and wooden spoons to help avoid touching the letter boxes where possible.”

“Once the shopping and prescription service was up and running, we introduced a Phone A Friend service, set up a food bank and started looking for donations for a hardship fund,” says Debbie. “We had a second batch of leaflets printed which were again delivered to everyone in the vicinity, as well as putting banners up in both villages.”

The group is currently supporting approximately 100 households and the majority of their work is shopping for those who are unable to order online and collecting prescriptions from the chemist and local surgeries.

“To date we have delivered nearly 200 shops and approximately 400 prescriptions. The uptake on food parcels has been limited, but I think that there may be harder times to come yet for some families.”
Debbie says she hopes to continue offering the services of the food bank once the coronavirus crisis has passed.

“Previously our financially vulnerable residents were having to use the Horncastle food bank; I heard one story at the start of the lockdown that a local family had not eaten properly for three days, which really shocked me.”

The group has received donations of food both in person and through the collection point at the Co-op in Woodhall Spa.

“The Co-op has given our shoppers cards identifying them as shopping for others so that they could buy restricted items when items such as toilet rolls were in short supply and the staff also let us know if they think there is anyone who might need our help,” explains Debbie. “We have also developed good relationships with the staff in Boots Chemist and the local GP surgeries so that we are able to quickly pick up orders and get them out to the residents.”

They have also received a number of cash donations to the hardship fund, including £1,500 from the 1940s Festival, £500 from Woodhall Spa Rotary, £300 from Inner Wheel and several hundred pounds in private donations. They are also expecting a grant of £500 from Lincolnshire County Council through Councillor Tricia Bradwell.

“We have had an amazing amount of support from the Woodhall Spa community,” says Debbie. “I think it speaks volumes about where we live and the community spirit there is in the village.”