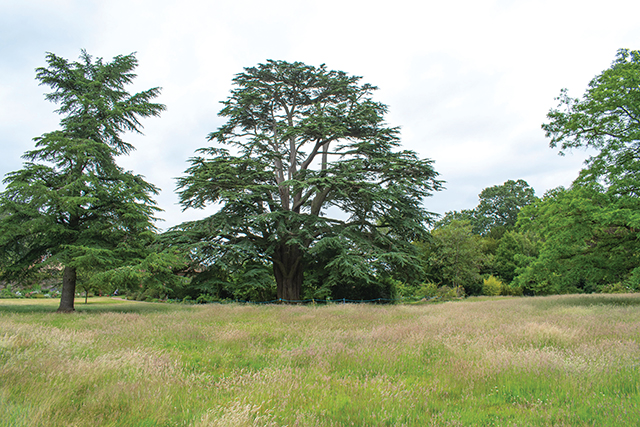 Celebrating the majestic cedar of Lebanon at Gunby Hall.

A narrow gravel drive flanked by lime trees arcs through parkland and up to the big house. It is a bucolic setting only added to by the herd of Lincoln Red grazing peacefully nearby.

Gunby Hall, just east of Spilsby in the Lincolnshire Wolds, is set in a gentle landscape of trees but in amongst the many wonderful arboreal specimens there is one that stands out more than most. A 200-year-old cedar of Lebanon, situated in an open grassed area behind the Hall, that is perhaps one of the best examples of its type in the country.

Gunby Hall was built in 1700, owned by the same family, the Massingberds, until the 1960s and is now managed by the National Trust. Described by Alfred Lord Tennyson as a ‘haunt of ancient peace’, archaeological finds do indeed suggest the house and garden reside on the site of settlements dating back to the Iron Age.

It is known that the great cedar was planted by Peregrine Langton-Massingberd sometime between 1810 and 1815, possibly to commemorate a friend who died at the battle of Waterloo, though this is not known for sure.

The Gunby cedar has all the classic characteristics of the species. At ground level the thick bole looks like it is formed from a cluster of smaller shafts bundled together like strands of a massive rope. As it extends up multiple stems emerge to continue parallel journeys skywards, each an impressive trunk in its own right.

By contrast to the erect dark brown central column of the tree, the side branches spread outwards at various angles in flat hand-like layers of grey green needles, topped with cones, with the larger lower branches dropping slightly to form giant parasols.

Cedrus libani are often described as majestic, grand and graceful, and it is easy to see why. The combination of shape and size (the Gunby cedar has a trunk that measures 6.57m in diameter) makes them both beautiful and awe-inspiring.

“As a veteran tree it requires a lot of attention,” says Natasha Johnson, senior gardener at Gunby. “Definitely the most expensive and high maintenance plant in the garden.”

At the time of my visit the Hall is just beginning to emerge from the coronavirus lockdown and with Natasha the only member of the garden team not furloughed, the management of the garden has had to adapt.

“One unexpected consequence of lockdown has been that wildlife has ventured further into the garden as the scent, and memory, of human visitors has faded. We have just had all the roses next to the Hall ‘pruned’ by the muntjac!” she tells me with a rueful smile.

With limited staff during the pandemic, the normal mowing regime was not possible and larger areas of grass could not be mown. Consequently the cedar now presides over a meadow of low swaying grass and wildflowers that is alive with bees and butterflies, instead of the usual striped lawn. The effect is quite magical and provides a pleasing softness in contrast to the imposing architecture of the statuesque giant.

The cedar of Lebanon is thought to have arrived in England in the 1630s and subsequently got a mention in John Evelyn’s influential discourse on trees Sylva that was published in 1662. While the oldest known specimen in the UK was planted as long ago as 1646 in Childrey, Oxfordshire, it wasn’t until the 1740s that the trend for planting these impressive living monuments took off. For the hundred years that followed they were a must-have addition to every grand estate and country house garden.

Not surprisingly this is a tree that was once found in abundance in the mountains of Lebanon and is still embedded in the culture of that region, with the cedar of Lebanon depicted on the national flag, currency and airline. It is the tree most mentioned in the Bible and has long held associations with power, purification and the divine.

Its occurrence in its natural range has, however, been much diminished. In ancient times huge forests covered areas of the Eastern Mediterranean and Asia Minor but exploitation by successive civilisations over thousands of years, from the Sumerians to the Ottomans, took their toll.

With many valuable properties – strength, ease of use, a preserving resin and pleasant aroma – it was utilised for everything from building imperial navies to keeping insects away from fabric, from furniture and veneer in grand palaces to embalming and mummification. When the burial chambers of the ancient Egyptians were opened, four thousand years after being sealed, archaeologists were greeted by its resinous aroma. It was purportedly the wood used by King Solomon to build the first temple in Jerusalem, a millennium before Christ.

In their native habitat the cedar of Lebanon can live for several thousand years, which makes the Gunby tree a mere stripling. However, this does not make it any less impressive as it has a growth rate that surpasses most of our native trees.

Reg Harris is part of the extensive team responsible for looking after the Gunby cedar, an experienced tree surgeon who has spent more time than most working on some of the country’s most cherished veteran trees, including the Major Oak in Sherwood Forest.

“It’s a wonderful tree, a huge sentinel, that has defied the odds to grow into such a fine specimen despite taking the full brunt of the weather from the North Sea,” says Reg. “I saw it shortly after it had taken a battering from the Beast from the East in 2018, but despite its age it is full of vigour and always bounces back.”

Look closely and you will notice a series of metal cables running between the trunk and side branches. Carefully balanced slings to protect giant limbs from injury, and which are inspected by arboricultural experts every five years.

“Cedar are particularly susceptible to damage because the flat lateral plates of foliage can periodically carry a lot of extra weight from rain or snow,” explains Reg. “Consequently they often have big gaps between branches, where limbs have fallen in the past. Something our work prevents.”

What isn’t known is how long these grand guardians will survive in this country as these are the first generation of Cedrus libani to be planted here. We are in uncharted territory or, as Natasha Johnson puts it, “these veteran cedars are living history.”

Back in the mountains of Lebanon reports suggest that it is no longer over exploitation but climate change that is beginning to take its toll on this iconic species, with warmer weather and new pests.

We can but hope this magnificent tree will grace the garden at Gunby Hall for many decades, if not centuries, to come.

To see the cedar of Lebanon at Gunby Hall check the website to pre-book a visit www.nationaltrust.org.uk/gunby-hall