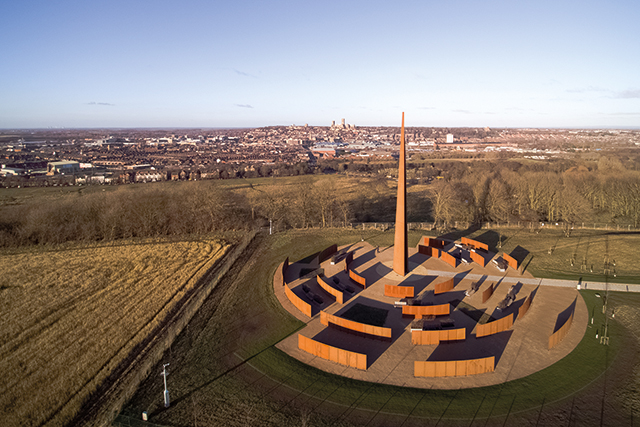 The culmination of a nine-year project to give Lincolnshire a first class memorial and digital archive commemorating World War II aircrew losses and veterans will be marked by the official opening of the International Bomber Command Centre this month.
Most fittingly the ceremony, to be held on 12th April, will see not just one ribbon snipped but veterans attending from across the UK and beyond will each cut their own ribbon.

The IBCC has already held memorable and moving occasions, from the cutting of the turf in 2013, to the completion of the Memorial Spire and Walls of Names, and the Commemoration of Operation Manna in 2015.

For this month’s ceremony, ticket applications have far exceeded the 5,000 capacity, but the public who have not been given an invitation can still buy a tickets for the outdoor Evening Concert.

Nicky Barr, chief executive of IBCC said: “One man inspired and drove this project and we will be celebrating his achievement with his family here too. Our chairman, Tony Worth CVO died in November before he could see the final completion of his vision, of telling the story of Bomber Command to future generations.”

The centre is now complete with memorable and moving exhibits, indoor and outdoor, which are a worthy tribute to those who lost their lives serving or supporting Bomber Command.

THE WALLS OF NAMES
Surrounding The Spire are memorial walls of the same steel material, panels of which are engraved with the names of 58,000 men and women who lost their lives serving or supporting Bomber Command. They are in alphabetical order, with no mention of rank, recognising the equal sacrifice each person made. They came from over 45 different countries across the globe with the youngest recorded as being only 14 years old when he died.

THE RIBBON OF REMEMBRANCE
Located in The Lincolnshire Peace Garden, The Ribbon of Remembrance connects the Chadwick Centre to the Memorial Spire, framing the Memorial Avenue. Engraved paving stones can be dedicated to commemorate a relative or friend either side of the avenue. There are already moving tributes in place but the ribbon will take time to be complete. Since the IBCC opened to the public at the end of January, there has been a wealth of visitors from the public, school groups and tours. Their trip around the exhibits is refreshed with a stop at The Hub Café, which offers tempting, locally sourced and freshly prepared light meals and sandwiches. There are ration packs for younger visitors and The Hub is licensed to sell wine and beers.

You can find out more and pre-book tickets for your visit to IBCC at: www.internationalbcc.co.uk

THE CHADWICK CENTRE
The Chadwick Centre, named after the designer of the Avro Lancaster, Roy Chadwick, has been designed to give an immersive museum experience, over three galleries, using state-of-the-art technology and interactive displays. The exhibit recognises the difficulty of telling such a complex story surrounding the targeting of civilian populations. There are accounts from survivors, members of the Resistance Movement and people whose communities were affected by the influx of service personnel.

THE SPIRE
Rising over the city skyscape at the top of Canwick Hill, the weathered steel Spire is the UK’s tallest war memorial. In sight of Lincoln Cathedral, The Spire recognises the ancient building’s significance as a sighting point for many of the crews who flew from the county; their last sight of Britain and their first assurance that they had arrived home safely.

PEACE GARDENS
With ten acres of landscaped grounds, the IBCC has two new peace gardens which will mature to offer quiet and contemplative spaces for visitors. The Lincolnshire Peace Garden includes more than 8,000 daffodil bulbs and 27 native trees marking each Bomber Command station in Lincolnshire during the war years. The International Peace Garden marks the 62 nations from five continents who served or supported Bomber Command. Planting includes international species and a Peace Grove. Both of these gardens can be explored using digital and physical interpretations, to trace histories and squadrons.

LINCOLN ORPHEUS MALE VOICE CHOIR TO PERFORM AT IBCC OPENING CEREMONY
Lincoln Orpheus Male Voice Choir will be one of six choirs joining forces to perform at the completed International Bomber Command Centre. This will be the culmination of their involvement with the memorial, which goes back several years. Some of Lincoln Orpheus’s many charitable concerts have resulted in donations to the IBCC Trust formed by the late Tony Worth CVO. Much of their interest was fostered by Life President, the late Roy McDonald, and has continued under the current chairman, Mr Sidney McFarlane MBE, chairman of Horizon Community Development Ltd and a Trustee. These have included a concert held in 2015 in Lincoln, with a visiting choir from Chapel-en-le-Frith, and a memorable concert with the Sleaford Concert Band under their director of music Jim McQuade that was appropriately entitled Aspire to the Skies. This direct link to the memorial recalls the choir’s involvement in October 2015 with the unveiling of the Spire as a memorial to the thousands of crewmen who served in Bomber Command during World War II. The Lincoln Orpheus Male Voice Choir, together with the City of Lincoln and Louth Male Voice Choirs and the Band of the Royal Air Force College, gave the first performance of the specially commissioned work by Tom Davoren, Strike Hard, Strike Sure. Based on the motto of RAF Bomber Command, the performance at the dedication of the International Bomber Command Memorial Spire, was accompanied by a flypast by Lancaster, Blenheim and Vulcan bomber aircraft. The choir were proud to be part of that moving ceremony and now look forward with equal pride to a further performance of Tom Davoren’s work at the official opening on 12th April, where they will be providing entertainment for the large crowds expected.

The Lincoln Orpheus Male Voice Choir first performed in April 1934 in the Hannah Methodist Church in Lincoln. Over the next eighty-four years the choir has raised many thousands of pounds for both local and national charities and many a church organ or roof has benefited from thier efforts. The choir has performed concerts across Lincolnshire and has in recent years shared the stage with both local bands and choirs as well as nationally known performers, singing a wide and varied repertoire including show songs, spirituals, opera, folk, secular and religious music, together with both traditional and contemporary pieces. The choir still rehearses every Tuesday evening, at St Mary’s Preparatory School, Winnowsty Lane, Lincoln. New members are always welcome. There is no need to be able to read music, a love of singing and a wish to be part of a friendly choir is all you need.

See the website www.lincolnshireorpheusmalevoicechoir.co.uk or call Stuart Worsnop 01673 862237 for a chat.