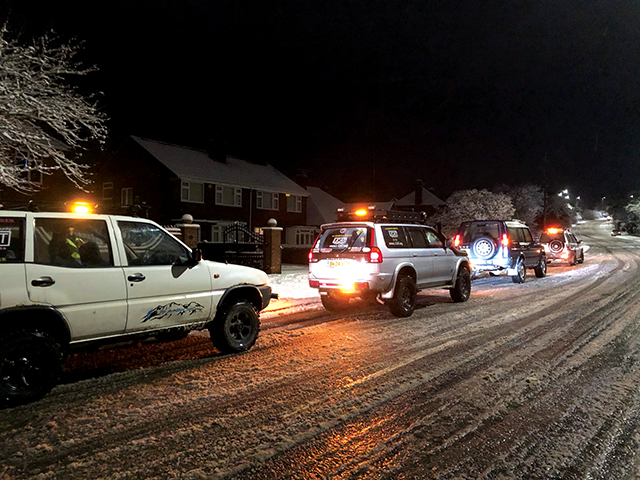 There has never been a more exciting time to join the Lincolnshire Community Assistance Team. Kate Chapman reports on the members who offer their valuable help to emergency services across the county.

The registered charity, L-CAT for short, is made up entirely of volunteers and is split into two divisions – a community assistance team and community first responders. The assistance team gets involved in all aspects of community life from taking part in search and rescue operations to delivering meals to vulnerable people, while the responders are trained and called by the East Midlands Ambulance Service (EMAS) via the 999 system and respond to medical emergencies.

The 100-strong group, which has members spread over Grimsby, Cleethorpes, Louth and Lincoln in the north to Grantham and Boston further south, was launched in September 2012.

“It all began in Grimsby when it started off on quite a small, local scale but the group has grown and expanded quite quickly,” explains Aaron Goss, a community first responder, who joined L-CAT 18 months ago.

“No two days are ever the same. Our members are being asked to help in all kinds of situations from finding missing people to helping out during floods – we’ve got a good 4×4 crew too and are able to help move people from their homes to places of safety during these difficult times.

“We have our own Community First Responders team with EMAS, so they respond to 999 calls and can be the first people on the scene. Through the Lincolnshire Resilience Forum we were called on to help out a lot during the pandemic too by delivering meals, leaflets and important information to members of the public.

“It’s a fantastic organisation to be part of, especially at the moment as there are so many exciting opportunities coming up and training programmes to be involved with, with even more in the pipeline.”

Other tasks the group has been involved in include checking on elderly and vulnerable residents during the pandemic, sandbagging during episodes of flooding as well as rescuing householders, retrieving stranded motorists during adverse weather conditions, high risk missing persons searches in a variety of locations and clearing roads in storm conditions.

The group also has a 4×4 team, although Aaron is keen to stress that ownership of one of these types of vehicle is not a necessary requirement for membership. This team is involved in tasks such as helping move essential workers and equipment during bad weather and dragging fallen trees from the county’s roads to keep the networks moving.

Aaron says the great thing about becoming an L-CAT volunteer is flexibility – it is entirely up to each individual which of the groups they want to be part of. They can either sign themselves up to both divisions or just the join the community assistance branch and then it is up to them to decide how much of their time they wish to give up.

“We’re open to pretty much anyone who wants to come and join us,” he adds.

“Obviously volunteers need to be 18 years or older, but there’s no upper age limit – we’re here for anyone who wants to come along and learn some new skills, with full training given. And, if people don’t feel comfortable doing certain things we can work around that too. We want new members to come and join us and we can be flexible to their needs.

“I became a member about 18 months ago. I was already with the St John Ambulance and someone there gave me a leaflet about L-CAT and the work it does, so I got in touch to find out more.

“I love being able to help out and give something back to my community as well as learning lots of new skills and it’s a great way to meet new people. It really is a great group to be part of.”

Once they have completed the necessary DBS checks and training, members are either issued with a radio receiver or can download an app to their phone which alerts them to incidents, and where they can also log their availability.

It’s then a case of waiting to be paged, with calls coming at any time of the day or night, while training and exercises are also carried out regularly.

As a registered charity it also falls upon L-CAT members to raise their own funds to keep the group going, a task which has been made all the harder this past 18 months as many regular fundraisers had to be cancelled.
Aaron added: “In terms of funding we are a charity – it takes a lot of fundraising to be able to keep doing this and providing the services and support that we do.
“While Covid has been ongoing we’ve not been able to hold our annual events, although we’re starting to have a few now. But that all takes a lot of time too – as well as new members we need to find new ways to keep donations coming in as this is a great thing that we are doing in the community.

“But the cost of a defibrillator alone is somewhere around £1,500, while a full kit bag for a CFR is £2,000, then there’s the training side of it. It all costs money – to put four responders on the road you’re looking at around £8,000.

“We’ve just got a new responder up in Barton, where the average response time for an ambulance is 20 minutes.

Having her there, going on shift for a couple of hours brings that time right down, and if you’re dealing with something like a cardiac arrest, every minute counts. Having that availability in that area now is amazing.

“We just need to keep getting the word out about what we’re doing, how we’re helping people and get more people to come and join us to keep the good work going.”

To find out more about L-CAT or to register your interest in becoming involved visit the group’s website www.l-cat.org