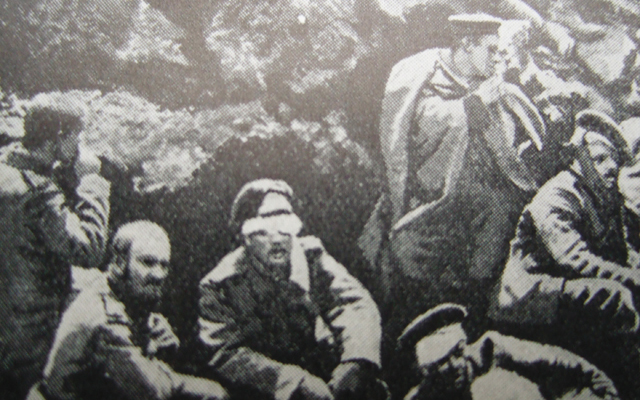 Writer and historian Keith Gregson, author of ‘A Tommy in the Family’ researches a First World War postcard with Lincolnshire connections.
Of men who came out clearly there were one-hundred-and twenty-three,
And those all looked round eagerly for their mates they could not see
There were many aching hearts I’m sure, amidst that motley throng –
For most of them had lost a friend, who’s (sic) spirit had gone along

(Extract from ‘The Charge at Loos’)

This article is based on a postcard given to me by my father many years ago when I was in charge of a history department at a large northern comprehensive school.

He used to trawl what at the time were called ‘white elephant shops’ for primary source material I could use in the classroom. As a result I ended up with a couple of books of First World War postcards similar to this. More recently I have been working on records relating to amateur rugby, cricket, tennis and hockey players from Sunderland who joined a local territorial battalion, went off to war, and were decimated at the Battle of Ypres in the late spring of 1915.

Always keen to mark centenaries, I turned my attention to the postcard which is the subject of this article. It has a very specific date on it – 13th October 1915 – and as I researched further into events behind the poem, was struck by the similarities in what happened to the Lincolnshire lads in October and the Sunderland lads a few months earlier. Both were at battalion strength (nominally 1,000 men – 1st/5 battalion Lincolnshire Regiment and 1/7 battalion Durham Light Infantry), both were new volunteers or long-standing territorials – part of the ‘New Army’ fresh to action, both were involved in gas attacks and both suffered heavy losses.

The title of the poem ‘The Charge at Loos’ gives the context of the engagement nicely. By the autumn of 1915, trench warfare was firmly underway and numerous efforts on the part of both sides to break through opposition lines had ended in failure. What has become known as the Battle of Loos was the biggest allied offensive of 1915. Loos itself is a relatively small place on contemporary maps of the battlefields. It lies just to the north of the town of Lens and was in a coalfield, which explains the distinctive buildings which often appear in pictures of the battle. The 1/5 Lincolnshire involvement (also as with the Durham lads) came at the very end of the campaign, when everything was thrown at the enemy with dire consequences.

Looking at the Lincolnshire battalion in more detail, it turns out to have been part of the 46th (North Midland) Division (Territorial Force). The territorial army of the early twentieth century was based on regional divisions – (the Sunderland lads were in the 51st North East Division) – the Lincolnshire lads were trained to fight alongside men from Leicestershire, Nottinghamshire & Derbyshire, North Staffordshire and Monmouthshire. As in all these divisions, there was support from the Royal Field Artillery and Royal Engineers – also mainly local territorials.

Most of those involved had joined up as soon as the war broke out in August 1914 if they were not in the territorials already. Since then they would have been involved in training and guarding places of local strategic importance.

The ‘Charge at Loos’ which gave the poem its title took place on the last afternoon of the battle and involved an old pit-heap known as the Hump and an area called the Hohenzollern Redoubt. The British artillery fired at the enemy positions and released poison gas but then there was a delay and by the time the charge took place, the Germans were back in position. There were only a couple of hundred yards between the trenches and the enemy held the upper ground, packed with machine guns and with wonderful views across no-man’s land. Two battalions of the Lincolnshires, including the 1st/5, were in the vanguard and were virtually wiped out. Very few of the victims have known graves and as one online site notes, ‘these were regiments whose recruits were from the same towns and villages, many brothers, fathers and sons, uncles and cousins all died together’.

The only person mentioned by name in the poem was the commanding officer Thomas Edward Sandall. He lived to tell the tale and to write the battalion’s story. He was a Northamptonshire born doctor who had settled in Alford, which was home to a volunteer military movement that preceded the territorials. As far back as 1900, Sandall was an officer in the volunteers so was long-serving as a part-time soldier by 1915. By then he was lieutenant-colonel and in his mid-forties. As the poem suggests, he was wounded in the action but was still around after the war to dedicate the war memorial at Alford.

I may also have found the author of the poem. E C Plastow is something of an unusual name and general search engines suggest that someone of that name published a book in 1918 entitled Rhymes of the Times – also that the work is ‘currently unavailable’. The genealogy web sites are more helpful, leading us to an Edwin Charles Plastow who was born in Grimsby around 1885 and in 1911 at census time was twenty-six, a master baker and living at 30 Nicholson Street in Cleethorpes. He was a journeyman baker, married with two children. Ten years earlier an Edwin Chas Plastow was sixteen and living with his parents Henry and Margaret. Edwin was an errand boy and his London born father a dock labourer. Their address was 58 Tiverton Street. In 1891 six-year-old Edwin C Plastow was at 248 Hooper Street and it was clear that the family had moved to Cleethorpes from the south just before Edwin’s birth. A number of his military records have survived and show that he served in the 1/5 Lincolnshires and, later, the Army Service Corps. He landed in France in February 1915 and received the 1914/15 star. In 1916 he was moved to the Defence Corps and in 1918 to the Army Service Corps. He received the two traditional service medals too. He seems to have died in Kent in 1935. There seems no reason to doubt that he was at, or near to, the battle himself.

In 2006 a memorial was unveiled at the site of the attack and it was dedicated to all who served and fell in the Hohenzollern Redoubt battle on the 13th October 1915.