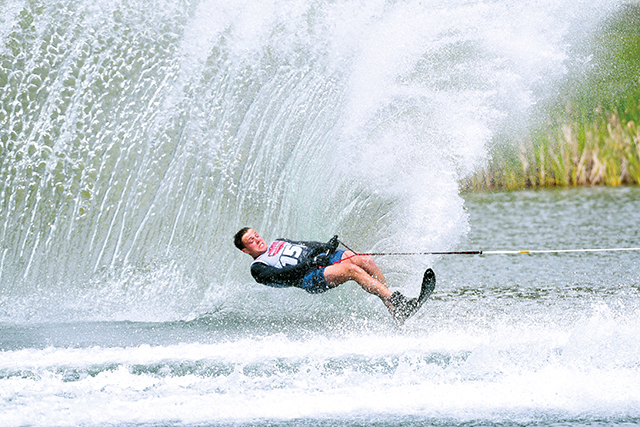 Water skiing is in his blood

He was just two years old when he took up the sport and now Robert Hazelwood has his sights firmly set on becoming a world champion, Kate Chapman reports.

The 20-year-old, who lives and trains in Lincoln, already has a raft of junior titles to his name and now, as he prepares to move up to compete in the U21 category and on the pro-circuit, he is determined to win even more.

And there’s no doubting he will do well, for his family is renowned in the water skiing world – his cousin, Will Asher is a two-time world champion, while his uncle Mike Hazelwood is a three-time world record holder and winner of four world titles.

“I’ve grown up around water skiing,” says Rob, who trains at Hazelwood Ski World during the British summer months and overseas in winter.

“It’s always been a big part of my life. Going back to the 1970s, my grandfather built a lake out of some gravel pits so my uncle had somewhere to train and the whole family loved it – I guess you could say it’s in my blood!

“I was just 2 when I first started, not long after I’d started walking and straight away I was hooked.

“I didn’t really know if I was any good until I started doing a few competitions but following an early one, when I came third overall, I remember thinking ‘I really quite like this!’

“I can’t get enough of the feeling of when you get out there on water. When you stand on it and then when you’re travelling across it, going 60 and 70mph because of your own force. You never know exactly what is going to happen next.”
Water skiing consists of three elements: slalom, where competitors ski around a series of buoys; jump, where they must jump as far as possible with distances reaching beyond 60 and 70m; and tricks, which involves performing a series of fast and furious flips and summersaults during two twenty-second passes.

All three disciplines combine to make an overall event too and Rob, who attended The Priory Academy LSST, competes in all of them but favours the slalom.

Early success spurred him on to take the sport more seriously and encouraged by his parents, George and Flo, he took part in his first British nationals when he was 9.

The same year he travelled to France for his first overseas tournament against competitors from Italy, GB, France and Portugal, while his first European Championships came a couple of years later when he was 11.

In 2017 he won a gold medal in the slalom discipline at the Junior World Championships in Santiago, Chile, when he also came home with two bronze medals after finishing third in both the overall and team events.

Since then he has regularly competed on the British, European and world stage.

This year’s season has proved quite challenging after Rob ruptured his bicep during training when his arm went through the triangular hole of his handle and was pulled.

He was forced to take three months out while he recovered but still went on to claim overall fourth place in the U21 World Waterski Championships, in Canada, in June.

“It was disappointing as before my injury I’d had really good training. I was hoping to go and win the competition, but obviously this time it just didn’t happen for me,” he says.

“It was a shame. It was a nasty injury and not a very common one.”

So, what’s next for Rob? At the time of our chat he’s preparing for his last tournament of the year at the World Beach Games, in Qatar, on 14th October.

After some winter training in Chile he’s then hoping to make it to Australia in February for his first contest of 2020.

“It’s all about putting my name out there at the moment, securing some more sponsors and letting people know who I am,” says Rob, who also coaches junior water skiers.

“I am really lucky that my parents are very supportive, as are the rest of my family and coaches as well as my sponsors, which means I’m able to do this full-time.

“I love the challenges water skiing presents, but the people I have met through the sport are amazing too.

“And this year alone I’ve been lucky enough to travel to Malaysia, Ukraine, Canada, Chile and soon Qatar. The sport has a great community.

“I’ve always competed levels up from my actual age, so I’ve still got another year left competing at under 21, but there’s no Worlds next year, only European championships.

“I’m stepping up to do a few more tournaments on the pro circuit too.”

Rob trains on lakes, rather than open water, sometimes several times a day and includes gym work in his routine in the off-season months.

“You just have to keep training on the water – the more you train on it, the more you can get a feeling for it, and how your body responds to it,” he adds.

“I’ve been around the sport all my life, I’m confident about moving up to the next level but it can still be scary.

“I did my first pro final a while ago and went head to head with this other skier who I’ve been watching for years – I nearly got him, it was a great experience.

“It’s pretty surreal though, competing against all these people that I’ve been watching on YouTube for years but I’m really looking forward to it and giving it my best shot.

“It’s an amazing sport and my aim now is hopefully to follow in my cousin and uncle’s footsteps and become a world champion.”