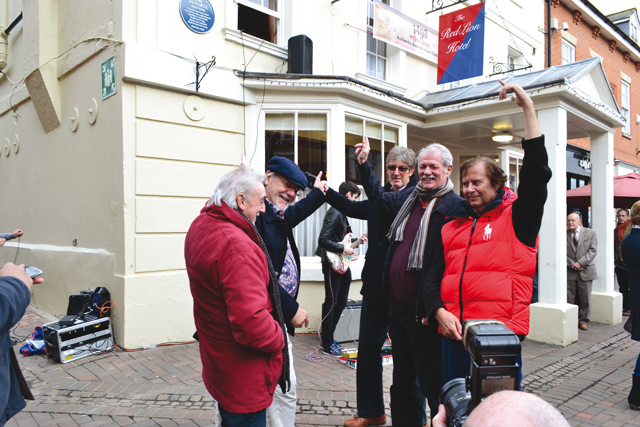 When you think of great British rock festivals what springs to mind? Glastonbury undoubtedly, or those staged annually on the Isle of Wight, and in Leeds, or Reading? I bet it’s not Spalding.
Before those hugely popular events were first staged, the little fenland market town was blazing a trail in the music world as host to the country’s first true rock festival – with headline acts including Jimi Hendrix, Cream fronted by Eric Clapton and Pink Floyd.

The Barbeque ’67 concert took place on Spring Bank Holiday Monday – May 29, 1967 – in the town’s Tulip Bulb Auction Hall and to mark the historic occasion a blue plaque has been unveiled at the Red Lion Hotel. It was here that Hendrix, famous for songs including Purple Haze and Foxy Lady, spent the night following his performance.

Hotel manager Nigel Wilkins said the guitarist hung out in the hotel bar with Eric Clapton and Ginger Baker before the gig and later that night is said to have jokingly tied his bed sheets together, hanging them out of his window to the girls in the street below, to whom he was chatting.

“We’re delighted this plaque has gone up – the concert is becoming more well known now and people are keen to hear all about it and have a look at the room where Hendrix stayed, although obviously it’s changed considerably since back then,” said Nigel.

“We’ve got a poster from the event and a photo of Hendrix up in the room – people think it’s a spoof that this big event happened in Spalding, but it was at a time before these musicians were at the peak of their fame.”

Other names to top the bill that night included Geno Washington and the Ram Jam Band, Zoot Money and his Big Roll Band, and The Move, all supported by local group Sounds Force 5.

Advertisements for the concert promised ‘non-stop dancing 4pm (in the afternoon) to 12am (at night)’, a licensed bar had also been applied for and revellers were promised ‘hot dogs, covered accommodation, ultra-violet lighting’ and ‘a knockout atmosphere’ – all for the admission price of £1, which could be paid on the door.

Around 4,000 rockers and hippies from across the country descended on Spalding for the once-in-a-lifetime opportunity to see their idols in action – with many being turned away unable to gain entry.

Sounds Force 5 drummer Colin Ward said his group was unfazed sharing the bill with such a monumental line-up, as they themselves had officially been crowned a top 60s band in one of the first ever Battle of the Bands judged by Van Morrison.

“We’d been playing all around the area for some time. At that point, the difference between major pop stars and local pop stars wasn’t like it is today because there wasn’t the huge media influence there is nowadays,” Colin explained.

“It was awe-inspiring to meet Jimi Hendrix, and we sat and chatted to him backstage. Looking back I wish I’d got a dozen more autographs – I only got a couple and gave them away!

“While we were there somebody burst into the changing rooms and grabbed a load of shirts, one of which was mine, and went off running down the car park yelling they’d got Jimi Hendrix’s shirt. Mine was a yellow, frilly one – I’m pretty sure it’s still out there somewhere, with someone thinking that it belonged to Jimi!”

Mr Ward formed Sounds Force 5 in the mid-1960s with guitarist Rob Munton. Initially called the Gate Crashers, they played gigs around Spalding and south Lincolnshire and were soon joined by Alan Turnell as lead vocalist and later bass player, Stuart ‘Len’ Doughty on the keyboard and rhythm guitar and vocalist Mick Peacey. Like all other groups of the time they played original material and covered popular tracks.

Recalling Barbeque ‘67, Colin said the whole atmosphere and his memories of the event are “wonderful”, adding that rumours of Hendrix being in a bad mood have been mixed up with another of the performers. He says the American idol did lose his temper with his equipment at one point because the sound wasn’t very good and went on to tip a load of lighter fuel over his guitar before setting it alight – after he gave a wild performance playing it with his teeth and behind his back.

“Nobody could really be bothered with it though, and his guitar’s supposed to have ended up on Spalding tip somewhere. Perhaps someone rescued it, goodness knows what it would be worth now!

“It was a great event, unique – and it’s something I find myself talking about most weeks. But looking back, history needs to be put right. This was the first true rock festival and Britain’s first festival and it happened here in Lincolnshire. It came before the Monterey Pop Festival in California, which was in the summer of 1967 and this needs publicising more.”

Sounds Force 5 reformed around the time of the gig’s 40th anniversary and have just played their own 50th birthday concert in Spalding, with original guitarist Rob Munton flying in from Australia especially for the show.

Colin said: “Since reforming we’ve appeared at a function attended by HRH Princess Anne, and also made a special appearance at Liverpool’s famous Cavern Club.

“It’s great to be back, the music never stops in you, it’s in your blood – it’s great to have all our fans back supporting the group second time round.”

Mr Ward and his bandmates carried out the official unveiling of the plaque – which is Spalding’s fourth blue memorial – when they also hinted at plans to play a concert in the town on the 50th anniversary of Barbeque ’67, which will also fall on a Bank Holiday Monday. The plaque’s installation was made possible and funded thanks to the Spalding and District Civic Society, Mr Ward, Nigel Wilkins and district councillor Elizabeth Sneath.

Hendrix’s guitar work has been described as ‘nothing short of legendary’ with others commenting it was hard to tell where the musician ended and his guitar began. He is widely renowned as one of the most influential guitarists in rock history, pioneering the possibilities of the electric guitar – but just three years after his Spalding performance he tragically died on September 18, 1970, aged just twenty-seven.

For more information about Sounds Force 5 visit www.soundsforce5.com or to find out more about the Red Lion Hotel, visit www.redlionhotel-spalding.co.uk