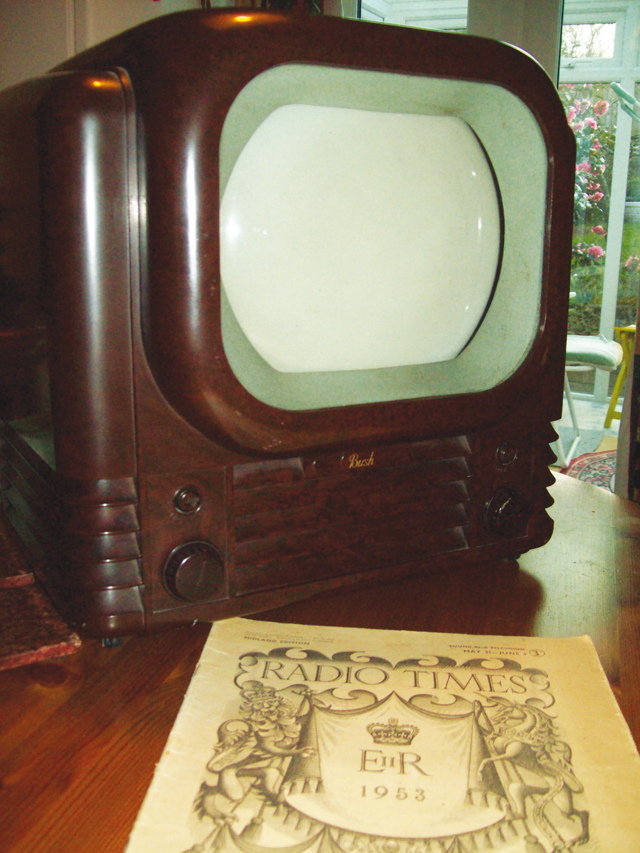 When television came to Lincolnshire

I‘m sure, if asked, most people in Lincolnshire would say that television arrived at about the time of the Queen’s Coronation.
Many will remember their first glimpse of TV, when they arrived at their neighbour’s house to watch a tiny twelve-inch screen.

In fact the BBC’s television service began in 1936, billed as the first regular television service in the world, but was only available in London. The service was closed down in September 1939 at the outbreak of war. A Mickey Mouse cartoon was showing at the time, which faded from the screen – there wasn’t even a goodbye. The BBC handbook for 1940 noted that television would have been the ideal entertainment for the blackout. But there were worries that the signal from Alexandra Palace could be used by enemy bombers.

In 1943 a committee was set up to consider the future of television. Its brief was to plan for television in the large centres of population after the war. On 7th June 1946, the London station came back ‘on air’ and the first programme was the Mickey Mouse cartoon that ended the service back in 1939.

So what about Lincolnshire? There was a lot of interest from enthusiasts in Lincoln when it was announced that the Midlands transmitter at Sutton Coldfield was to come ‘on air’ – the first outside London. Lincolnshire was not part of the official coverage area, but the enthusiasts thought it was possible that its programmes could be picked up here. There was great excitement when the test broadcasts began. The front page of the Lincolnshire Echo on 11th November 1949 had a picture of a television set with the headline, ‘Lincoln TV test’. The paper reported sound and picture signals were well received.

This sparked a lot of interest. Adverts appeared saying, ‘Television will undoubtedly be enjoyed in many homes this Christmas.’ Stores urged potential viewers to call early to make sure they were on the waiting list. One TV dealer said the picture was as good as he’d seen in London. When the full power test transmissions started they were described as ‘excellent’. Orders poured in for sets and the waiting lists grew. The Co-op announced, ‘Having made our own tests of the reception from Sutton Coldfield, we are satisfied that this new wonderful form of entertainment is a practical proposition in this area.’ Lincoln City Council were worried about the new ‘H’ aerials appearing on properties and talked about having an approved list of contractors, but it was decided that this would be too dictatorial. Grantham councillors suggested a deposit of £5 for tenants wanting to put up aerials on council houses.

The Radio Times for 11th December 1949 carried a picture of the new Sutton Coldfield mast, with the headline, ‘Television comes to the Midlands.’ Articles in that edition were headlined, ‘Television takes a giant stride forward’ and ‘How to use the television tuning signal.’ Radio programmes still dominated that edition of Radio Times, but a couple of programmes on the wireless were devoted to the new TV service. The television programmes were on the back two pages.

The service opened at 8pm on Saturday, 17th December 1949, with speeches by the Postmaster General and the vice chairman of the BBC. This was followed by a programme called ‘Stars in your Eyes’, which was described as a variety revue. Ice hockey followed at 9.15pm with the Nottingham Panthers; then ‘Newsreel’ and the main News at 10pm, which was broadcast in ‘sound only’.

Some people wondered who would want to watch television – surely it would hurt their eyes? But the reaction to the new service was good. A BBC reporter was with a family who were viewing for the first time. He noted how the family were sat around the set, with the young boys fighting to be nearest. The family compared owning a television to having a cinema or theatre in the room. They spoke about bringing friends in to watch it with them, and how they could sit by the fire and not have to push their way past theatre chairs to go to the loo.

The Lincolnshire Echo reported, ‘Happy Slaves of the TV Screen fare.’ It said the family routine established over the years would be destroyed at a blow. One new viewer told the paper that he was disappointed to have to go out to work on Sunday, as he’d miss the ‘Muffin the Mule’ puppet show on children’s TV. New television viewers were found in Spilsby, Boston and Skegness. As one writer said: ‘Put an ‘H’ aerial up on your roof and be amazed how many visitors you have!’

In October 1951, there was even better TV reception for Lincolnshire when the new northern transmitter opened at Holme Moss, in the Pennines. A special programme was broadcast from London to welcome the new viewers called ‘Hello Up There’ – I’m sure that went down well in the North.

In 1955 commercial television arrived in London but it wasn’t too long before Lincolnshire got a taste of the new ‘brash/popular’ ITV service. In 1956 programmes came first to the Midlands and then on 3rd November the Yorkshire Station at Emley Moor went ‘on air’. Lincolnshire viewers were invited to tune in to Channel 10 for a ‘fabulous galaxy of programmes and stars.’ After the opening ceremony, the line-up included ‘The $64,000 Question’, ‘Dr Jekyll and Mr Hyde’, and a Val Parnell ‘Salute to Yorkshire’ which starred Bob Monkhouse. People soon got used to their new companies: Granada (Monday to Friday) and ABC (on Saturday and Sunday). Why two companies? The idea was to put as much competition as possible into the system.

In 1965, it was decided that the reception should be improved for Lincolnshire and much of the east coast, and a new transmitter was constructed on the Lincolnshire Wolds at Belmont. It went ‘on air’ just before Christmas 1965 and carried programmes from Anglia Television. Adverts appeared urging viewers to try the new Channel 7 for better pictures. The mast also made the record books as the highest structure in the UK (which it held until recently). Belmont also meant many in Lincolnshire received the new BBC2 service for the first time.

The story of television in Lincolnshire doesn’t stop there – we haven’t mentioned Channel 4 or Rupert Murdoch and Sky. It was an era when we watched together. The ’50s, a gentle TV world, before the classic years of the ’60s and ’70s. We watched dramas and comedies that are still being repeated, and those big events like the first man landing on the moon. All before today’s multi-channel world. The set was in the corner of the room, not in your lap. Was it better then, or is it better now? I’ll leave that one with you!