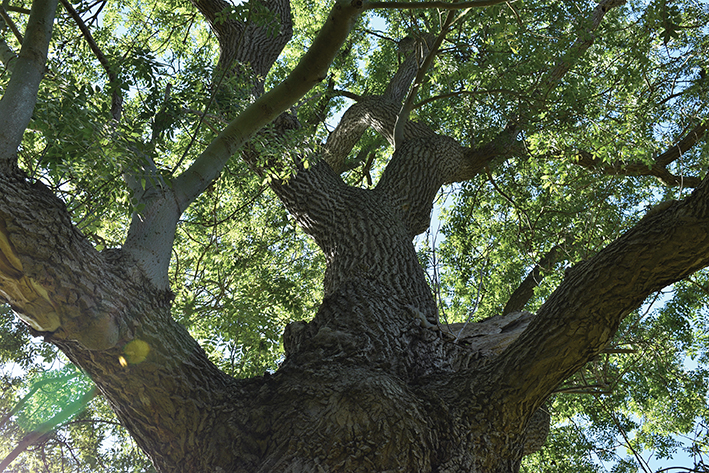 Where the ash grows

A veteran ash tree at Belton House leads Guy Petheram to consider how the species is both strongly present in our landscape and deeply ingrained in our culture.
Just a few yards from the car park a tree stands quietly, anonymous, as visitors arrive nearby and set out into the surrounding parkland. Most won’t give it, all broken limbs and cankered bark, a second glance as they pass by. There is no signboard singing its praises or encircling fence to signify a venerable resident.

Ash trees can be fine specimens and their botanical name, Fraxinus excelsior, speaks of their physical presence amongst woodland trees, rising as they often do above all others – ‘excelsior’ being Latin for higher. But on their own they are often not the grandest looking of trees, the most shapely or intact, as the travails of life leave many misshapen and damaged.

This old ash at Belton House, a National Trust property near Grantham, is one of those trees. It has lived a life and has the scars to prove it. And even though at around 270 years old it cannot match either the longevity of the oak or the age-twisted character of the sweet chestnut, it is nonetheless a veteran of its species.

“Give a tree a name, or call it a ‘Champion’, and people will remember and want to see it,” says Chris Shaw, lead ranger at Belton. “But this is just an old ash. In a landscape of 4,000 significant trees, here at Belton, including many impressive oak, lime, a 400-year-old sweet chestnut and many more, it’s perhaps not surprising that it gets overlooked. But, for me, it’s one of the best trees we have.”

Belton House was built in the late 1600s and the garden and parkland that can be seen around it today were originally designed by William Emes in the mid-1700s, influenced by Lancelot ‘Capability’ Brown, the pre-eminent landscape designer of the time and a contemporary of Emes. It is likely therefore that this ash was part of that original planting.

It seems odd perhaps, in a landscape as distinguished and rich as Belton’s, to pick this tree out for celebration. But this old ash at Belton is not just a fine tree in its own right but symbolic of a species that has pedigree. A tree both deeply ingrained in our culture and strongly present in our landscape.

Place names across Lincolnshire, as elsewhere in Britain, attest to its historic significance, from Ashby near Scunthorpe, to Ashby Puerorum in the Wolds and Ashby de la Launde in North Kesteven. ‘Ashby’ literally meaning the place where ash grow.

The association of ash woodland, usually coppice, with settlements, was testament to its importance. While oak may have been considered the most valuable timber for landowners to grow, ash was not far behind. In his book Silva – The Tree in Britain, author Archie Miles quotes John Evelyn, a famous English writer from the 17th century: ‘so useful and profitable is this tree, next to Oak, that every prudent Lord of the Manor should employ one acre of ground with ash to every other twenty acres of land, since in as many years it would be more worth than the land itself.’

Arguably this ‘congenial domestic workhorse’, as the contemporary naturalist Richard Mabey describes ash in his Flora Britannica, was even more valuable to ordinary people. A fast-growing and resilient crop that was strong and versatile to craft.

Traditionally it was fashioned into countless useful objects (not just the spear shafts from which its Latin name ‘Fraxinus’ is derived) including wheels, furniture, lobster cages, walking sticks, tool handles, ladders and oars. Today ash continues to be the material of choice for a less everyday object – the chassis of Morgan motor cars.

The old ash at Belton resides in an area of rough grassland akin to an open woodland that is punctuated by other impressive specimens (its closest neighbour is one of those ‘Champion’ trees – the tallest sugar maple in the UK). It has the bright elegant foliage, light canopy and deeply fissured bark representative of its species, with bulbous protuberances at the base of the trunk which form stabilising moss-covered buttresses, that grip the earth like claws – knobbly growths that can become enormous strange-looking swellings and are thought to be caused by the constant nibbling of grazing animals.

Immediately surrounding it is an extensive patch of nettles (more by design it turns out), amongst which a large branch, broken from the wounded limb above, now rests.

“Nettles are the best deterrent for keeping inquisitive visitors away from the tree,” Chris Shaw tells me. “Old trees and in particular ash can occasionally shed branches so rather than drastically pruning this tree we prefer to use more subtle safety methods if we can.”

The path mown through the grassy sward also keeps a healthy distance and steers walkers away.

There is much folklore and ritual associated with the ash, from predicting the weather to healing the limbs of children. “As a young ranger working in the Peak District more than 20 years ago, I remember an old boy describe the ash as the ‘Lightning Tree’,” says Chris. “I wasn’t sure what he meant until one day, sheltering from a thunderstorm, I witnessed an ash being struck by lightning and literally exploding.”

Once known in Scandinavian cultures as the tree of life, in Britain ash were long associated with healing and magic (druids’ wands were often made from ash). It was a much respected tree and Richard Mabey quotes an old Sussex resident: ‘As a child, I was taught never to pass an ash without wishing it “good-day”, and never must we harm an ash tree…’

Sadly, the virtues of this ubiquitous tree (there are perhaps 100 million in the UK) have become less appreciated in modern times – not much more than a useful hedgerow tree and good firewood. My own horticultural education began with learning about it as the ‘weed-tree’.

For such a splendid contributor to the natural and human history of these islands that is a sad fate but, more worryingly, it is now a tree very much in harm’s way. Since the arrival of ash dieback in the UK in 2012 we are faced with the real prospect of losing 90% of them.

“Lincolnshire has yet to feel the full force of the disease, as they have in other parts of the country like Kent and Derbyshire,” explains Chris. “At Belton our mature ash at least have yet to show signs of being infected, although every young one we have planted in the last five years has died, so it is a big concern.”

Back at the old tree he shows me a more immediate threat. A large cavity has opened up at the base of the trunk where ganoderma fungus has eaten it away from the inside out.

“It’s an age thing and only a matter of time before it’s beaten,” Chris says as he indicates the brackets and pale mushroom like fruiting bodies that stud the trunk further up.

A mature stag with impressive antlers grazes amongst the nettles nearby, perhaps knowing it won’t be disturbed there. “Hopefully though, this ash has a few years left in it,” adds Chris.