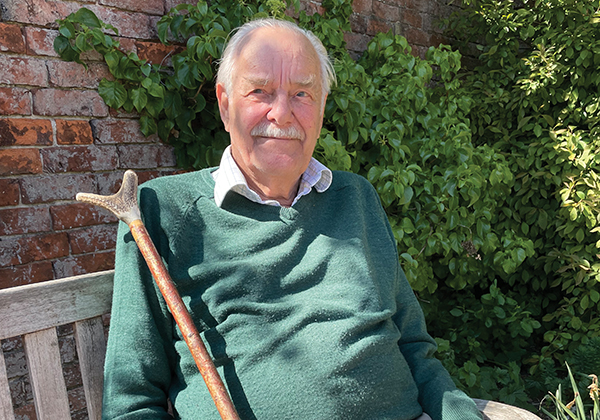 Where will our food come from?

Caroline Bingham met Sutton Bridge based Peter Clery, who after a prominent career in banking and agriculture now focuses his time on agricultural history.

A dinner celebrating Lincolnshire farming at Hemswell Court, with guest speaker Karen Mercer of The Worshipful Company of Farmers, was the prompt for Peter to write his latest book. The eventual launch this month of Feeding the Nation – A Celebration of Lincolnshire Farming, could not be more timely given the impact of the Russian invasion of Ukraine on global food supply and rising inflation.

Peter is a graduate of Reading University. His first job was as the economics correspondent for the weekly journal, Farmer and Stockbreeder. “Sadly, this title is no longer in print,” he explained, “but at the time it was essential reading for British farmers. I farmed in Sussex at the time too, so I could combine writing, agriculture and the complex economics of the industry all in one role.”

Peter spent the next decade with National Westminster Bank where after an initial period in the economics department he went on to establish the agricultural office of the bank. An invitation onto the board of the Lands Improvement Company saw its fortunes rise from a £4m loan portfolio to a balance sheet of over £40m with Peter at the helm.

He moved to Lincolnshire to run several thousand acres of land purchased in the county, which included the 5,000 acre Sutton Bridge Estate, land at Saltfleet and the Lea Estate near Gainsborough. Additional activities have included chairing the British Association for Biofuels and Oils (BABFO) and lobbying for the Renewable Transport Fuel Obligation, which is now on the UK statute book. Now retired, Peter and his wife, Elizabeth, live at Sutton Bridge.

Previous titles written by Peter include Farming Finance, published by Farming Press in 1975; The Wealth and Estates of Glastonbury Abbey at the Dissolution in 1539, an in depth analysis of the land assets, wealth and occupiers of Glastonbury when it was the largest monastic landholder in England; and Green Gold – A Thousand Years of English Land which details the shift of ownership of land in England from Anglo-Saxon times to the modern day.

Feeding the Nation provides an overview of farming history in Lincolnshire from the Domesday Book to the present.

The timeline provides clear evidence of the contribution agriculture and food production have made to the prosperity of the county and the importance of Lincolnshire as a ‘breadbasket’ of the UK. Where the book is most contentious is in the section giving Peter’s own view of where British farming is being steered currently by Government policy. In particular, he does not believe that landowners should be paid to take land out of food production.

“Four or so months ago, some of the thoughts I have expressed in this book, especially my informed criticism of Defra, were heresy against Government schemes – but circumstances can change quickly,” said Peter.

“I do not feel that I am alone now in voicing that we need to seriously consider how we will feed the nation in the future.

“As the pound weakens, food imports will become more expensive but seasonal, locally grown food is less expensive, involves less waste and fewer transport impacts to the environment. The ‘Landscape Recovery’ schemes currently proposed will not help small farmers – only the large estates benefit – and land will come out of food production. My view is that there needs to be a major diversion of funds to the Sustainable Farming Incentive scheme.

“I hope that this book will inform the general public about some of the truths around British farming but also the choices and lifestyle changes that might be necessary in the future to ensure food security for the nation.”