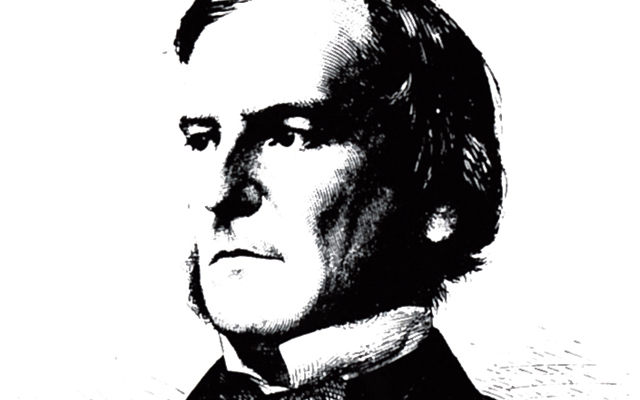 Who is the most Famous ‘Yellowbelly’?

Some would suggest Sir Isaac Newton or Sir Joseph Banks or Alfred Lord Tennyson, whilst others might think Baroness Thatcher or Sir John Franklin.
But ask an information technology (IT) professional and you may well get another name, George Boole. George who? Boole is regarded by many as the father of modern computing. He was a brilliant mathematician, noted for his work on the area of logic now known as Boolean algebra.

Boole was born on 2nd November 1815 in a house at the corner of Silver Street, near St Peter at Arches in Lincoln. His father, John, was a cobbler and the family was not wealthy. Young George soon had a reputation as a child genius. By the age of twelve he was translating extensive latin texts. His family did not have enough money to send him to grammar school, so he attended a National Society school on Michaelgate. By the age of sixteen he was assisting in the lessons and when he was twenty he opened his own school and was supporting his parents.

Around 1840, Boole established his own academy at 3 Pottergate in Lincoln. In 1964 a plaque was unveiled on this building by Sir Geoffrey Taylor, Fellow of Trinity College, Cambridge. The academy was later moved to Waddington.

George worked at various schools around the country and in 1849 he became Professor of Mathematics at Queen’s College, Cork, which later became the University of Cork. He settled in Ireland and is said to have been well liked by colleagues and students alike. In 1851 he was made Dean of Science.

George Boole’s most important paper was published in 1854 and had the rather snappy title of ‘An Investigation into the Laws of Thought, on which are founded the Mathematical Theories of Logic and Probabilities’. This was the paper in which he detailed the relationship between algebra and logic and it is this study on which much of today’s computer technology is based. His work remains fundamental to the way computers work to this day.

His research and writing continued alongside his teaching and in 1857, he became a fellow of the Royal Society.

In 1855 he married Mary Everest, niece of Sir George Everest, the distinguished surveyor after whom Mount Everest was named. They had five daughters. Boole died on 8th December 1864 and is buried in the churchyard of St Michael’s, Blackrock, Co. Cork.

A memorial to George Boole can be seen in Lincoln Cathedral in the form of a teaching window, depicting his favourite passage from the bible – the calling of Samuel. There is even a crater named after him on the moon, how many Lincolnshire people have achieved that?

It is said that any product that has a chip in it is dependent on Boole’s work. So next time you use a computer, a digital camera, a microwave oven, a mobile phone or even a credit card, spare a thought for one of Lincolnshire’s forgotten heroes, George Boole.