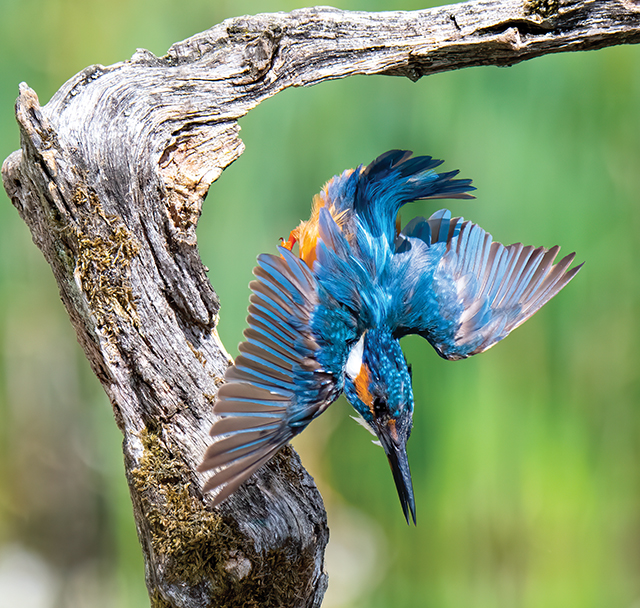 Barbara Young meets amateur wildlife photographer Dave Newman who has a passion for capturing the natural life of all creatures great and small.

Inspired by the natural beauty and diversity of the great outdoors, local wildlife has long held a special fascination for nature lover Dave Newman.
He has taken his passion for wildlife behind the lens and says he likes nothing better than spending his spare time exploring the hidden parts of rural Lincolnshire on the trail of elusive birds and wildlife, photographing them in their natural habitat.

Born and bred in the county, this unassuming “self-taught” amateur photographer from Sleaford grew up with a love of the outdoors and sport, but it wasn’t until 18 months ago that Dave decided to concentrate on honing his photography skills and focus on producing a portfolio of stunning wildlife images.

“Unlike me, my parents weren’t really the ‘go out and explore’ types – you certainly wouldn’t catch my mum up a mountain, or deep in woodland undergrowth, but for me there’s nothing better,” says 40-year-old Dave, who lives with his wife Izzy and four-year-old adopted son Michael, together with their two German Shepherd rescue dogs and family horse, overlooking 65 acres of fields and natural woodlands.

Although Dave works full-time in the offices of building, plumbing, electrical and mechanical engineers Newman Moore Ltd in Sleaford, he likes to spend any spare time he has outdoors, whatever the weather.

“When the weather is nice, I go down for a walk along my local River Slea three or four times a week during my lunch break, but mainly I go out photographing at weekends, especially on Saturday mornings when I make an early start and go further afield,” explains Dave.

He also makes sure that he keeps his camera handy on the patio table at home, ready to capture any piece of the action in the fields beyond his garden. “We are fortunate that there’s a mass amount of wildlife nearby, including herons, egrets, kestrels, buzzards, sparrow hawks, kites, hares, foxes and deer, but it’s private land, so getting close isn’t easy. The rarest sighting I’ve been lucky enough to make is the secretive bittern, which are mostly seen during winter.”

Dave points out that while “not everyone seems to appreciate what we have around us,” he hopes that capturing the wildlife he has on his doorstep on camera will hopefully inspire others to do the same.

Inspired by nature
Local birds of prey, including red kites, buzzards, kestrels, sparrow hawks, barn, little and tawny owls, all hold a special fascination for Dave, who says he always maintains a respectful distance while capturing their hunting instinct.

“They hunt for prey, while I hunt them to photograph,” he explains. ”Owls aren’t easy, mostly you’ll see them in very low light, but occasionally you can find them hunting during the day or early mornings when the sun’s up. Birds of prey are difficult to capture on camera; it’s making sure you get the right distance to take the shot, as well as the camera settings – high shutter speeds at times are required and of course stealth!”

Dave’s family also enjoy making the most of the countryside around where they live.

“Michael loves the outdoors and spending time at the stables with my wife’s horse – he’s not fazed by anything, apart from feathers! At the moment he’s too young to come out photographing with me, but as a family our hobbies are all outdoor based, and last month we took a holiday in the Lakes, where I went on the trail of red squirrels to photograph.”

“I was lucky enough to have a one-to-one session with Ben last year, which was remarkable and memorable, and I also admire Nikon’s English Wildlife ambassador, Richard Peters.”

Early starts
Weekends will usually find Dave up bright and early at 4am, when he gets dressed in his waterproof trousers, boots, T-shirt and hoody and sets out for a day’s photography. His cameras of choice include a Nikon D500, Nikon 500mm PF, Nikon 1.4 III TC and a Tamron 70-200 F/2.8 G2.

“Although you can find wildlife anytime of the day, early mornings and later in the day offer the most activity,” explains Dave, who says he likes to arrive at his chosen location early before anyone else. “With badgers, which are nocturnal, the best time to spot them is at dusk. Sometimes I plan to go and look for a specific type of wildlife, for instance if the weather is still and sunny, I aim for butterflies and dragonflies so anything else I find is a bonus.

“It’s just a case of being in the right place at the right time and when the light is extremely low. Yes, at times the general public can arrive at the wrong moment, but as with any type of photography, you can’t have it all!”

With stealth, patience, time, knowledge and skill, Dave has put his past experiences to good use and he is particularly proud of the collection of stunning shots of his favourite bird, the kingfisher.

“Kingfishers are simply an amazing bird,” he says. “When I took these shots their speed from diving into the water and back to the perch, was less than 1½ secs.

“I spent all day with the kingfishers on a small lake in South Lincolnshire and took more than 300 shots in total, but ended up with 51 of the best in the set.”

Dave says that the main challenges he faced that day were finding the right camera settings and balancing them.

“Not only did I have to be very patient, but it was important to get into a nice rhythm and not to disturb them,” he explains. “When you get close up, you can also hear them so generally I knew when they were on the way back to feed and watching their movements on the perch played a huge key to when they were about to dive too!”

Dave admits that tracking kingfishers has not been without its challenging moments: “Recently while targeting the kingfisher, I was hiding at the bottom of a river bank and slipped with both feet up to my shins in water and my camera waving in the air.

“Luckily my mate and fellow photographer Andrew [Scott] was sitting at the top of the bank and grabbed my camera so I managed to scramble back up the bank, but I did get the shots.

“On another occasion while trying to photograph a barn owl, I slipped into a muddy ditch and the owl just turned its head and looked at me, but amazingly it didn’t fly off, so luckily again I got the photo I wanted.”

Abundance of wildlife
Dave says he has noticed a definite increase in sightings of rare wildlife during lockdown.

“We’re lucky that in Lincolnshire we have an abundance of rivers, drains, lakes and woodland, many of which allow public access, but during the past few months I have noticed that as there have been less people about, the wildlife has flourished.”

As an animal lover himself, Dave is also in demand as a pet photographer.

“Although 95% of my photography is wildlife, I do also love pet photography,” he explains. “I’m not really a landscape type of photographer, but if I see something that says ‘wow’ to me I’ll shoot it.

“As we own German Shepherd dogs, action shots are the most entertaining. Letting me roam free and capturing their movements while playing (which gets loud and very ‘fang-tastic’) is fun. The most challenging thing about pet photography is getting an animal to sit or lie still in a certain position but I do enjoy a challenge!”

Dave insists that although he would love to work within the wildlife industry as a photographer, “I’m no professional”.

“I feel that in order to become a professional I’ve probably missed the boat,” he says. “However, I would love the opportunity to travel the world to pursue photography, but also feel that there is still much to capture within the United Kingdom.

“Having said that I would really appreciate the opportunity of being granted permission to go onto private land within the Lincolnshire area, so if anyone reading this has access to private land, lakes, a river section, or woodland that is known for an abundance of wildlife ranging from foxes and badgers to birds of prey, please feel free to get in touch and I’ll donate an image of their choice as a thank you.”

For those looking to follow in his footsteps and seeking to capture nature through a lens, Dave has the following advice: “Go out and practice, practice and keep on practicing – just get out there and enjoy every moment!”

To purchase a calendar visit www.andrewscottphotography.co.uk