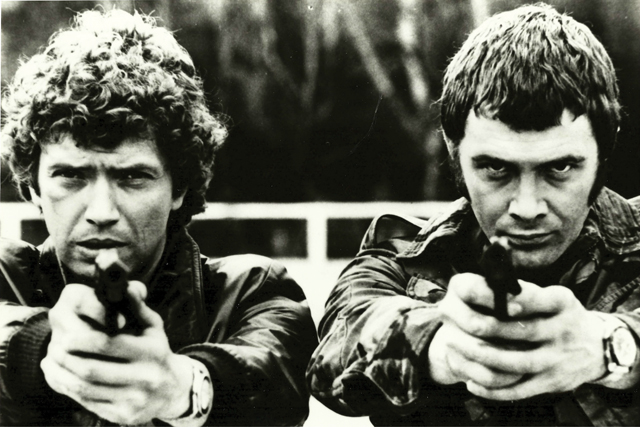 A touch of Hollywood glamour has come to Lincolnshire, with renowned film director David Wickes and his family taking up residence in Woodhall Spa, after falling in love with the town during a chance visit.
The Sweeney! director, who was born in Leamington Spa, Warwickshire, stumbled upon Lincolnshire’s very own Spa town while visiting a friend and took a detour to explore it on his return journey – now several months on he’s calling it home and has never been happier.

“There are a few Royal Spa towns, but I’d never heard of Woodhall. It caught my eye on the map while we were visiting friends, so on the way home we decided to stop and have a look around,” explained Mr Wickes.

“I just said to my wife Heide, ‘This place is like the Truman Show, everything down to the gardens and the people walking along the main street.’ But I can honestly say, I’ve never met such nice people in my life – everyone is so friendly, you walk down the street and people say ‘good morning’, you don’t get that in many places, and our neighbours are all lovely.”

If you’re a fan of Victorian shows or gritty thrillers, then chances are you’ve already enjoyed some of Mr Wickes’s finest work. He has an impressive back catalogue of both television and film productions including the 1980 hit film Sweeney! as well as the show of the same name, plus The Professionals, Philip Marlowe Private Eye and Jekyll and Hyde.

Having worked with some of the top names in the industry like Sir Michael Caine, John Thaw and Jane Seymour, Mr Wickes says his love of showbusiness began at an early age.

“I come from a showbusiness family. My father was a famous illusionist, although he warned me never to get involved, so of course I did!” he explained, adding: “He wanted me to have a proper job, like an estate agent or something, but when I came out of the army I decided I wanted to work in films and television.

“I’d had an obsession with them since I was a kid. I used to go to the cinema all the time for the Saturday morning matinees – The Lone Ranger, Roy Rogers and Hopalong Cassidy – that was when they had the children’s hour. It was absolutely wonderful, and that was how it all started.

“I wrote to Granada and all the television production companies in the country, and they were the only ones who replied and I won a place on their production training scheme.”

This was followed by a two-and-a-half-year-long directors’ course with premier broadcaster Thames Television, and on graduation Mr Wickes became a current events director on primetime shows including This Week and Today, in the UK, and News in Perspective and Struggle for Peace in America.

His directorial drama debut soon followed with the London based series Six Days of Justice, which was a big success. As a result he was invited to direct episodes of numerous major UK drama series throughout the 1970s, including Spider’s Web, Softly Softly, Public Eye and Special Branch as well as dozens of TV and cinema commercials.

Towards the end of the 1970s Mr Wickes directed the iconic shows The Professionals and The Sweeney, the latter of which he took from the small screen and into the cinema, in a style that would mark his future work. The film was a box office smash and was the first Western-made picture to be distributed in China.

More television work – an adaptation of George Simenon’s novel The Prison – followed, along with his next film, motorcycle drama Silver Dream Racer, starring David Essex and Beau Bridges, which is currently the subject of remake rumours, with singer Robbie Williams in the Essex role.

The early 1980s took Mr Wickes to Hollywood, where he successfully negotiated with the estate of the great crime writer, Raymond Chandler to adapt some of the Philip Marlowe series for television. Starring Powers Booth it too was a smash hit, winning rave reviews, big ratings and several award nominations.

Mr Wickes would relish the opportunity to work with such great actors again. He said: “I love working with Michael Caine – he’s a real professional. The other two I would like to direct again are Edward Woodward and John Thaw, although sadly they’ve both passed away. Nothing was too much trouble for John Thaw – he would give you two or three different interpretations to discuss, and then he’d do a fourth. He was just wonderful.”

Having resurrected The Professionals, under the title The New Professionals, Mr Wickes is now working to bring something slightly different to our screens.

His latest project, Venus Rising is to be set in Florence, Italy, during the swashbuckling Renaissance period and promises to be ablaze with danger, intrigue and spectacle, as well as being soaringly romantic.

“It’s one of the greatest stories in history,” said Mr Wickes. “It focuses on one of the best-loved paintings the world has ever known – Botticelli’s ‘The Birth of Venus’.

“This one’s a real game changer. What happened in Florence in 1475 altered the way the world sees women. In that magical year, one young artist and one beautiful girl altered our view of women forever. I can’t wait to tell the story.”

The production is still in its early stages, although Mr Wickes has been in talks with some big Hollywood names to take the lead roles, and if that isn’t enough to be getting on with, he also has a couple more ideas up his sleeve.

“There are two things I would love to do. I would love to make a version of Raffles for television and the other is the Boer War Mafeking Siege of 1901, which is a famous children’s story and a very heart-warming tale of children’s courage.”

Who knows, maybe Lincolnshire itself may find a starring role in one of Mr Wickes’s forthcoming productions, having found a way into his affections.

“It’s a lovely place, there are some lovely things here. Lincoln Cathedral is fantastic – I’d never seen anything like it until I came up here! I’ve lived all over the world, but Woodhall and Lincolnshire have definitely got a lot going for them,” he added.