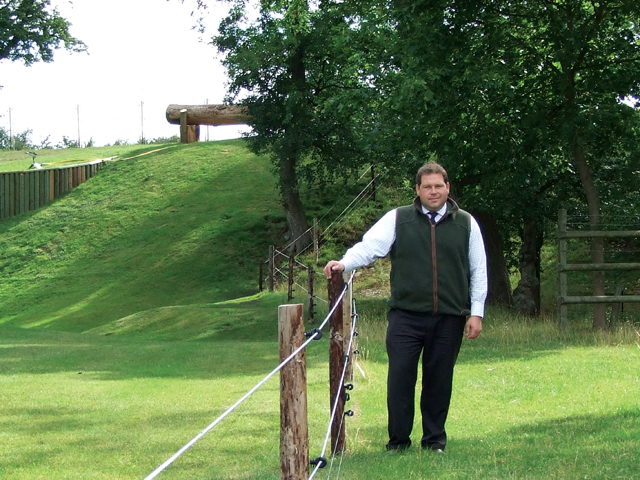 Working with a passion…

Burghley’s Estates Director, David Pennell gives an insight to the workings and maintenance of this beautiful estate.
It wouldn’t be that hard to be overwhelmed by the enormity of the job that David Pennell took up last September. Almost one year ago David, father of three, became the estates director at Burghley, home to the magnificent Elizabethan Burghley House and its wonderful Capability Brown Park. The job, like the estate, is huge and varied and in general involves overseeing the estate and its assets which includes not only the immediate park and surrounding farmland but many farmhouses, tenants houses, hotels, and pubs in and around Stamford. The community shops in nearby
Collyweston and Barrowden are run by the tenants and we just give them a helping hand if needed. It also takes in the maintenance of the fabric of the house itself. “It has been and still is a big learning curve and a huge role but I am loving it. The scale of some of the buildings is amazing to say nothing of the house and its seventy-two chimneys,” says David who is clearly eminently enthusiastic and not at all overwhelmed by his job. “In recent times the role has changed as the estate has to ensure that it maximises its resources and at the same time balances the move forward with retaining them for future generations to ensure the continuation of the estate, family and employees.”

David oversees an immediate staff of seventy-two which includes foresters, gardeners, gamekeepers, office staff and a full-time maintenance team of painters, decorators, joiners and specialist Colly Weston slaters and their apprentices who look after the many acres of roofs which are made of the local slate of which Burghley has the last deposit in the area. “At the moment it is not economical to work the deposit, but hopefully that is another project for the future,” says David who likes to be at his desk at 7am each day attending to the paperwork before the phone starts ringing and the emails start landing in the in-box. He says; “Ultimately the best way to learn about the job and the estate is to get out to see and liaise with the people who keep the place running. One of the best aspects is meeting the people involved who are passionate about Burghley and have made it what it is today and seemingly with an amazingly laid-back efficiency. “The job is also variable and involves much multi-tasking. One day I can be discussing a new development and the next the possibility of replacing a window in a cottage. Although even that can be a challenge as most of our properties are listed buildings.”

David, originally from neighbouring Norfolk, began his career with a degree in Agricultural Business Management from Wye College in Kent after which he started his professional training on the Goodwood Estate in Sussex followed by eight years at Cluttons in Arundel before being the resident agent for the 16th Duke of Norfolk’s family estates in Arundel. “I nearly studied history which is a big passion of mine and where my interest in these kinds of estates comes from – how they came into being, became what they are and how they continue to survive.”

It is not only the old trees in Burghley Park that have already made an impression on David. “One of my favourite places is High Park at the top end of the cross-country course. I love the view of the fields and trees and the newly planted avenues and already being able to see what they might look like in the future. It is a real privilege to be able to work in this wonderful environment.”