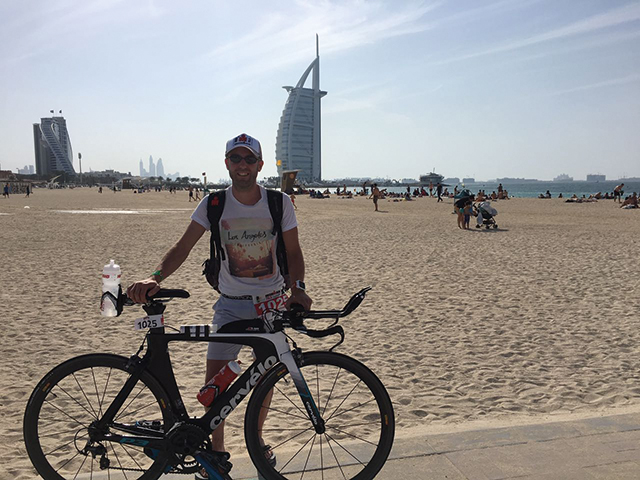 A demanding life in farming is no obstacle to Adam Madge’s athletic ambitions as Kate Chapman finds out.
Training to compete on the world stage in any sport is no mean feat – but imagine having to fit your regime around a physically demanding job like farming.

That’s the reality for Adam Madge (35), who has set his sights on reaching the triathlon world championships after only taking up the sport seriously three years ago.

Adam, who farms in the village of Stroxton, just outside Grantham, currently competes in the Half Ironman event or Ironman 70.3 – for which he must complete a 1.2-mile open water swim, 56-mile cycle ride and 13.1-mile run to the line.

With several successes already under his belt, he is now aiming to qualify for the World Championships in South Africa later this year and would ultimately like to tackle the full Ironman discipline at the same level.

“Farming and Ironman are completely different worlds – but I really enjoy both. They are two amazing lifestyles that for me work really well together,” says Adam, who has just moved into competing in the 35 to 39 age category.

“I qualified for the duathlon World Championships a couple of years ago, that was my first international experience – but I absolutely loved it. I love racing on the big stage, with all the crowds and being able to represent my country, I was very proud.

“With the way I am gearing up at the moment, the way I am feeling, I stand a reasonable chance of making it to South Africa – I really feel I’ve not reached my full potential yet.”

Adam, who farms alongside his dad David, growing sugar beet, wheat, barley and oats on 185 hectares, where they also keep 400 breeding ewes and a fifty-strong herd of Limousin cross cattle and run their own contracting business, has always been a keen sportsman.

His passion for running began at school when he competed over 800m and 1,500m on the track and in cross country events. Adam always felt he would struggle to achieve that level in running but was put off trying the triathlon, fearing he wasn’t a strong enough swimmer.

After completing his studies at Riseholme Agricultural College, he worked for various contractors before heading back to the family farm and three years ago, after persuasion from a friend, he finally decided to try the triathlon and went on to join his local club at Belvoir.

“I just went from strength to strength. At the moment my personal best is 4 hours 56 minutes, and I think I’m capable of a lot faster,” he says.

“But it’s not just about doing the three sports; you’ve got to be able to last the distance. I have a reasonably good, strong swim and a good bike and then it comes to the run and previously I’ve not been taking enough nutrition on board, so I’ve been working with my coach and the sport science department at Lincoln University on what we can do to help that, and hopefully we’ve about got it sorted.”

Adam got a feel for the sport with a few midweek mini-triathlons, as well as other local events, and competed on the world stage for the first time in 2016, lining up alongside 2,000 others in Barcelona.

He then placed 29th in the 2016 World Duathlon Championships in Aviles, Spain, after completing a 10k run, 40k bike ride and 5k run and last year took part in a half-Ironman competition in Dubai.

“That went well, but I still wasn’t quite where I wanted to be, but it was an amazing experience in very hot conditions. By the time we finished it was 36 degrees, so not only do you have to take into account nutrition, but hydration too,” says Adam, who is sponsored by Deep Heat and Great Northern Physiotherapy.

“I’m going back there again this year – I feel I have some unfinished business and that’s where I’m hoping to get close to qualifying for the World Championships.”

Due to the nature of his occupation, Adam plans his training and events carefully. December is a quiet month on the farm, which meant he was able to attend a three-week training camp in Lanzarote at the end of last year, in preparation for the 2018 season.

“I plan with my coach around life on the farm. We know there are busy periods, such as lambing, harvest, drilling and putting on the fertiliser.

“Dad does a fair bit of shooting, he goes out with his dog, so we cover for each other, but he’s been very good to me and is very proud of what I’ve achieved,” he says.

Adam’s training schedule varies, but he tries to fit in between 10 and 15 hours a week around his farm duties, which can often make for early mornings and late nights. Four days a week he is at his local pool at 6am for an hour’s swim before work, with running and cycling planned in the evenings, while weekends can involve sessions lasting four hours or more.

He adds: “With having the sheep, farming is quite a manual job, so we do stay reasonably fit, but I’ve done a few little fun workouts – pull ups on the plough and lifting some bales – just to keep it fresh.

“Farming can be quite a lonely life, with it just being me and Dad we often don’t see many other people – apart from the odd lorry delivery driver – so it’s great to have my sport as it gives me something away from that. They are two very different worlds, but each provides me a break from the other.

“My focus is on the half-Ironman distance at the moment, but ultimately I’d like to step up to the full distance and just achieve the best results I can.

“If I can travel the world, doing the sport I love and then come back to a job I love, I am definitely on to a winner.”

To contact Adam about sponsorship opportunities email him at Adam.Madge@live.co.uk