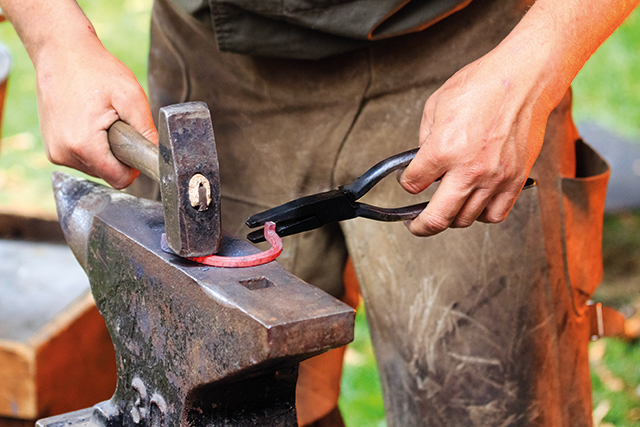 As part of The Game Fair’s 60th anniversary celebrations, an amazing £5,000 prize fund is being put up for this year’s international farriery competition.
The Game Fair Shoeing Lab Farriery Championship, held for the first time in 2017, is back by popular demand and is expected to attract lots of attention when The Game Fair is held at Ragley Hall in Warwickshire from Friday 27th to Sunday 29th July.

Held across three days, the competition is open to farriers from across the world who will be split into two categories: Apprentices and Seniors. The judges have been confirmed as Mark Milster (USA), Jim Keith (USA) and Mark Caldwell (England), with Danny Bennett continuing in the chief steward role he performed last year.

The competition itself will be held under cover in a structure housing eight shoemaking stations, with plenty of room for competitors and stewards alike.

Competitors will be tasked with replicating a specimen shoe against the clock and will be judged on quality and dimensions. After four eliminating heats, the eight talented finalists will then meet on the Sunday to compete in shoeing a horse against the clock.

The top prize is £1,000 cash, £1,500 worth of products and the winning trophy. Frenchman Mathieu Delcroix won the senior class last year, with Matt Argo picking up the apprentice prize. There was a big international flavour last year too, with entrants from Spain, Holland, Belgium, France, Scotland, Wales, England and one all the way from India.

Organiser Kelvin Lymer, himself a farrier in Worcestershire for more than thirty years, said: “The idea was to try something different from the normal country show competition and turn it into an international knockout championship. The inaugural competition last year attracted a lot of media attention due to the huge prize fund and it was a runaway success, attracting farriers from all round the world. So we’ve decided to run it again using a similar format. It will be a great spectacle, with lots of action.”