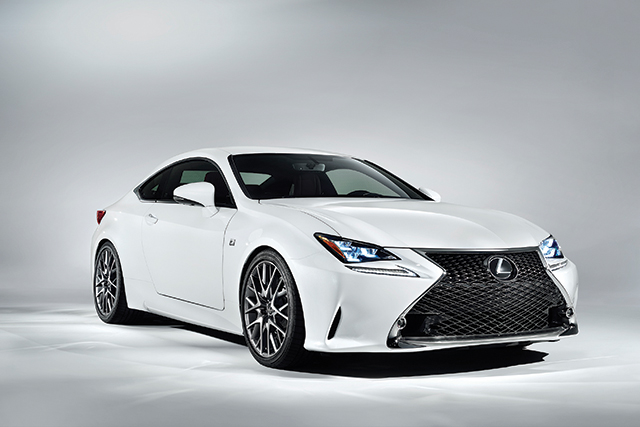 A stylish addition to the Lexus range

The new Lexus RC 300h is driven by a hybrid powertrain, which is rare for a sports coupe.
It produces a respectable amount of power – 223PS, to be exact – but the amalgamation of a 2.5 litre petrol engine and an electric motor isn’t overly adrenaline-inducing, especially when you realise that Lexus has capped the maximum speed to 118mph for frugality reasons.

The dash to 62mph isn’t setting any personal bests either, taking 8.6 seconds to get to the goal. Still, it’s not exactly slow – and a remarkably economical 57.6mpg is possible. What’s more, the CO2 emissions figure is low at 113g/km.

While it isn’t a champ in the ‘first-off-the-line’ department, it does ride splendidly and is surprisingly comfortable for a vehicle of this class. It is quite a weighty machine, but it holds well in the twisty bits, even if the lack of ‘oomph’ from the hybrid engine doesn’t really encourage the driver to push on to discover the limits. By its own nature, the RC 300h is far more fulfilling to waft around in than it is to drive like a sports car – and that is no bad thing at all.

DESIGN
The design department is where this Lexus really shines. There is no denying the RC 300h is a very noticeable car – indeed, in terms of style, it is the most twenty-first-century ride in its sector.

The Lexus is angled forward, much in the same way a cat arches its back before it springs upon its prey. The style in the cockpit is pleasingly swanky, too. A massive infotainment system screen sits behind a bar-shaped structure, comprising two air vents and an analogue clock, while the bulk of the controls are on the centre console that flows from underneath. It looks marvellous, and the quality of materials used in the cabin equals the excellence of the design.

KIT
Lexus does a great job of including lots of toys as standard. In fact, the Japanese motor-maker is well regarded for its small options list, and instead looks to buyers to select the most appropriate trim level for their needs.

There are three trim levels to pick from: Luxury, F-Sport, and Premier. All RC 300h variants are liberally equipped with heated leather seats, climate control, cruise control, and parking sensors. Sport adds to the lively look of the RC, fitting both exterior and interior design touches and adaptive suspension, while Premier adds a top-end sound system and some additional safety features.

VERDICT
Spend some time with the Lexus RC 300h, and you will soon realise that this isn’t an out-and-out sports car. Instead, it’s a very comfortable machine with a delicious dollop of sports coupe charisma. If you really want to stand out from the crowd, the RC 300h will certainly draw looks as it quietly, stylishly and efficiently passes people in the street.