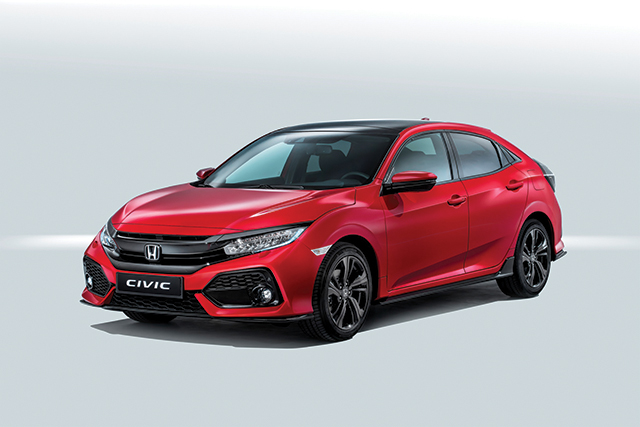 The Honda Civic is one of those Japanese brands that has never faded away or changed into anything else, and it’s remarkable to think it’s been on our roads since 1972.
The 2017 Civic is the 10th generation of the model, and Honda claims it wanted to bring back the essence of a practical, yet entertaining vehicle to drive. To do this, the firm has spent time re-engineering this fresh Civic from top to toe.

The all-new Honda Civic marks the introduction of two petrol units – a 1.0-litre three-cylinder ‘VTEC Turbo’ and a 1.5-litre four-cylinder powerplant. The 1.0-litre yields 129PS, and will do 55mpg, while the 1.5-litre produces 182PS and 48mpg of fuel economy.

Undoubtedly, the tenth incarnation of the Civic is an improvement over the last model, handling well on the test route that we took it out on around Barcelona in Spain. And the new power units – of which we drove the 1.5-litre variant – are first-rate, with lots of keen delivery, although the 1.5 i-VTEC Turbo Sport is not as potent as its athletic body suggests. The new ‘VTEC Turbo’ engine can be joined to a CVT automatic gearbox, but we’d recommend trying the six-speed manual gearbox as it feels excellent in the hand and gratifying to work with. It’s also to the Civic’s credit that it stays hushed and refined, regardless of the flashy undercurrent.

The design of the all-new Honda Civic has changed. The exiting model is rounder, but the new Civic is like a compact saloon. It looks wider and smoother around the nose area, and the rear has an angular, level shape. Inside, the split-dash has been replaced by a smarter design – reminiscent of the lovely 90s Honda dashboard layouts. This is a nod to an age when the Japanese automaker made some of its best cars.

Topping the features of the new Civic is Honda’s ‘Connect’ infotainment unit, which is companionable with Android Auto and Apple Car Play operating systems. The other headliner, in terms of kit, is Honda’s safety technology bundle, known as ‘Sensing’. It merges several bits of tech to keep you safe and sound. Features include lane keeping assistant, forward collision warning adaptive cruise control, and traffic sign recognition.

Honda has already announced the price tag of its up-to-date Civic, and it will start from £18,335 increasing to £27,295, depending on which trim level you want.

The all-new Honda Civic is a great model from the Japanese firm, and brings it right into serious competition with hardcore rivals like Ford’s Focus and VW’s Golf. The way the 10th generation Civic looks, feels and goes means the opposition should be worried. Now we must wait for the diesel and the ultra-hot Type R to make their entrance.