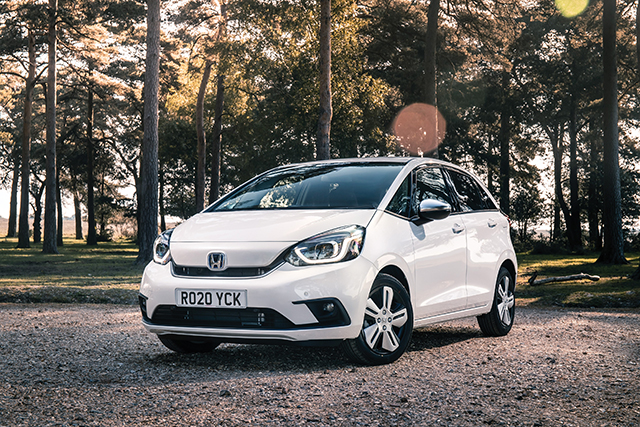 Honda’s fourth generation Jazz supermini switches to full-hybrid power yet still keeps the same old practical virtues. For the first time there is an SUV variant, the Jazz Crosstar.

The Jazz and Jazz Crosstar come only with one engine – the brand’s e:HEV powertrain. This is a full-hybrid unit – so properly electrified like a Toyota Yaris Hybrid, rather than being only mildly electrified like the MHEV unit you can now have in a Ford Fiesta. The difference is important because a full-hybrid can have far more reliance on battery power, especially in urban conditions. In this case, it’s a 1.5-litre unit putting out 108bhp which uses two electric motors and a compact lithium-ion battery pack. The combustion engine sends drive through a clever fixed-gear auto transmission which Honda reckons is smoother and more efficient than the type of belt-driven CVT set-up the Jazz had before (and the one that Toyota uses in its hybrids).

Basically the whole set-up is a downsized version of the 2.0-litre electrified engine used in the CR-V Hybrid and as there, you get selectable drive modes. Most of the time at the wheel of this Honda you’ll be in ‘Hybrid Drive’, which combines the engine and the battery pack in the most efficient way possible while recovering electricity from deceleration and storing it for future use. ‘EV Drive’ forces the Jazz to run in electric-only mode (though it can only do that for very short distances). And the ‘Engine Drive’ setting combines the petrol engine and the electric motor output for maximum performance. In this mode, the e:HEV powertrain gives the Jazz a 0-62mph time of 9.4 seconds and a maximum speed of 108mph.

Honda has changed just about everything possible on the outside but it’s a Jazz and you know what? It still looks like a Jazz. Slightly bulbous and unthreatening it remains but some of the detailing is now a bit sassier. At the front, the split A-pillars are designed to improve forward visibility and there’s a pair of larger headlights and a chunkier bumper compared to the old model. It’s still pretty compact though, measuring in at about 4-metres in length. At the rear, the previous model’s vertically-stacked lights make way for more conventional horizontal units. Choose the SUV-inspired Jazz Crosstar model and you get roof rails, an elevated ride height, black plastic cladding around the wheel arches, two-tone paint and a bespoke grille, all in an attempt to introduce more of a Crossover vibe to this supermini.

Inside, there are wider ‘body-stabilising’ front seats supposed to reduce fatigue on longer journeys and the dash has a more minimalist, uncluttered look. Its centre touchscreen has smartphone-style swipe technology and incorporates wireless ‘Apple CarPlay’/‘Android Auto’ smartphone-mirroring. There’s also a digital instrument cluster. Perhaps the best news though, is that Honda’s clever ‘Magic Seat’ design remains in the rear, giving owners the option of either folding the rear bench flat or flipping up the seat bases to create a taller load space. Boot capacity is 298-litres with the rear seat in place – or 1,203-litres with it folded.

Honda does things differently – and we can’t help liking that. Whether the model in question is a Civic, a Clarity fuel cell vehicle or a Type R hot hatch, you’ll find that it’s been uniquely engineered and packaged – as is the case with this Jazz. This always used to be the supermini that motoring experts would recommend as the small car they’d buy with their own money. For us, it still is.