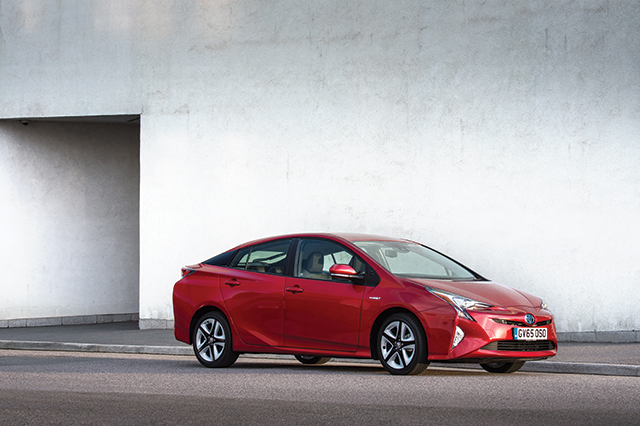 The petrol-electric car that bravely paved the way for hybrids when it hit the roads almost 20 years ago.
Back in 1997, the Prius was viewed by many in the same way one might look at an exotic animal in a zoo. We were mesmerised, but we were happier admiring the strange entity from a distance.

The Prius is more aerodynamically honed, but the fresh car’s talents are really found in its use of an innovative platform – the Toyota New Global Architecture (TNGA). This boosts cabin space, chassis refinement and keeps the mechanical side of things neatly tucked away. It also helps to make the car lower. And that is key to how the Prius behaves on the road.

But before we got behind the wheel of the all-new Prius at its launch in Valencia, Spain, we had to inspect the inside of the car.

The most noticeable aspect is that the characteristic mid-mounted instrument panel is still present, but the cabin now has less switchgear. And that’s a good thing, because simplicity definitely suits it better.

There are three styles of driving you can choose from: Eco, Normal and Power. You can skip through these quickly by pressing a button, and the ante can be picked up slightly by switching over to Power mode. Indeed, on Spain’s south-eastern Orange Blossom coastal roads, we were surprised at how entertaining the Prius could be when pushed into corners. It is, by no means, a car for driving enthusiasts, but due to its lower-slung deportment, body roll is negligible. This means the hybrid will thread its way around twisty tarmac – albeit rather clinically.

In town, the car is equally uncomplicated and light-footed. This became obvious when we needed to cut through the busy city of Valencia to find our hotel.

The all-new Prius uses a re-engineered 97bhp version of the 1.8-litre petrol engine found in its forerunner. And the familiar nickel-metal hydride battery pack that powers the 71bhp electric motor, is now 10 per cent smaller. Crucially, it can recharge through the generator more quickly, by as much as 28 per cent. It is also now housed deeper under the rear seat, meaning there’s no invasion of boot space.

But, as sure as eggs is eggs, the Prius never lets you forget that its main concern is fuel economy and minimal CO2 emissions. And here, more than anywhere, is where the Mk.4 impresses. The Japanese manufacturer’s own figures claim the car discharges a notably low 70g/km of CO2 and is good for 94.1mpg. We achieved mid-80s performance after our mix of expeditious rural and stop/start urban driving.

It is more evolution than revolution with the all-new Prius. Sure, some things have altered; but due to the popularity of the last three generations, you can see Toyota has come to the broad conclusion that ‘first is best!’