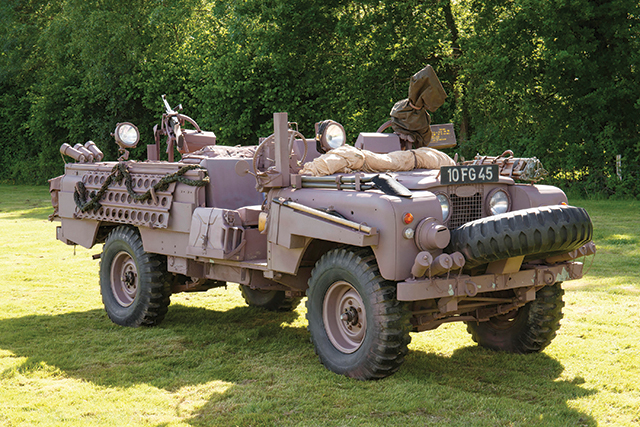 Four very special anniversaries will be celebrated at Land Rover Legends at Bicester Heritage in May, each one marking a highly significant milestone in the history of the Land Rover marque.
50 YEARS OF THE PINK PANTHER
The 50th anniversary of the entry into service of the Series IIa SAS Pink Panther will be commemorated with what is expected to be the largest-ever gathering of these fascinating vehicles, supported by two surviving examples of the Series One and some of the few surviving later 110 SAS vehicles.

The Pink Panther was born during the late 1960s, as a follow on from the adapted WWII Jeep and the Series One. The MOD acquired 72 Series IIa 109 Land Rovers for special ops missions and long-distance reconnaissance. Marshalls of Cambridge converted them to SAS desert duty specification, with modifications including heavy-duty springs and chassis, additional fuel tanks to carry 100 gallons, smoke grenade launcher, rifles, machine guns, hand grenades and an anti-tank rocket launcher. The Land Rovers were delivered to the SAS in standard green livery but the SAS had many of them repainted in pink. This might seem an unlikely colour for a military vehicle – especially one in service with the SAS – but it is actually the perfect colour for camouflage in the desert, especially at dawn and dusk when the ground in their theatres of operation takes on a red or pink shade. Thus the ‘Pink Panther’ name was born. Often shortened to ‘Pinkie’ the name was even applied to the vehicles the SAS kept in their original green colour. Pinkies would remain in service until 1984 when the coil sprung Hi–Cap was introduced as a replacement.

In the late-1970s, Land Rover built around 36 100-inch wheelbase prototypes for evaluation by the French, and later the Swiss, military.

The 40th anniversary of these exceptionally rare 100-inch prototypes – considered by many to be the best Land Rover that Land Rover never produced – will also be celebrated at Land Rover Legends with what is expected to be the largest-ever gathering.

In 1989 Land Rover unveiled its new Discovery at the Frankfurt Motor Show. The 3-door vehicle – deliberately described this way as part of the programme to differentiate it from the 2-door Range Rover, although both had two doors and a tailgate – actually shared the Range Rover’s chassis and drive train, body frame, and many other components.

In September 1994 Land Rover launched the second-generation Range Rover – 24 years after the original was introduced. The new car was developed in building P38a of the Solihull factory, and so became known as the P38a. This was undeniably a luxury vehicle with leather upholstery, premium trim and burr walnut rivalling the interiors of upmarket saloon cars, putting the four-wheel drive in front of a new audience.

For more information or to book tickets please visit: www.landroverlegends.com