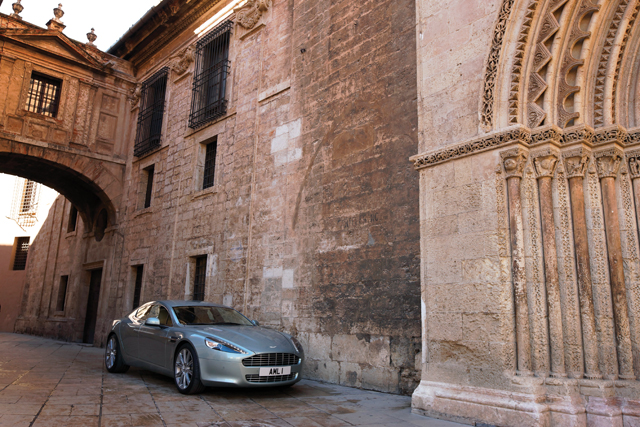 Attractive? More like entrancing. That’s the affect the Aston Martin Rapide has on people.

Hand on heart, I have never had so many people stop and stare at one of my test cars before. Even while writing this a man leaned out of his van to take a picture of the Rapide, parked on my drive. Now that’s either flattering or worrying. Do you really want a car that is going to be the centre of attention? I suspect, ‘yes’ is the answer, if you’re in the market for one of the most beautiful car brands on the planet.
This particular Aston Martin is very different from its siblings though because it has four doors and four individual seats. It means you can now take your family with you to share the thrill of being in one of the fastest and best-looking cars on the road today.

Now, I’m married with two small children. My youngest, only one, doesn’t know much about his cars yet, but my four-year-old daughter is learning fast. She certainly spotted the extra doors on the morning frost coloured (that’s pearlescent white to you and me) Rapide, and was inside the car in a shot. It was only then that I discovered you can get child seats in the individual bucket seats with ease. And without them in you can probably get away with being comfortable as long as you’re not too near the six foot mark. If you are over that, you’ll probably end up knocking your head on the sloping window frame. What’s even more functional, I discovered, is that the rear seats fold down to extend boot space from 301 litres to 750 litres. That’s some good load lugging space!

The Rapide features a hand-built 6.0-litre V12 engine, producing 470 bhp with peak power being delivered at 6000 rpm and 600 Nm (443 lbft) peak torque at 5000 rpm. A specifically tuned six-speed Touchtronic 2 automatic transmission features as standard, allowing the driver to change gear automatically or manually via the steering column-mounted paddles. All this makes the Rapide a true sports car – a thoroughbred which can be enjoyed by four people in unison.

Despite all that potential power and speed you can still drive the Aston Martin Rapide sensibly, especially if, like me, you’re carrying your family around. You can even go a long way before needing to feed the car. That’s because a new fuel tank has been incorporated to hold 90.5 litres, enabling the Rapide to deliver a range of over 300 miles without reducing the car’s sporting dynamics.

Behind the wheel, the Rapide never seems like a four door coupé. It genuinely feels like a supercar and is utterly pleasing in every way. If you can afford a car like this, then I’m jealous. In fact your kids’ friends will be envious too because, remember, this car won’t just be about you. There’ll be no excuses about not having enough room in your sports car to take the children to school. Your friends will all start wanting lifts too. You’re hooked though still, aren’t you?