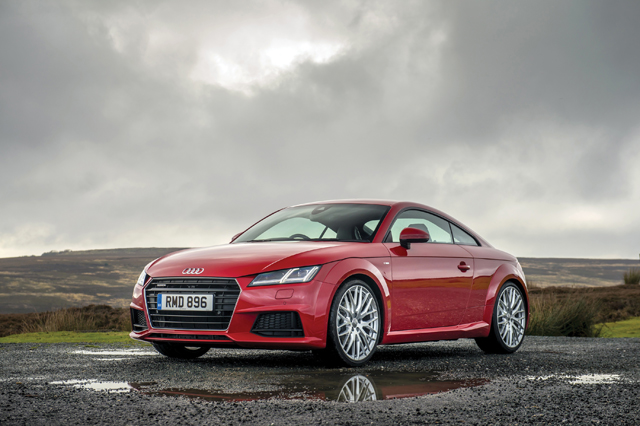 Audi really hit the jackpot when it introduced discerning customers to the Audi TT back in the late 1990s. The sleek coupé and the subsequent soft top version were immediate sales winners, awakening buyers to what else was in the Audi range that now totals around 50 various models.
Just arrived is the third generation Audi TT, initially in metal top form but with the soft top in the pipeline. There are also rumours of a stretched, full four-seat version being in the pipeline.

The UK market is the number one for the Audi TT, surpassing both Germany and the USA. So to move things on, Audi has spent serious time developing its successor. This has involved increasing its use of a blend of body materials to save weight, subtly restyling the body to reduce front/rear overhang and creating a more prominent frontal appearance.

What is clear, however, is that this latest model retains the Audi TT DNA without unduly ageing its forebears. This is a practice that helps with residuals – an Audi strong point across its complete car range.

At launch the range included both diesel and petrol fuelled models, with the flagship obviously being the all-wheel-drive Quattro. The first encounter features the 2.0 TDI turbo diesel version that delivers a highly competent and relaxed 182bhp with power maximising at a mere 3,500rpm.

Claimed performance of this model is a seriously quick 149.8mpg – if you can find somewhere to do it, with acceleration from rest to 62mph in a dazzling 7.1 seconds. The claimed combined fuel consumption is an amazing 67.3mpg, so if around the 50+ mpg mark is achieved, there can be no accusation of selfish fuel guzzling.

There is some obvious engine noise when starting up though on the move it settles down and conversation was possible at speeds, certainly up to the UK legal limit.

What this Audi TT is all about is a special quality of lifestyle, emphasised with the leather upholstery as standard on all versions. The test vehicle had cost extra heated front seats which proved their worth in the depressingly cold, dank test conditions.

Serious performance cannot be enjoyed and optimised unless the driver is at one with the car. This was the case during my lengthy driving session. The high backed driving seat provided generous proportions with support in all directions, plenty of adjustment that, together with the fully adjustable steering column, and excellent pedal positioning, ensured a true bond with this car. Overall vision was also better than I expected.

Obviously there’s a heck of a lot of new advanced technology on this latest TT. The most visually evident is the fascia that does away with instrumentation as we know it. It brings a new generation, virtual cockpit system based on a 12+inch LED screen in front of the driver that can be switched between classic view and Infotainment view. It’s an experience that could well indicate the way forward in car instrumentation. It does, however, need to be played with to be fully appreciated.

There is more practicality too. The large tailgate opens to reveal a very usefully proportioned luggage area, considerably larger than before and which can be increased by flat-folding the two small (child only, I suggest) rear seats. It should provide more than sufficient load capacity for a couple of adults.

To sum up, with character maintained, performance enhanced, top quality finish, plenty of innovation and choice to provide options to bespoke your own car, and a wide range of model choice, demand must remain strong. It’s a more than worthy successor that continues to ensure the Audi TT remains an iconic car. Price: from £29,125 – as tested £32,890.