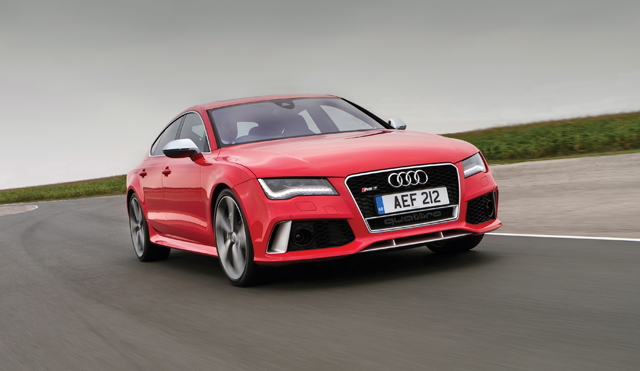 One of the benefits of being a motoring journalist is that most press cars come with a tank of fuel. This is necessary for the job, you understand. The thought of actually filling up a test vehicle and paying for it with your own wallet sends most hacks recoiling in horror.
But very occasionally a car captivates you so much that you really don’t mind throwing fistfuls of cash at it when the free juice runs out. The Audi RS 7 Sportback is one such motor.

Why did it seduce me? Well, the car is simply a God on four wheels. It looks amazing; it delivers more thrills than the fastest rollercoaster you’ve ever been on; it sits four adults in total comfort and it’s made exquisitely. So let’s drill down a bit further into the very essence of this stunning car and look at the root of its monstrous muscle.

With the help of its two turbochargers, the 4.0-litre TFSI petrol engine delivers its formidable peak power of 553bhp between 5,700 and 6,700rpm, and top torque of 516lb/ft between 1,750 and 5,500rpm. The turbochargers boost pressure, helping to generate incredible accelerative force. This gives the German goliath a phenomenal 0-62mph acceleration time of just 3.9 seconds and a governed 155mph top speed.

If you have Autobahn aspirations, then you can increase the maximum speed to 174mph by specifying the optional Dynamic package, and enhance it even further with the Dynamic plus package, which calls a halt to acceleration at 189mph.

Despite performance of this magnitude, the RS 7 Sportback nevertheless manages to keep a firm grip on reality where economy is concerned. Thanks partly to an engine start-stop system it can cover up to 28.8mpg on an average run.

In the RS 7, the Quattro permanent all-wheel drive system enables you to tackle long journeys in all weather, without fear of losing control. The car is also pinned securely to the road by an electrically extending rear spoiler providing additional downforce. And when it comes to scrubbing off speed there’ll never be a problem, because behind the huge 20-inch seven twin-spoke alloy wheels are four massive brakes which provide reassuring stopping power.

The interior of the RS 7 Sportback conveys the sporting theme with subtlety, but leaves you in no doubt that you’re travelling in a very special Audi flagship. RS logos appear in the dials with their white faces and red needles; on the flat-bottomed three-spoke multifunction steering wheel; in the illuminated entry sills; in the rev counter and in the displays.

RS logos are also punched into the front RS super sports seats with their pronounced bolsters, integrated headrests and honeycomb-quilted Valcona leather upholstery. The two-seat rear bench, which is standard for UK models, also has well-defined contours for optimum grip.

And, as befits the ultimate incarnation of the A7 Sportback, the RS 7 features a list of standard equipment, and it is possible to upgrade the inventory even further with a portfolio of driver assistance, driver entertainment and driver information systems, including adaptive cruise control, night vision, a Bang & Olufsen Advanced Sound System with fifteen speakers and 1,200W of total power. Awesome? I think so.