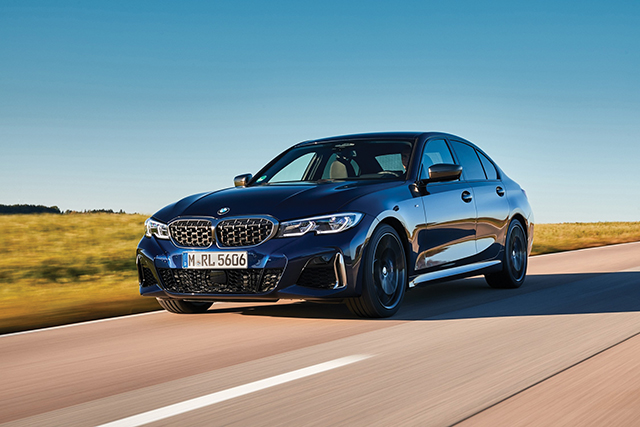 Since its launch back in the decade of space hoppers and flared trousers – the 1970s, for those of you who don’t know what I’m on about – over 15 million 3 Series models have been sold.

Many of the sales have happened here in Britain, but competitors like Audi’s A4 and Mercedes’ C-Class are constantly snapping at the 3 Series’ coattails.

These motors keep BMW from resting on its laurels too much, which is good because it keeps the bimmer sharp.

BMW’s 3 Series line-up entails a bunch of petrols and diesels – and the 330e hybrid. The engines can be massively powerful, and it’s the M340d xDrive I drove for this review.

The smooth diesel costs over £53k and comes with a three-litre turbo unit. This powerplant produces 340PS, and with the help of a quick-shifting eight-speed auto gearbox, 0-62mph is realisable in 4.6 seconds.

What’s more, the top speed is 155mph, which is brisk enough for most folk – especially in this country with our 70mph ceiling.

Even though the M340d xDrive is propelled by diesel, the car’s cabin is as quiet as a church mouse. There’s hardly any vibration from the engine, either. Much of the sound-deadening can be attributed to well-sealed window surrounds, double-glazing and a windscreen with acoustic glass.

The M340d makes light work of the UK’s well-worn road surfaces. It skips across potholes and sticks to corners like gum to the sole of your shoe.

Despite being known as a “compact” executive, the 3 Series is no small car. However, at the tiller, it feels lithe and light. The steering set-up makes driving the vehicle effortless, and the switchgear is intuitive, making the saloon perfect for trips around town or longer commutes.

There’s more room inside the BMW than you might imagine. It will seat five-up, although two adults in the rear will be more comfortable than three. This is due to the intruding transmission tunnel.

While it’s a low-slung saloon to get into (perhaps too low for some), the back doors are large, and there’s a good serving of headroom. Of course, you will also get your family’s belongings in the 480-litre boot.

The 3 Series has lots of side pockets in the load bay, too – and you can order luggage nets as an optional extra. Also, the BMW’s rear seats fold down if you want to load long or bulky items.

As with most motors, the declared fuel economy statistics for the 3 Series differ depending on how sizeable the wheels and tyres are. But, as a rule, the bigger the wheels, the thirstier the car becomes.

The M340d xDrive on test here returns up to 46.3mpg, and emissions are relatively low (considering the car’s performance) at 159g/km CO2.

Finally, and perhaps most importantly, the BMW 3 Series attained the maximum five-star grade when tried and tested by Euro NCAP. It achieved a genuinely incredible 97 per cent score for adult occupant safety, with tallies of 87 per cent in both pedestrian and child safety.