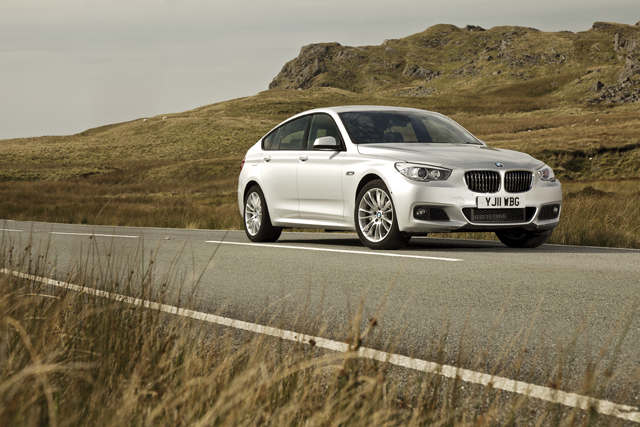 BMW’s 5 Series Gran Turismo hatchback is a curious mix of luxury saloon, 4×4 and estate. It has an assertive stance, a coupe-like roofline, and an eye-catching ‘face’.
According to BMW, lots of motorists like the high driving position of an off-roader, but don’t fancy a fully-fledged 4×4. This is what initially sparked the idea for the GT. The German car maker also wanted to produce something that had the splendour of a 7 Series, but delivered something a little less conventional than an executive saloon.

Inside the GT, the dashboard is similar to the 7 Series’ and includes BMW’s iDrive system. The high class hatchback has ultra-plush leather upholstery, compartments everywhere and it reeks of five star build quality. There is ample room for rear seat passengers and a vast panoramic roof provides them with a window to the stars. The big BMW has the same interior headroom as the X5 and there’s an ingenious split tailgate that can open as a saloon or a full hatchback, giving a generous, flexible load area.

On the road, the 5 GT M Sport is creamy smooth with a fantastic eight-speed automatic gearbox fitted as standard. The 530d M Sport I test drove was capable of 0-60 mph in 6.9 seconds and, under test track conditions, the car can go on to reach 149mph. That is seriously striking performance from a car that weighs over two tonnes (2035 kg). Also impressive is the factory-fitted dynamic drive control, which not only influences the gearshift dynamics, but also the accelerator pedal and steering assistance control map. This makes the car a doddle to drive.

Indeed, BMW has produced a model with a lot of character. That means it is different – and its looks have divided opinion among BMW aficionados. That said, the GT is undoubtedly a bold, upmarket car, with oodles of gadgetry and it is appealing to drive too. However, I reckon that being a passenger in the GT is a more remarkable experience and that is where BMW will score points with high-end fleet buyers. Sitting in the Gran Turismo’s limousine-like rear seats is utter luxury and, in my opinion, the best place to be in the 5 GT if you’re a go-getter who can afford to be chauffeured to your business engagements.