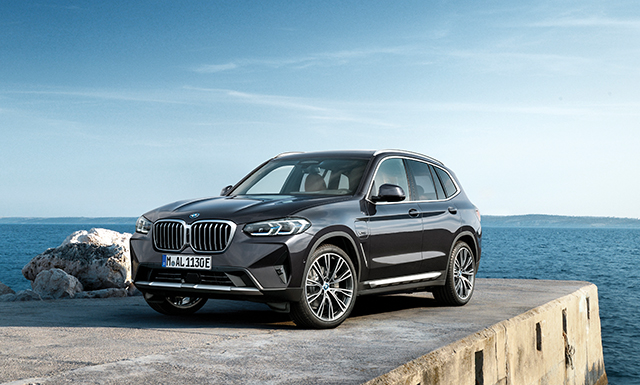 BMW has enhanced its BMW X3 and BMW X4 models with a comprehensive refresh that includes sportier styling together with modern interiors, new equipment and updated infotainment.

The strongest visual aspect of the enhancements is the redesigned front and rear section which, in the latest third-generation of the BMW X3, accentuates the robust Sports Activity Vehicle appearance. Its Sports Activity Coupé counterpart, the second-generation BMW X4, adopts the new front design and adds its own accentuation with the BMW mesh kidney grille and dynamic rear-end styling.

All versions feature BMW xDrive intelligent all-wheel drive and 8-speed Steptronic transmissions that are specifically tuned to match each engine’s characteristics, contributing to lower fuel consumption and reduced emissions.
B

oth model ranges are topped with M40i and M40d variants, which are even more dynamic when specified in Pro Edition trim. X3 customers can choose between xLine or M Sport trim on other versions, while BMW X4 customers benefit from M Sport trim as standard.

Both the X3 and X4 include enhanced equipment such as the BMW Live Cockpit Professional with 12.3-inch Control Display and automatic air conditioning with three-zone control. X3 xLine models also include sports seats with upholstery featuring a new generation of Sensatec in the new Ray grain.

The UK market launch of the new BMW X3 and the new BMW X4 will get underway in September 2021, following the start of production at BMW Plant Spartanburg (USA) in August 2021.

NEW BMW KIDNEY GRILLE AND FLATTER HEADLIGHTS
The BMW kidney grille is larger than before and now comprises a single-piece frame. A black bar, in which the iCam is positioned if fitted, provides visual separation of the grille. The frame is finished in pearlescent chrome and the grille bars in satin-finished aluminium. The front headlights, which are now about 10mm flatter, feature full LED technology as standard. As an option, darkened inserts in M Shadow Line lights can replace the light components in the headlights. Adaptive LED headlights are standard and BMW Laser Light with a range of up to 650 metres is available as an optional upgrade.

NEW FRONT APRON AND VERTICAL AIR INTAKES
Below the headlights, vertical air intakes frame the front bumper. In the new front apron, amply-sized surfaces in body colour and the robust underbody protection reinforce the presence and high-quality feel of the new BMW X3. The window graphics and roof rails are in satin-finished aluminium as standard.