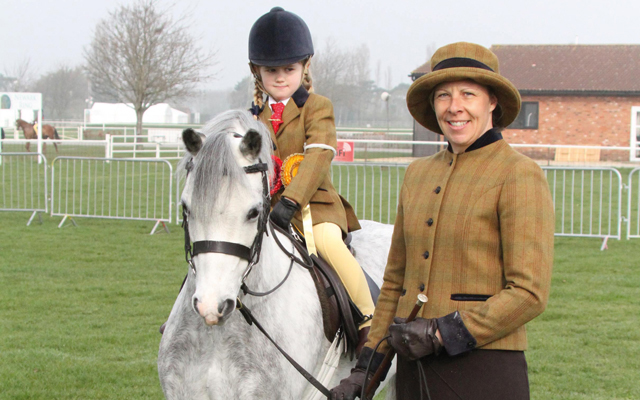 On 30th March BSPS Area 4b held their annual Winter Show. The ever increasing cost of indoor venues resulted in a brave move to Newark Showground, on the beautifully maintained outdoor rings. Our faith in the weather was rewarded with a wonderful spring day and we were supported by a fantastic standard of entries from all over the region and beyond, with the Working Hunter classes carrying on well into the early evening.
It was a successful day for all of our area members, many of whom were out on new rides – it is always nice to see new combinations with the whole season ahead of them. In particular, we enjoyed welcoming new members Clemmie and Jemima Hitcham, Daniel Bailey, Holly Bignell and Amelia Embleton. Amelia showed early form with a win in the M&M Lead Rein, riding Cosford Chardon and they all enjoyed some good placings with a lot of fun along the way.

Rebecca Crosbie-Starling and Isabel White both saw wins in the Working Hunter section, with Ballycreely Boy and Cre Dubh Boy respectively; Rebecca and Ballycreely Boy going on to stand Champion.

In the Show Pony section, Danielle Crookes and Wyld Amethyst took the Intermediate Show Riding Type. Olivia Rocks took second place with her new ride Greenbarrow Mr Darcy. James Read and Fofsway Dominic came up from second place in the First Ridden to take the Mini Championship after a very tidy Set Show. James was very pleased to qualify for the Champion of Champions at the Summer Championships in August.

Congratulations also go to Amy and William Taylor, Phoebe Rocks, Georgie and Ellie Elingworth, Ruby Verni, Lucy Glover and Freya Cade, all of whom had some good placings and collected their first points of the season towards the Annual Points Presentation, which will be held in November at the English Golf Union in Woodhall Spa.

The committee would like to thank everyone who worked hard to make the show a success and in particular the judges and stewards without whom there would be no show !

Please note that the Spring Show will be held on 17th May at Newark Showground and will include RIHS Qualifiers as well as many other classes which are open to both members and non-members.

A Junior Show for riders aged thirteen years and under will be held on 21st June at Eagle Moor, near Newark. Everyone is welcome and there will be both BSPS and unaffiliated classes. All classes will be open to both members and non-members.