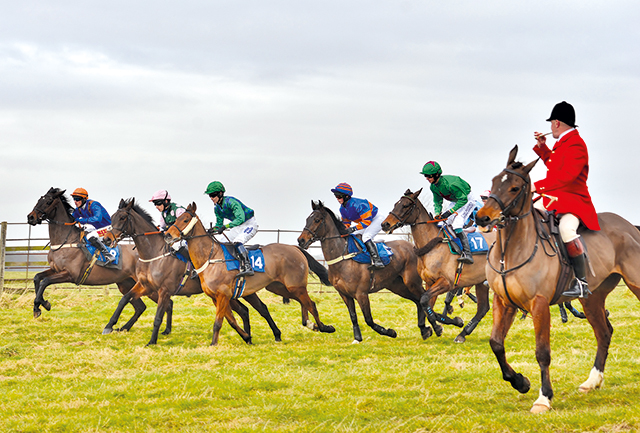 The sport of point-to-point racing originated in the 1800s when sporting gentlemen raced their horses from church steeple to church steeple — hence “steeplechasing” or from one point to another, a “point-to-point”.
The Brocklesby estate was one of the original locations of what is now recognised as National Hunt racing. The first recorded race was held in 1821 for a prize of 50 guineas, it took place between two horses, over a course of ten miles and seventy fences. The estate archives document the development of racing from these beginnings and by 1895 there were official meetings with five races on a permanent course, close enough to Brocklesby railway station for horses to be walked to the track from the station.

The Brocklesby Steeplechases were very popular and continued up to the 1930s but ceased during the war. In 1943 the racecourse buildings and equipment, including the rails, fences, number boards etc. were sold. This brought an end to the era of National Hunt racing at Brocklesby, but after the war the horse racing tradition was revived, and the point-to-point has taken place every year since. Initially racing took place at Swallow but was moved to the current course in 1958. The course is well known as one of the best in the country, with the old turf providing good going and eighteen beautifully built birch fences. The meeting consists of seven races for up to twenty horses, with races run over three miles on a left-handed track.

Over the years point-to-pointing at Brocklesby has seen the involvement of many local owners competing to win the Countess of Yarborough cup, awarded to the winner of the Brocklesby members’ race. There are several local families with a long association with the Brocklesby Point-to-Point. In the 1960s Mr C J M Cottingham won the race five times, and the Cottingham family continue to enter horses and saddle winners in point-to-points today. In recent times, the members’ race has been won most regularly by the Strawson family, but last year Tom Strawson was pipped at the post by Clare Pickering, whose grandfather won the race in 1975. Both Tom and Clare have horses in training for a rematch this year.

A point-to-point has a very informal atmosphere and racegoers can get up close to all the action. Parking is right up to the course rails but come early if you want a good place in the front row. There are no grandstands or permanent facilities, but the view of the whole course is good, from the mound near the paddock, or from the rails. There’s a marquee with a bar (heated on cold days), on course bookmakers, a wide range of food outlets and plenty of other trade stands, but one of the best point-to-point traditions is to enjoy a picnic out of the boot of the car between races. There’s no dress code, but it’s an opportunity to put on your tweed coat and best country hat.

The 2019 Lincolnshire point-to-point season kicks off on 16th February at Brocklesby Park, by kind permission of the Earl of Yarborough. If you are new to point-to-pointing or a seasoned “pointing” enthusiast, you will be made very welcome and be sure to have a great day out in the beautiful surroundings of Brocklesby Park.