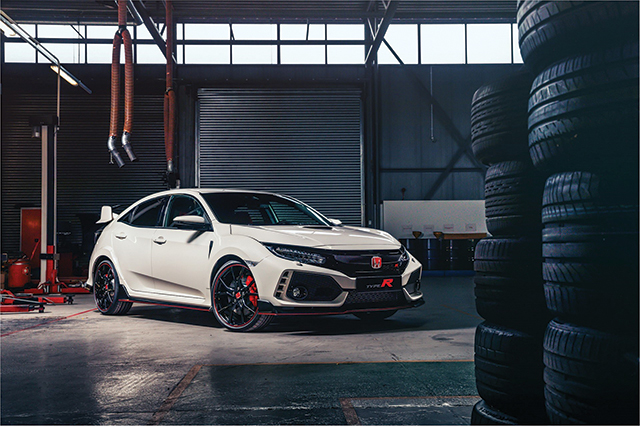 The Honda Civic Type R has triumphed in the coveted BBC TopGear magazine Car of the Year awards, taking a hat-trick of honours. Picking up the hot hatch of the year, international editors’ car of the year and then going on to claim the overall prize, car of the year.
The awards issue of BBC TopGear Magazine is their annual celebration of the very best cars of the year. As the world’s largest monthly car magazine, this year their awards went global with the editors of all twenty-two of their international editions voting for their favourite cars of the year.

Built in Swindon, the Civic Type R shares the same fundamentals as the new Civic hatchback and has been engineered from the ground up to deliver the most rewarding drive in the hot-hatch segment – both on road and on the racetrack.

“The Civic Type R isn’t just the best Hot Hatch of the Year, it’s the best Car of the Year,” said BBC TopGear magazine. “It’s addictive, rhythmic and devastatingly rapid; a true hero for the masses delivering accessibility and madness in one package. The thrill comes from the sheer single-mindedness of it.”

“This is absolutely outstanding to pick up three wins at the BBC TopGear magazine car of the year awards,” added Phil Webb, head of car at Honda UK. “And it is a truly global award with the international editors voting for the car as well. The kudos for picking up all three honours needs to go to the designers, the engineers and the associates at the factory that build the cars – without them none of this would have happened. This is a fantastic way to round off 2017!”

Available for under £300 a month, the Civic Type R has a top speed of 169mph and can do the 0-62mph sprint in just 5.7 seconds. The power comes from the 2.0-litre VTEC TURBO engine that has been optimised and refined to produce 320PS with peak torque of 400Nm.