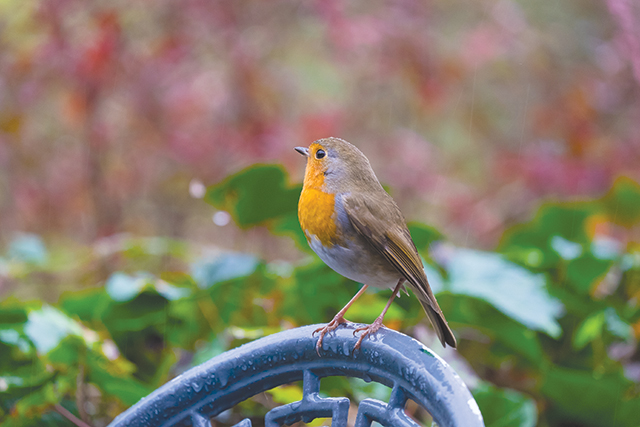 For some weeks now we have been engaged in the nesting activities of a number of birds in our garden, now our garden will be similar to many of yours in as much as it is in the middle of a busy village with houses on all sides.
This does not detract from the abundance of birds that seem to both visit on a regular basis as well as finding it a suitable nesting area. As I write this we have nesting in our garden a robin in the shed, a blackbird in a hedge, a blue tit in a box by the back door, a woodpigeon in a bright yellow Forsythia bush as well as a number of house sparrows nesting both under the roof tiles and in a multi house box that I put up under the eaves. All these birds seem quite happy to go about their business despite our comings and goings in and about the garden.

We have for some years enjoyed the nesting endeavours of most of these birds but it is the robins that have captured our imagination and to a certain extent our hearts as we have been able to watch them at close hand as they went through the process of producing a family. Now despite the fact that we have had this shed for the best part of twenty years this is the first time that the robins have seen fit to use it. It started back in April when I noticed bits of moss and leaves on the floor, this is not unusual as the door is nearly always open in the day time and debris gets blown in on a regular basis, but then I spotted some on my work bench and realised something was going on. Looking up to a ledge over some oil bottles it was clear a nest was under construction. Not wishing to obstruct their access in any way I decided to open the window as the door was frequently closed particularly at night and when we were out, the birds took to this immediately and were soon observed carrying nesting material in at a steady pace. Very quickly we saw the first egg, swiftly followed by three more with mum sitting tight despite my getting up close for a photograph and going in and out. As I write this four healthy chicks are getting ready to fledge as both parents work tirelessly to keep them fed in preparation for their step into the big wide world.

Of course it’s not just the robins that are reproducing at the moment, in the shooting world preparations are well under way for the oncoming season with thousands of pheasants and partridges being reared and released on shoots, both large and small, all over the country. The need to rear and release some birds is paramount if a shootable surplus is to be had. Shooting for sport in all its forms makes a huge contribution to the management of the countryside as well as the conservation of its flora and fauna, the provision of woods and game cover benefits not just the pheasants and partridges but so many other birds and animals. This management does include the control of some predators such as foxes, crows and magpies thus helping vulnerable ground nesters like curlew, skylarks and lapwings. I was recently very fortunate to see a lapwing with four little chicks no bigger than bumble bees, they seemed so vulnerable but the parent bird is a great protector and will go to great lengths if her little ones or her nest is threatened. Often feigning injury she will flap along the ground appearing to be injured to lure the predator away before miraculously recovering and flying up out of danger.

Mentioning bees, I came home the other evening to find a swarm of honey bees attached to my garden fence. Obviously this swarm had left a hive somewhere with a queen and were looking for a new home, this is normal behaviour and nothing to fear. A quick call to a local bee keeper had them all safely in a box and on their way to a new hive before dark. Left to their own devices they would probably have found a safe refuge at some point but there is always the risk that they may set up home somewhere that conflicts with human activity, better safe than sorry.

The clay shooting project at Brandon Wood is gathering momentum with traps ordered and the renowned ninety foot high tower is now refurbished. We know there is an abundance of wildlife on the site so we set up a small motion activated infra-red camera and have already seen two species of deer, foxes, badgers and hares as well as countless small mammals. You would be surprised what is out and about while we are asleep.