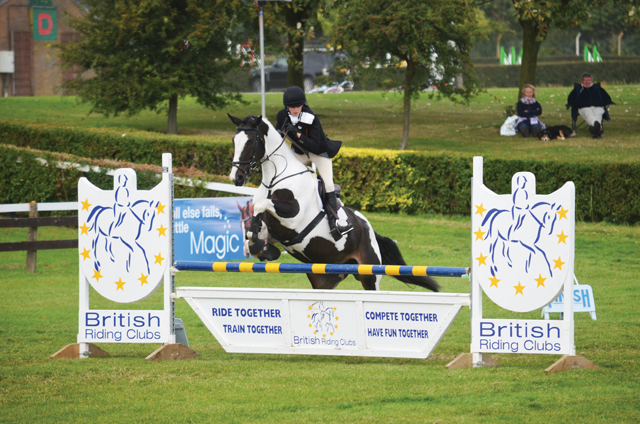 Another year draws to a close and what a year it has been. It seems that 2013 is going to be pretty tame by comparison yet we all know that it will have its own exciting challenges and results. The good thing about equestrian life is that it never ends. Even this month and next there are events all over the county to keep us on our toes so those of us in the horse world don’t hibernate, we just pull on another blanket. Here’s hoping that everything you wish for in December comes your way whether you are polishing a trophy you won during the year, competing for another, travelling to London for Olympia or simply treating your pony to a new dandy brush. Keep calm and enjoy!
The British Riding Clubs’ National Championships sponsored by Natural Animal Feeds (NAF), took place on the 15th and 16th September at the Lincolnshire Showground. The two-day event was thankfully blessed with good weather, allowing competitors to show their skills and for spectators – who were made welcome and not charged admission – to enjoy the fine performances.

The National Championships is the largest event in the BRC calendar and saw more than 1,800 competitors take part with finalists contesting titles in dressage, show jumping, riding test and style jumping. There was also a chance to compete in the Rural Riders team dressage, where six team members rode a test in the arena together. This year also saw the introduction of the first-ever elementary dressage class for juniors, which reflected the rising standards within the junior membership.

British Riding Clubs is the United Kingdom’s largest movement for amateur riders, made up of more than 430 Affiliated Clubs and 21 Riding Centres and has in excess of 36,000 members. The clubs span right across the UK, from the Orkneys to the Channel Islands and will certainly be nurturing the future stars of tomorrow in equestrian sports – no doubt, Lincolnshire will have its fair share.

PLEASE DON’T FORGET…
The evenings are dark these days and horse owners and equestrian groups in Lincolnshire have been urged to get involved in a new campaign after a series of attacks on animals.

Recent incidents include an attack that killed a mare and its unborn foal. Another horse had its tail and mane chopped off.

A Horse Watch scheme has been launched to try to tackle the problem.

As part of the initiative a Facebook page will be set up so people can share alerts and crime prevention advice.

Rider, Nicola Latham said she would be “devastated” if anything happened to her horse.

She said: “You always think ‘not my horse, not me’, but unfortunately some days you go down and it’s you.”

The scheme has been set up to tackle horse cruelty and thefts of animals, or costly horse equipment.

Amanda Barnett, from Humberside Police, said: “The Horse Watch scheme highlights the potential for owners to lose their animals to thieves.

“It’s not just the horses that thieves target but also equine equipment including tack and trailers.

“By joining the Horse Watch scheme, it will enable owners to share information and hopefully reduce this type of crime, that will also lead to the detection of offenders.”