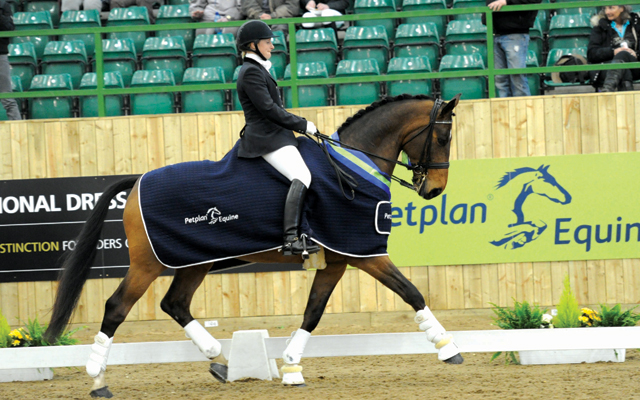 North Lincolnshire’s Lara Dyson claimed her second national title in two years at the NAF Five Star
Riding her own Cyden Perplex, she was the clear winner in the Petplan Equine Advanced Medium Restricted Area Festival Championship with a score of 71.47% – the only rider in the class to break the magic seventy per cent barrier.

Lara and Cyden Perplex are no strangers to the electric atmosphere at Hartpury, having won the Albion Medium restricted title last year; so this year’s win is a further step up the ladder of success. Cyden Perplex is a German-bred gelding which Lara brought to Britain as a ‘naughty’ six year-old and it’s taken her just five years to get him to this level.

After her win she said: “My horse was exceptionally excited this morning so I gave him a good workout with Michael Eilberg. I’m normally trained by his sister, Maria but she was unable to come so he stepped in. I was worried I’d overdone it as I felt in the arena he didn’t quite have the spark I wanted and felt a bit disappointed but all that changed when I got my score! I’m really pleased with the result as I made the decision to focus on training rather than competing this winter and it’s really paid off.”

Lara works full-time to support her riding hobby spending four days a week working for Cyden Homes and one day on her own equestrian coaching business, Inspiring Minds. She is also active in her British Dressage region as Members’ Representative on the Northern committee.

…AND AMY PROGRESSES TOO
Louth dressage rider, Amy Miller was delighted to be awarded wildcards for two of her horses at the British Dressage National Winter Championships Pet Plan Finals which took place in Hartpury, Gloucestershire last month.

Her seven-year-old warmblood, Mare Charade competed in the preliminary final and her ten-year-old stallion, Temple Valentino took part in the novice restricted final.

Amy was selected thanks to her good scores during the qualification event, the Sheepgate Area Festival, last October.

She said: “I knew the standard would be very high and I aimed to finish in the top fifteen and get through to the second rounds.”

In fact on Valentino she finished 15th and 14th in her two classes on the Saturday and 26th on Charade in her Sunday class.

“Both my horses worked well and achieved good scores in higher levels,” Amy added. “I went with the intention of enjoying myself and gaining more experience for the horses and myself and we did exactly that.”

Amy enhanced her reputation with an impressive double victory at the British Dressage Senior Home Internationals in Monmouth last October.

Called upon as a reserve, she won the preliminary event, on Temple Valentino, and was part of the England northern region group that triumphed in the team event.

So she is looking to build on the form that saw her win individual and team British honours last October. Valentino, a former showjumper, has qualified for six major championships and advanced through three levels of competition – all inside a year of competing in dressage.
The horse is owned by Roger Strawson and trained at Brookhouse Farm in Scamblesby, near Louth.

SPOTLIGHT ON BULBY EQUESTRIAN CENTRE
If you are looking for a friendly Pony Club Centre, British Horse Society (BHS) and Association of British Riding Schools (ABRS) approved riding school in the south of the county why not visit Bulby Equestrian Centre near Bourne?

Bulby offers riding for those aged four and above across a wide range of abilities. As well as riding or receiving lessons, visitors can generally spend time with the horses and ponies helping to groom and care for them.

The yard is owned by James and Susan Bevan. It is registered as a riding school with South Kesteven District Council and inspected by their veterinary surgeon, which means that the yard meets welfare and safety standards expected of a registered riding school and is properly insured. Well met BHS, Pony Club and ABRS inspections means that the yard’s standards are high. Staff are CRB checked, are generally well known to the yard and are local – some even having grown up and trained at the yard.

There is so much going on at Bulby, from events to Pony Club fun and tuition, that getting in touch is essential. Why not call 01778 591186 and have a chat with Nat the yard manager?

DID YOU KNOW?
As well as all being very successful eventers, Mary King, Zara Phillips and William Fox-Pitt have something else in common: they all began as members of the Pony Club.

OLYMPIC DREAMS
Britain’s showjumping team manager, Rob Hoekstra will be selecting his Olympic team this month with the official announcement expected at the start of next month. It is almost a certainty that one name on the list will be Whitaker – but which one? What has that got to do with us here in Lincolnshire? Well, one thing is that we’ll be cheering them on and the other is that it is only four years until the next Olympics. Wouldn’t it be the perfect time to get behind the many excellent potential riders we have in this county and support their bids for the next one. What do you think?

RIDE TO HELP AIR AMBULANCE
Fancy mounting up to help the Lincs Air Ambulance? Then Castledyke Equestrian Centre has just the date for you. On Sunday, 1st July there will be a Pleasure Ride of seven miles to include water complex and other cross-country jumps (all of which are optional) followed by a barbecue. A donation from the proceeds will go to Lincs Air Ambulance.

THE ‘RED, WHITE & BLUE’!
As we all get caught up in London 2012 fever this summer, following on from the Queen’s Diamond Jubilee celebrations, we should be very proud of the level of ‘horsepower’ on British soil this year.

There has never been a better opportunity for our nation’s equines to take centre stage here at home, from the Queen’s pageant of horses to those equine athletes giving their all for a medal at the Olympic Games 2012.

Equestrianism is the only Olympic sport in which men and women compete equally. This is not a sport that is won or lost purely with brute strength, stamina or endurance; it is a partnership of horse and rider in complete harmony with each other and putting their trust 100% in each other to achieve their best. An incalculable amount of hours will have gone into each and every horse and rider partnership competing this summer; they will be at the top of their game and we can all appreciate the commitment and dedication that has been put in to get them there. Our equine friends will at least be acclimatised to the (rather inclement) weather for the Games this time around, having battled high altitude and extremes of heat and humidity at past events on the world stage. It will be a fantastic opportunity to see our horses and riders showing off their talents, all with the home crowd very much behind them.

So the ‘Red, White and Blue’ will be in force this summer in the UK as we look back on an extraordinary sixty years on the throne for our monarch and look forward to our country hosting a spectacular Olympic Games. It is a great time to be patriotic and proud!